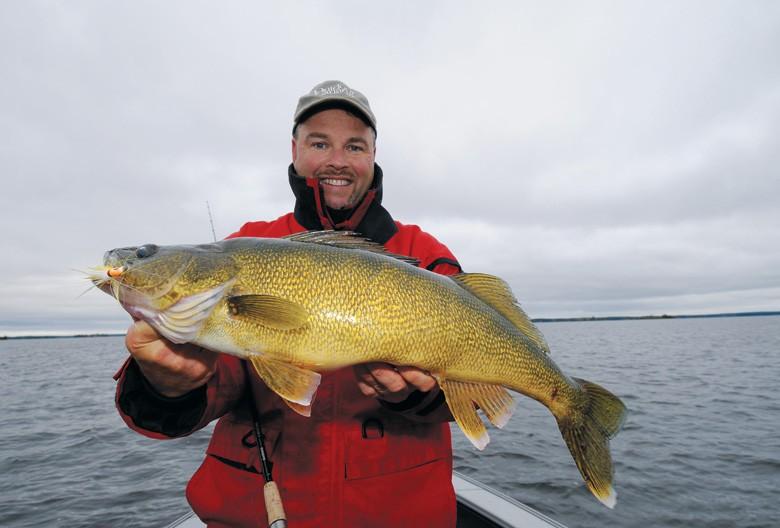 Knowing how to find walleye wallowing in the weeds is one thing, but attracting, triggering and hauling them out of the grass is something else again. To get that job done, expert anglers Jim McLaughlin and Frank Pugelj rely on the same lure—a bucktail jig. While the two top walleye sticks have never met one another, after listening to them extol the virtues of bucktails, you’d swear they’ve been snooping inside each other’s tackleboxes.

“A bucktail jig is the only thing I’ve ever found that doesn’t junk up with weeds,” says McLaughlin, who won the Canadian Angler Hall of Fame’s Rick Amsbury Award of Excellence in 2009. Pugelj agrees, saying he often has a dozen rods strapped down on the casting platform of his boat, and every last one of them has a bucktail jig dangling from the end of the line.

Not that either angler simply pitches out a hairy jig and expects to reel in a fish. In fact, if you think McLaughlin and Pugelj are obsessed about scoping out weedbeds, wait until you see how they fret over selecting just the right jig, not to mention the proper presentation.

Both weed warriors favour 1/4- and 3/8-ounce banana- and shad-shaped jigs for 90 per cent of their fishing. The other 10 per cent is spent ripping a 1/8-ounce bucktail in shallow water or swimming it over the tops of deep weeds. And while their jig boxes are stuffed with every conceivable colour combination, both pros reach for the same predictable patterns when the fishing conditions are tough, such as following a cold front.

“I always use a dark-coloured bucktail jig when I’m fishing weeds growing in the dark-bottomed holes,” says Pugelj. “Black-and-red and black-and-green are my two favourite combinations, but any colour will work so long as it’s primarily black.”

McLaughlin says that black is also his favourite jig colour these days, especially combined with sparse amounts of red. In fact, white is no longer even an option.

Pugelj says he used to catch plenty of walleye pitching light-coloured bucktails resembling shiners, smelts and shad—so much so, in fact, a white bucktail jig used to be one of his go-to favourites. These days, he rarely gets a bite. “I don’t know why it is, but I can’t catch anything on a white bucktail jig these days,” he says.

When it comes to the presentation, meanwhile, the two pros differ somewhat. For his part, Pugelj insists the only way to fish a bucktail jig is with a heavy-action baitcasting outfit—and not just any heavy-action set-up, either. The walleye ace uses five-foot three-inch to six-foot three-inch, extra-heavy-action rods he fashions from longer Shimano muskie sticks. How so? He cuts off a portion of the tip so the final product is extra stiff.

“If your rod tip is the least bit flimsy, you can’t rip a bucktail properly,” Pugelj says. “You won’t feel a walleye hit it, either. I’ve tried many different rod actions and the stiffer the better.”

Pugelj spools his Curado baitcasting reels with non-stretch moss green Power Pro braided line, preferring 20-pound test for fishing around deep weedlines, where the vegetation is typically sparser. But when he moves into the thickest parts of the grass, where he says the biggest ’eyes always reside, he fills his reels with 30-pound test.

And if you’re wondering if Pugelj splices a stiff, invisible fluorocarbon leader between his jig and braided main line, the answer is no. Instead, he ties the braid direct to the jig, insisting it helps the bucktail glide down properly.

McLaughlin is just as adamant about using a six-foot three-inch rod for ripping bucktail jigs through the weeds, but the friendly giant prefers a medium-action Shimano Crucial spinning rod featuring an extra-fast-action tip. “There is something about that specific rod, teamed with any 2500 series reel spooled with 15- to 20-pound-test Power Pro braided line that is magic,” he says. “You can jerk the jig perfectly and get the job done.”

The discrepancy between Pugelj’s baitcasting equipment and McLaughlin’s spinning gear is apparent and no doubt a reflection of each angler’s personal preference. But keep in mind, too, that Pugelj often fishes in dense aquatic jungles, while McLaughlin plies his trade more often in deeper, less-dense patches of vegetation.

Fried vs. fresh line: Few things can help make you a better weed walleye angler faster than using braided line. With its thin diameter, it’s easier and more accurate to cast—especially when the wind is blowing—and it slices through thick weeds like a razor blade. Braided line is also super-sensitive, so you’ll feel bites immediately. And since braided lines don’t stretch, hooksets are instantaneous. As a general rule, well-used braided line is preferred for most fishing applications. But that’s not the case when you’re fishing for weed walleyes, as supple, fried braid tends to float and hold back your jig. So when you’re hunting for big fish in the thick stuff, be sure to spool on some fresh line first.

Big Jim’s jigs: Big Jim McLaughlin ties bucktail jigs for several tackle stores in southern Ontario, where his custom creations are much in demand. “The black-and-purple jigs fly off the shelves,” says McLaughlin. “Guys fight for that colour combination.” Also extremely popular is his perch pattern, complete with chartreuse hair in the middle. “It looks like a bumble bee,” he says, “and it stings!”