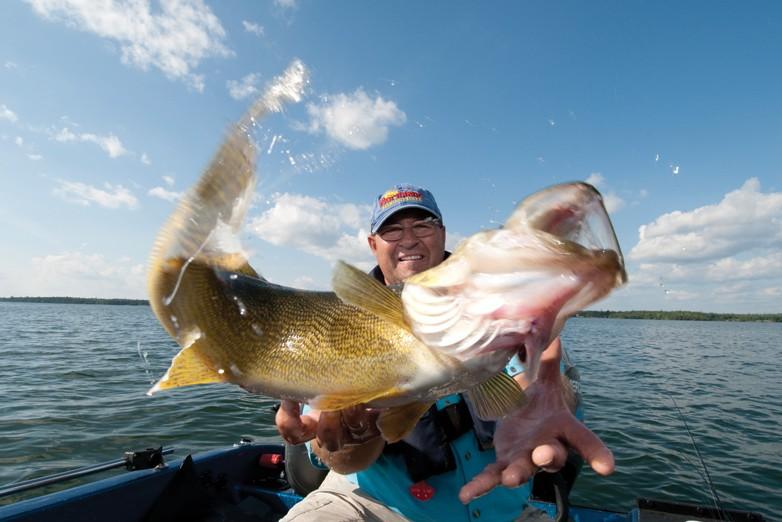 Once you know where to find walleye in the weeds, and you’re geared up with the proper tackle, what’s the most effective way to present your jig?

McLaughlin says the best place to start is along a deep weedline where the vegetation is sparser. Make a long cast, let the jig settle to the bottom, point your rod tip toward the lure and pop it hard, quickly ripping it five to six feet off the bottom. Then pause, drop your rod tip so it’s pointing toward the jig again, retrieve the slack and repeat the process. Eventually, you’ll automatically set the hook into a brickyard walleye when you rip the lure.

“It’s scary how hard they hit it, because the jig looks like nothing in the water,” McLaughlin says. “But the fish will just smash it. And you just can’t be afraid to pop the jig really hard. You have to rip it.”

Once you’ve acquired a feel for the pop-pause-fall cadence and gained some confidence working the outside weed edge, it’s time to move into the thick stuff for some jungle warfare. And it’s here that Pugelj is in a world of his own.

Like a soldier on a mission, he stands at the front of his boat, his foot operating the electric trolling motor, flipping and pitching a bucktail into every hole—and up against every weed clump—he can see. As soon as the jig reaches the bottom, he rips it up.

Sometimes he lets the jig fall back down, but as often as not, he quickly reels it in and chucks it into another tiny opening. If you didn’t know better, you’d think he was fishing for largemouth bass. If he knows the walleye are on a weedbed, in fact, and this tactic is not producing the number of strikes he thinks it should, Pugelj says he won’t hesitate to slow down and manipulate the bucktail in the same, slow, drag-and-pause manner as a bass angler.

Especially when he’s fishing after a cold front, or forced to fish water that is clearer than he prefers, Pugelj will pitch a bucktail beside a clump of weeds, let it fall, then slowly drag it along the bottom. At times like these, when he finds the walleye are inactive, he’ll even deadstick the jig, letting it lie motionless. Eventually, though, he’ll feel the telltale tap on his bait and slam the hook home.

“Most of the time, the fish will hammer your bucktail,” says Pugelj. “You can’t rip it fast enough. But other times, you need to be more precise and move it more slowly. The fish are always there. You just have to adjust.”

With confidence like that, Pugelj—like McLaughlin—is one walleye angler who never misses the boat.

The way of the wind: The same wind that can make for great weedbed fishing can also make it difficult to fish. Most anglers mistakenly let their boats drift with the wind as they glide across the weeds; since walleye almost always face into the wind, that means the anglers will be retrieving their lures behind the fish, out of their line of sight. A much better strategy is to use the electric trolling motor to fish into the wind for maximum depth and speed control. Also, use a heavier 3/8-ounce bucktail and lighter 20-pound-test braid, and make short, precise pitches to specific openings. That way, your line won’t billow and your jig will drop straight down. Sure, it can be tough fishing into the wind, but the rewards are worth it.