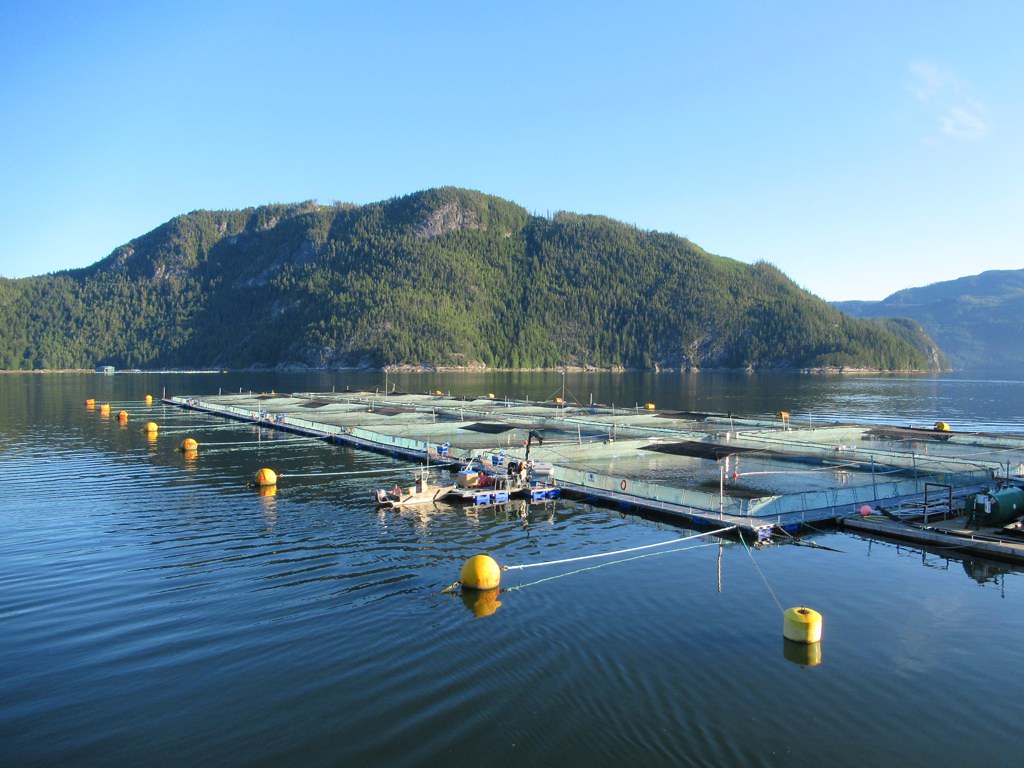 To save wild fish stocks, fish farms must be moved off the water

To save wild fish stocks, fish farms must be moved off the water

Every recreational angler should support putting fish farms on dry land—and keeping them from getting in the water in the first place. In-ocean farms create many serious problems for wild salmon that can easily be avoided by moving operations onto land: billions of sea lice that kill off fry on their way to sea; both viral and bacterial diseases; harmful waste and chemicals; and escaped farmed fish interbreeding with wild stocks in the East and inhabiting rivers on both coasts.

Farmed fish have the most carcinogens and fat of any meat. Ethoxyquin is added to their fish-based feed to keep the oils from going rancid, and to keep the feed from blowing up in storage; first developed as a pesticide, it can cause disease in humans. Fish-based feed itself has killed off 19 of the 20 top global pelagic forage fish, while growing soy for feed instead causes massive deforestation.

In-ocean farms affect both the West and East Coasts, with the East Coast needing quicker action—North America’s Atlantic salmon stocks have dropped from a high of 1.7 million fish between 1971 and 1985 to as low as 400,000 since 1995. On the West coast, meanwhile, the sockeye population has declined from a huge 1900 level of 100 million fish in just one river, the Fraser, to only 273,000 fish in 2020 after a century of Fisheries and Oceans Canada managing them into extinction. That really is where we are.

A big problem with in-ocean fish farms is that once they are established, it is difficult to get them out. We in B.C., for example, have been complaining for more than 30 years, with 75 per cent of residents—some 3.8 million people—against open-water aquaculture. (It should be noted that Bernadette Jordan is the first Fisheries and Oceans minister to phase out in-ocean fish farms, ordering 19 facilities to be removed from the Discovery Islands; another 17 farms are also closing in the Broughton Archipelago at the request of First Nations.)

Ontario is poised to go down the same path as B.C. In 2019, the provincial government established regulations that fish farms like, allowing the Great Lakes to be infested with in-water trout farms. Ontario residents are now looking at decades of arguing to get them out.

The aquaculture industry makes politicians swoon with its promises of jobs and revenue. You’ll find that politicians never stop supporting the industry and, in some cases, offering it cash. And they put regulations in place that seldom result in investigations, let alone prosecutions. Much of the industry’s promises are mere spin, however, complete with vastly inflated or deflated numbers.

In B.C., for example, fish farms claim to provide 7,000 jobs, a figure that Fisheries and Oceans also quotes. However, the provincial government’s own economic research agency, B.C. Stats, says the number is only 1,800. And with Norwegian automation coming to Canada’s fish farms, the number of jobs on both the East and West Coasts stands to decline by almost 10 times.

And now the freshwater farms in Lake Huron and so on are offering the same spin from Norway’s so-called blue revolution of the 1970s: we bring jobs and revenue to down-on-their-luck rural towns; we don’t want to harm the environment; we’ll take rules and regulations, as we have nothing to hide. Don’t listen to this, and don’t let them establish any more farms.

Indeed, in-lake fish farms carry the same problems as their saltwater counterparts, including escaped fish. That means wild steelhead and other trout will be compromised by interbreeding and displacement. And the sewage will be an even worse problem than it is with saltwater operations, as there are no currents to disperse the waste. It will simply spread and spread, creating huge algal blooms. The sewage costs will be astronomical, too, considering the huge $10.4 billion price tag B.C. is already facing.

So, with all these threats considered, why put fish farms in the water at all? As recreational anglers, we should urge our governments to instead offer the aquaculture industry low-priced licences to operate on land, and even provide crown land for purchase or lease. The costs will be more than worth it, considering the high price of letting things remain the way they are. The future health of our precious fisheries are more than worth it.