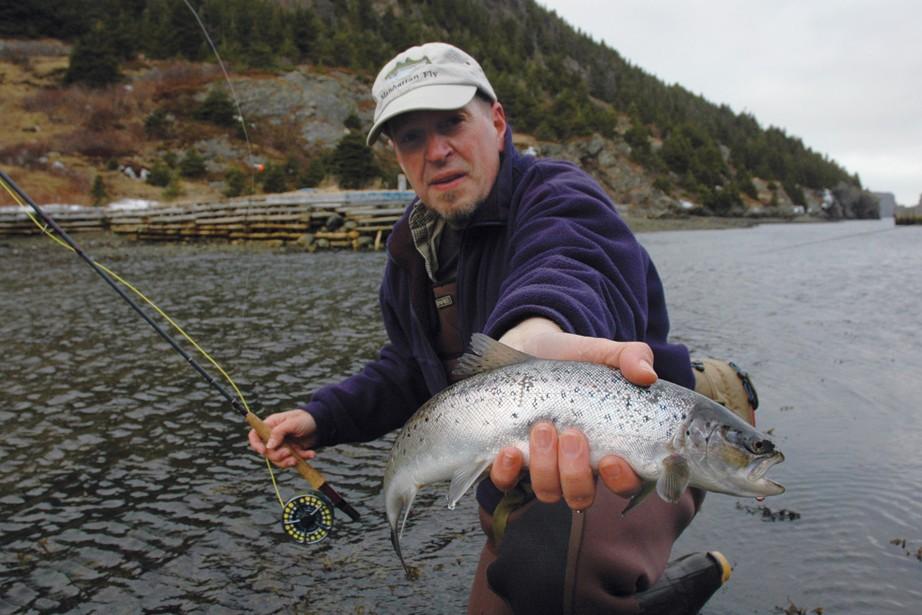 Toughing it out with sea trout

Sea trout anglers, a hardy band of souls, brave the harshest winds, rain and snow squalls nature can muster to outwit what might well be the planet’s wiliest of angling adversaries. The British have been casting fur, feather and spinner for their beloved Salmo trutta since the dawn of fishing. And when the British say “sea trout,” they mean sea-run browns native to Europe and Asia—the way they see it, there’s simply no other anadromous trout worthy of the title.

All of which explains why, in the late-19th and early-20th centuries, British expatriates transplanted sea-run trout from Scotland and England to such diverse and remote corners of the British Empire as Argentina, Tasmania, New Zealand and Newfoundland. As a result, today Newfoundland boasts a world-class sea trout fishery that rivals any other, all within the most densely populated region of the province—the Avalon Peninsula.

Both anadromous and resident freshwater brownies are highly prized gamefish. And while genetically identical, they’re quite distinct from an angling point of view. The freshwater brown is typically fished in tranquil lakes and alpine streams. Not so with the sea-runs, and that’s where the harsh weather comes into play.

Where, when, and how

Newfoundland’s sea trout season runs from the start of February to early October, with the Waterford River a prime choice for early-season winter fly fishing. Flowing right through the heart of St. John’s, the river holds one of the planet’s densest populations of sea trout.

The Waterford is a small river, and a stealthy approach is well worth the effort. It’s best to sit on the bank while casting to maintain a low profile-these fish aren’t called wily old browns for nothing. Dead-drifting nymphs produces great results just about everywhere browns swim in Newfoundland. On the Waterford, in particular, it’s not at all unusual to hook dozens of two- to three-pounders during a single winter outing.

For those less inclined to chilled bones, the river fishes well throughout the season, particularly in early fall, when the returning sea trout are rotund and feisty from a summer of foraging in the protein-rich North Atlantic. Or, you can fish in the sheltered bays when summer sea trout are at their absolute prime. Trolling lures is the most common and effective approach at this time of year, but a few innovative anglers have had good results with saltwater fly tactics.

Along Conception Bay from Avondale to Salmon Cove, there are many more rivers, both big and small, that are also home to sea-run browns. Sea trout fishing is very much a tidal affair, and nearly all these rivers flow into tidal estuaries with towns built around them. With a few exceptions, falling tide is best. The favoured technique is wet flies fished with either a slow retrieve or the classic swing. Many anglers also use spinning gear, typically throwing Rapalas matching the local baitfish populations. No matter how you tackle them, the fight is sure to leave a lasting impression.

Average size: Two and a half pounds

Spin anglers should use a seven- to eight-foot, medium-action spinning rod with a reel, spooled with six- to eight-pound test, that functions properly in both cold weather and saltwater. Smaller trolling rods and reels also work well in the salt.

For fly fishing, use 10-foot, six-weight, medium-action rods for general estuary fishing, and nine-foot four-weights for smaller rivers. Tie on floating or sink-tip lines to match the rod weight, as well as long, tapered leaders with four- to eight-pound tippet. And make sure you have a saltwater-resistant reel with a robust drag.