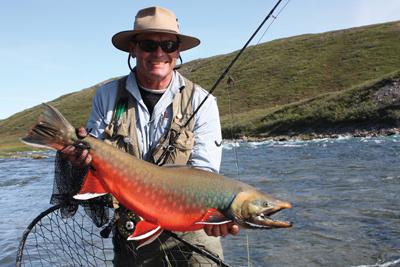 In 2011, Best for world-record Arctic char

No one knows for sure why the mighty Tree produces such giant char. It could be the fish gorge on the Arctic Ocean’s abundant forage before entering the river, itself rich in forage. Or maybe the intense competition for redds simply weeds out the little guys. Then there’s the catch-and-release policy maintained by sole outfitter Plummer’s Arctic Lodges, along with the low pressure—just 250 anglers get a crack at the Tree each season. Whatever the case, the fish average 10 or so pounds, double that of most other char waters, and expectations for even bigger fish are completely justified. In all, the International Game Fish Association recognizes eight world records out of the Tree, including the coveted all-tackle record, a 32-pound nine-ounce behemoth caught in 1981. No wonder the river lures anglers from the world over. Australia’s Frank Bluch, for example, has visited twice, chalking up one IGFA fly rod record and another one pending from just this past season (both fish are pictured above). As for me, I didn’t break any records during my trip to the Tree River a few years back, but I’m pretty sure I’ll never catch two 20-pound-plus Arctic char again in my life. Unless, of course, I’m lucky enough to one day return to the Tree.

When to fish: August is best.

Where to fish: From camp, upriver to the Third Falls; don’t miss the Presidential Pool.

In 2008, Arctic char; Beautiful fish and scenery When to fish: August.

Where to fish: The deeper pools—Presidential Hole is my favourite—or current breaks.