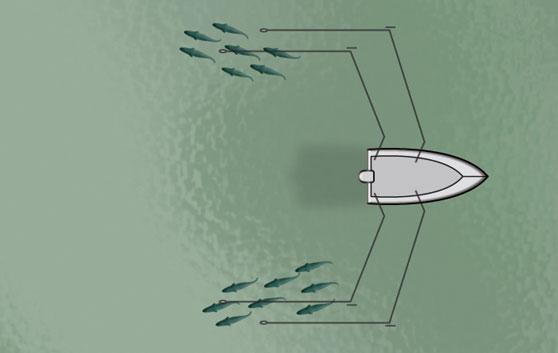 Fishing for walleye in clear water

Clear water is the walleye angler's worst enemy. Here's a few tactics for beating it

“It was unbelievable.” Even famed walleye pro Ted Takasaki seemed surprised back in April 2002 when he set a one-day walleye tournament record for a five-fish limit. “Simply unbelievable.” His total weight that day? A staggering 53.2 pounds, which also topped the record for six fish. Most walleye anglers will never even catch a 10-pounder, but Takasaki’s five fish that day averaged more than 10 and a half pounds each. And he caught them in conditions that give most walleye anglers fits: water so clear you could see the Bluenose on a dime lying on the bottom of the lake.

Not that Takasaki wants zero visibility when fishing for walleye. Instead, he prefers water that’s ever so slightly stained, offering visibility down to roughly two feet—or enough to see the skeg on his outboard. Think Perrier with a healthy twist of lemon. That, he says, is perfect for walleye fishing. In reality, though, many walleye lakes are often as clear as gin.

So how does the 1998 Professional Walleye Trail World Champion catch one of the most light-sensitive species of fish in crystal-clear conditions? By turning what most anglers consider a negative into a positive.

“I see clear water as an opportunity because the walleye can see a lot farther,” says the affable Takasaki, who is also the president of Lindy Little Joe. Sure, the fish shun bright conditions and frighten more easily, he says, but they also feed primarily using their eyesight. “So if you carefully pick and choose your spots and adjust your presentations,” he explains, “you can overcome clear water.” Here’s how.

Learn more about the lake bottom

Takasaki laughs when he hears anglers say that walleye in clear-water lakes are always in deeper water, more easily spooked and suspended off the bottom. While he concedes they’re usually skittish, he says they’re not necessarily down deep, nor are they always suspended.

Instead, their exact location depends on the shape of the lake’s basin and what they’re eating. So once you know what the bottom of the lake looks like and what the fish are feeding on, Takasaki says, you’re well on your way. But how to get to that point?

“Most anglers look at a clear-water lake and say, ‘Jeez, where do I start?’” says Takasaki. He suggests anglers should begin by studying a map of the lake’s bottom contour. Is it flat, featureless and shaped like a bowl? Or is there plenty of structure, such as underwater points, shoals, reefs and saddles?

As for what the walleye are eating, is it perch, suckers, shiners or small baitfish that hold close to the bottom and around structure and cover? Or are they feasting on ciscoes, smelts or shad that roam the water column? You can get a pretty good idea simply by marking the positions of the fish on the sonar.

With all this in mind, you can then decide on your presentation. Basically, Takasaki recommends anglers use slow, vertical presentations, such as jigging, for walleye concentrated on the bottom or on structure, and a faster, horizontal presentation, such as trolling, for suspended walleye. Either way, he always starts in the weeds.

When fishing a clear-water walleye lake, Takasaki always starts in the weeds. He tosses a leech-tipped jig into the pockets and slowly retrieves it through and over the tops of the stalks. When jigging over structure, Takasaki focuses on the edges, where the fish tend to gather in the shadows.

Indeed, the first thing Takasaki looks for when he fishes a clear-water walleye lake is a lush weedbed—preferably cabbage-in 12, 14 or even 16 feet or more of water. Find that, he says, and you’ll almost always find walleye. Next comes the technique.

“I like to drift over the vegetation with a light, weedless Veggie Jig tipped with a lively leech,” says Takasaki. “I’ll slide it through and over the tops of the stalks. If that doesn’t work, I’ll position a few marker buoys on the outside weedline and park my boat out off the edge. Then I’ll toss the jig into the weeds and let it settle into the pockets before I slowly drag it out.”

Takasaki sticks with a similar vertical approach if weeds are scarce but the crystal-clear lake has lots of structure and bottom-oriented baitfish. That’s when you can almost be certain you’ll find walleye glued to the bottom and concentrated in bunches, he says.

As Takasaki notes, most clear-water lakes on the Canadian Shield have lots of structure. “So what I like to do,” he says, “is take a little heavier jig, usually a 1/4- to 1/2-ounce Max-Gap or Fuzz-E-Grub tipped with a minnow and work it a little faster. I might drift over the reefs, points, bars and shoals and fish the edges of the structure so I am vertical. Typically in the summertime, I’ll be targeting structure in 20 feet or more of water.” And, more precisely, he’ll be targeting the shadows where the fish tend to gather.

Takasaki also keeps an eye on his sonar. He says the depth the walleye are at, and how they’re relating to the baitfish, helps him determine his strategy. For example, if he’s marking fish within 18 inches of the bottom, they’re undoubtedly relating to the structure. In that case, he sticks with the jigging approach. “But,” says Takasaki, “if I see the walleye come up off the bottom, scatter and suspend-a sign they’re chasing forage-that’s the signal for me to bring out the planer boards and start covering water.”

Takasaki’s innovative trolling technique was responsible for that record-breaking catch back in 2002. And when it comes to walleye suspended in clear water, no one can catch so many big fish as fast as he can. Indeed, Takasaki’s attention to clear-water trolling detail is astonishing-right down to why the lakes are so crystal clear.

“Many walleye lakes are clear to begin with,” explains Takasaki, “but improved water treatment has cleaned up others. And since zebra mussels have invaded many systems, especially the Great Lakes and interconnected lakes and rivers, the water has cleared up tremendously.”

Few anglers are better at catching clear-water walleye than professional angler and northwestern Ontario guide Larry Snow, who was the top rookie in the Professional Walleye Trail’s Western Division last season. Snow attributes his clear-water success to a variety of strategies: using clear monofilament and fluorocarbon instead of braided line; attaching 10-, 12- or even 14-foot-long snells when Lindy rigging; and fishing the peak late-afternoon and evening walleye bites. But his key tactic is to increase his trolling speed (to as much as three miles an hour) when he’s fishing crankbaits. Snow believes that if you can see the bottom 20 feet down, walleye can see 30 to 40 feet away. By trolling quickly, though, the fish can’t closely inspect your lure, which forces them to make a snap decision. And often, that decision is to take a bite.

Because of that, he says walleye anglers must change their tactics to get the fish to bite. His solution: troll with planer boards to get the lures away from the boat, since the boat itself will spook and disperse the fish as it travels overtop of them.

If you don’t have planer boards, Takasaki recommends trolling straight behind the boat-a technique called flatlining-using spinner rigs or deep-diving crankbaits attached to lighter-than-normal bottom bouncers. Lighter bouncers and slightly less pronounced diving lures force you to let out more line in order to get the lures to the desired depth, and that means they’re trolled much farther behind the boat than usual. This way, when you pass over and spook a group of walleye, they’ll have regrouped by the time your lures reach them.

It’s a brilliant technique, and one that I’d never heard of before Takasaki came along. It’s so effective, in fact, that he’s now incorporated it in his preferred method of spreading out his lines with planer boards. “If I hadn’t spread out my lines with the Cannon Rover in-line planer boards,” he says, “I never would have set the record.”

According to Takasaki, many anglers say they rarely see walleye on their sonar when they’re trolling in clear water. But, he points out, it’s not because the fish aren’t there. “It’s because the fish swing out to the sides as the boat approaches,” he explains. “In clear water, your boat casts a big, dark shadow that spooks the fish. But when you use planer boards, you can turn that negative into an advantage by gently nudging or herding the fish over to your lures.”

Generally when trolling, the line from the planer boards should be at a 45-degree angle from your boat. And when you’re trolling at one and a half miles an hour in 30 feet of water, a two-ounce bottom bouncer produces that result. Of course, Takasaki uses slightly lighter bottom bouncers, meaning he also has to let out a little more line to get the bouncer down to the bottom. Doing so changes the angle of the line a bit, but in clear water that’s fine.

And, as you can imagine, Takasaki is forever fidgeting with the weight of his bottom bouncers. As a result, his company’s X Change model bottom bouncers come in handy, letting him quickly add or subtract weight without having to tie on a new bouncer.

As for trolling rigs, Takasaki’s favourites are spinner harnesses and crankbaits. When pulling harnesses, 90 per cent of the time he uses nightcrawlers, partly because they work best when the water temperature is 10°C or warmer and partly because he can troll more quickly and cover water more efficiently than with a minnow or leech. Takasaki’s favourite cranks, meanwhile, include deep-diving Reef Runners, Husky Jerks, Rattling Rogues and 24A Bombers.

Takasaki also says that the clear water defines his choice of lure colours-metallic copper, gold and silver, and neutral shades such as blue or purple work best. Purple works so well, in fact, that Takasaki says he always runs at least one purple crankbait or spinner harness when trolling. On the other hand, he avoids the chartreuse, hot orange, green, pink and white rigs most often used in stained water.

For many walleye anglers, fishing in clear-water lakes is the toughest game in town. But you won’t find Ted Takasaki in that crowd-he loves it. And if you follow his simple techniques, you’ll soon see why.

When he’s trolling, walleye pro Ted Takasaki always knows precisely how much line he has out—and, specifically, the exact distance between his lure and his planer board. This is key, he says, in order to keep your lure where the fish are biting. “If you don’t know how far back your lure is, you don’t know how deep it is running,” he says. “And once you catch a fish, you won’t be able to put your lure back where it was.” Takasaki looks after this crucial detail by using a reel equipped with a line counter. But, he notes, anglers can achieve almost the same degree of accuracy by marking their lines every 10 feet, or by counting the number of times the guide moves across the face of their baitcasting reels when they let out line.