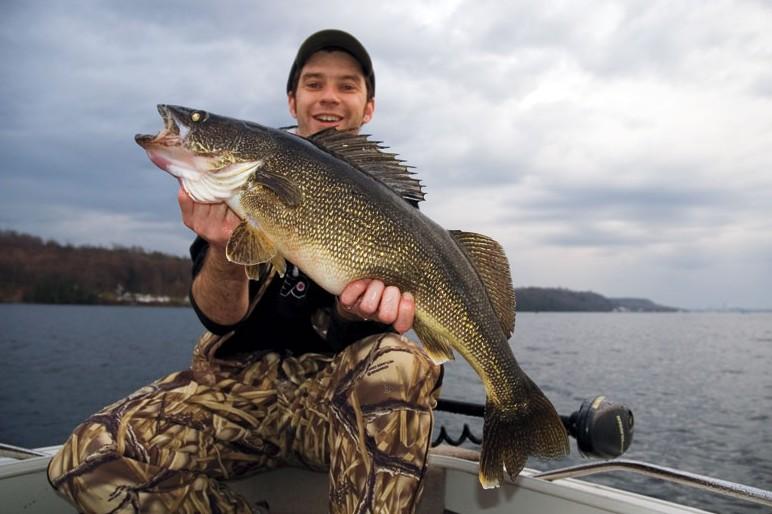 You learn early on in the fishing game to never guarantee results. Still, I wasn’t worried when I assured some friends two falls ago that they’d catch the biggest walleye of their lives on Ontario’s Bay of Quinte. It was an easy promise to make, given I had struggled to catch a single walleye under 10 pounds the previous two seasons. On one memorable outing, in fact, I averaged one double-digit walleye for every hour of trolling. And my biggest piece of ‘eye candy pulled down the scale to well below the 13-pound mark.

While I already knew Quinte is home to more giant walleye than anywhere else on earth, the location wasn’t the only reason for my confidence. I also knew we’d be trolling stickbaits held down by snap weights and positioned perfectly by in-line planer boards. There isn’t a walleye pro in North America who would hit the water without a good supply of these key components. And while this tackle trio is usually the ticket to the biggest walleye, you’re making a mistake if you think it’s only applicable to suspended, trophy-sized fish.

Actually, trolling stickbaits with snap weights and planer boards is the best-kept secret throughout the open-water season for big bruisers, as well as for numbers of walleye. And it doesn’t matter whether you’re fishing in rivers, reservoirs, bays or small- or medium-sized lakes. Indeed, it’s the versatility of the tactic that makes it so splendid. Here’s how it works.

Let’s assume for the sake of explanation that the local dock talk reveals the walleye are being caught in 29 feet of water. The fish may be hugging bottom along shorelines, or suspending off the edges of underwater reefs or in the middle of the water column-it really doesn’t matter, as long as you know what depth they’re at.

The first step is to attach a slender, shallow-running, minnow-shaped stickbait to a snap on the end of one line. Stickbaits have proven time and again to have the shape and profile walleye prefer most. Lures such as the Rapala Original Floater, Tail Dancer and Husky Jerk, as well as the Storm Thunderstick and Lucky Craft Pointer, are perennial favourites no matter where you fish.

The only thing you need to know about each specific lure is how deep it will dive depending on the amount of line you let out, and the line’s pound test. For this information, I rely on the guidebook Precision Trolling, which shows the different depth curves for many popular lures based on the length and type of line or leader they’re attached to.

Needless to say, the guide’s depth curves eliminate the guesswork. For example, I know that my favourite #14 Husky Jerk will dive to a maximum depth of eight feet when I let out 90 feet of 10-pound-test monofilament. By the way, it won’t go any deeper than eight feet, no matter how much more line I trail behind the boat. But I know I can take it down to 9.5 feet if I spool up with 14-pound-test FireLine, which has the diameter of six-pound-test monofilament.

Either way, eight or 9.5 feet is a far cry from the 29 feet we need to get the lure down to reach the fish. And that’s where the snap weight comes into the formula.

Tactic tip: Go with the wind

When trolling for walleye with stickbaits, snap weights and in-line planer boards, you’ll almost always catch more fish by moving with the wind. This makes it easier to set out your boards, control the speed and direction of your boat and land big fish. Plus, the movement of the waves imparts critical action to your baits. In fact, when you mark a school of active walleye on your sonar and begin catching fish, it’s far more productive to circle back upwind of the hot spot, being careful not to run directly over the fish. That way, you come back down with the wind rather than troll into it.

Snap weights are nothing more than 1/2- to three-ounce, cylindrical-shaped sinkers with a padded clip attached to one end. You can make your own snap weights using bell sinkers, alligator clips, O-rings and plastic tubing, but the ones made by Off Shore Tackle are so good, so simple to use and so inexpensive, I don’t know why anyone would bother.

As for attaching the weights to your line, the so-called 50/50 method is best when you’re trolling shallow-running stickbaits. Simply let out your lure and 50 feet of line, snap on the appropriate amount of weight, then let out another 50 feet before attaching your planer board (see next section).

You can also use the deep-diving versions of the lures mentioned-as well as many others-in conjunction with snap weights. If you do use deep divers, though, it’s important to clothespin the weight onto your line 20 feet up from the lure. Then, simply keep in mind that when you add a one-ounce sinker, your lure will go down 33 per cent deeper than its original dive curve.

So, if you’re trolling a #12 Deep Husky Jerk that normally runs 19 feet deep when you let out 250 feet of line, you can place the same lure in front of a school of giant walleye swimming in 25 feet of water if you attach a one-ounce snap weight 20 feet ahead of the lure.

After you’ve caught walleye using the 50/50 rule with shallow-running stickbaits and the 20-foot rule with deep divers, you can start adding heavier snap weights farther away from the lure, which takes them even deeper to where the biggest ‘eyes often lurk. This requires constant experimentation, but by referring to the dive curves in Precision Trolling, you can discover new depths to fish.

In-line planer boards are small, highly visible, orange or yellow wooden or plastic planks with weighted bottoms. They’re bevelled on one end so that when you snap them onto your fishing line and throw them into the water, they sail well off to the side of your boat, towing your lure behind them (they’re clearly marked as either right or left models for use on the appropriate side of the boat).

With plenty of planer boards, three or four anglers can quickly cover a giant swath of water, making planers perfect for prospecting while keeping your lines from tangling. But you have to follow a few basic rules.

First, when pulling identical lures or those that dive to the same depth off all your planers, run the longest leads behind the farthest outside boards. And always set them out first. Run slightly shorter leads-say 15 feet or so-to each remaining board, with the board with the shortest lead closest to the boat. If you’re straining different depths, though, always put the shallowest running stickbaits on the outside.

Spreading out your lures this way, particularly in clear-water lakes, rivers and reservoirs, will send your success rate soaring, because the noise and shadow of your approaching boat will herd the schools of walleye into the paths of the oncoming lures.

Clear water, however, isn’t the only place where this tactic works. Some of my most memorable walleye catches have been in stained water-usually along windblown shorelines-when aggressive ‘eyes flood knee-deep water within 100 feet of shore. When that happens, stack all the boards off the side of the boat that’s closest to land. This allows you to stay in considerably deeper, safer water, where you won’t spook the fish by trolling over them, or risk nicking your prop on a rock.

When trolling in-line planer boards and snap weights, it’s often difficult to tell if a walleye has taken your bait. That’s because your line runs out at an angle to the board, then makes a sharp turn back to the lure. Plus, you often have let out 150 feet or more of line. So, any time you spot the board suddenly drop back or rock up and down, get on your rod. Off Shore Tackle also makes a neat accessory called a Tattle Flag, which you can add to your planer boards. When a fish hits, this spring-loaded flag gets tugged down.

When you see your board hop, pop, dip or merely act differently, it’s a sure sign a walleye has inhaled your lure. But you don’t need to set the hook. Simply pop the motor into neutral and keep your rod tip high, relying solely on your rod and reel to keep steady pressure on the fish.

The first step is to carefully reel in the board, unhook it and let it fall to the floor. Continue reeling, keeping the rod tip high and the shaft curved to maintain steady pressure on the fish. When the snap weight approaches, unclip it and continue reeling slowly, relying on a moderately light drag setting until you slip the net under the fish.

When it’s a double-digit walleye, you’ll appreciate the complementary benefits of the stickbait, snap weight and planer board. You’ll be grateful, too, that you didn’t have to eat your words after promising your buddies the walleye-of-a-lifetime. But that rarely happens when you take advantage of what just might be the hottest walleye technique of all time.

I favour an eight-foot, medium-action downrigger rod that has a soft tip and bends evenly under pressure. High-capacity, level-wind reels with line counters, meanwhile, are even more essential, because you need to know exactly how much line you have between the lure and snap weight, the snap weight and planer board, and the board and boat. That way, when you get into a school of walleye, you can use precisely the same leads on every rod and reel in the boat. It’s also wise to have rod holders on your boat when you’re pulling boards, especially when you’re setting out several set-ups.

What happens if you have two or more planer boards off each side of the boat and you hook a walleye on the one farthest out? How do you avoid tangling your lines? It’s easy, as long as the person with the fish doesn’t immediately start reeling. Instead, keep steady pressure on the fish while another angler feeds out line to let the inside board drift well behind the boat. When it’s far enough back, the person with the fish on can usually pass his rod underneath the inside rod and fight the fish in the water directly behind the boat.