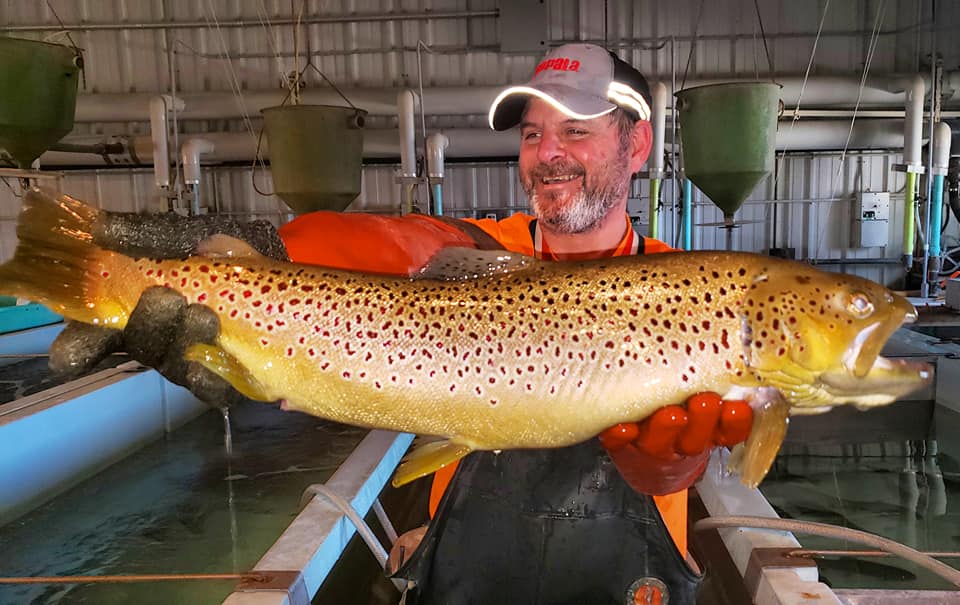 I was scanning my social media contacts the other day when I happened to spy fishing buddy Jeff Matity holding up a beautiful brown trout. But Jeff didn’t catch the fish the usual way, instead, he dipped it out of a holding pen at the Saskatchewan Fish Hatchery in Fort Qu’Appelle, where he helps manage the facility. He was carefully testing the mature female brood stock—browns and brookies—to see if they were ripe and ready to be stripped of their eggs. They weren’t yet, he reported, but they would be shortly.

Given that the water temperature in the small trout lakes around my Northwestern Ontario neck of the woods have dipped well below the 10° C spawning threshold, and the fish are past the peak of the spawn, I flipped a note to Jeff expressing some surprise at what seemed to be a slow start to the season out his way. It started a back and forth dialogue that, as always, included some fascinating fish facts.

“I think it’s because of the constant 10° C temperature of the groundwater flowing through our facility,” Jeff said. “The lakers in our donor lake are triggered most significantly by a sudden drop in temperature, from 12°C to 8° C and we have documented them holding their eggs and delaying spawning for weeks beyond our typical harvest date, if it is a year with extended warm water temperatures. It could be another concern for climate change affecting cold-water species, as a later egg drop gives the eggs fewer developmental days before their correctly projected hatching date. But our fish also have two other egg laying triggers—photoperiod and chemical communication.”

As most anglers know, brown, brook and lake trout spawn in the fall, and while the eggs and milt in individual fish mature at different times, Matity says he is always shocked by how remarkably close to one specific day it happens each autumn.  And get this: He has now enticed rainbow trout, which spawn in the spring, to lay their eggs in the fall as well.

“Rainbow trout are genetically spring spawners,” he says. “You’d think it would be complicated, but we can effortlessly convert them to fall spawners by mixing them in with the browns and brooks.

“My strong sense is that fish have incredible olfactory intelligence, and the pheromones being passed in the urine of egg-developing female brooks and browns spurs the biological clock of the rainbows. This is further confirmed, in my mind, by the fact that stocked rainbow trout from our fall-spawning stock, mature to be spring spawners.”

Matity went on to tell me, however, that while he has been able to convert his brood stock rainbows to lay their eggs in the fall, it happens at a much later date compared to the brook trout and brown trout in the facility.

“The brookies will be ready within the next week or so,” says Matity, “overlapping with the browns.  But the rainbows will just be starting when the brooks are done. And individual female rainbows will ripen all the way into January.”

Moving into the realm of splake, the beautiful brook trout/lake trout hybrid, Matity says success sometimes comes at a cost. “We have traditionally harvested milt from male brook trout in White Gull Creek, which is only a few kilometres away from our donor lake trout lake, White Swan Lake,” he says. “But, in recent years, with the social media promotion of our stocking efforts, White Gull has received an intense amount of fishing pressure, leaving us with very poor milt harvesting results.

“To solve the dilemma, we now take milt from our brood stock male brookies and put it on artificial extender, akin to human sperm cryogenic technology. We also induce our hatchery males by keeping them in total darkness and virtually starving them for six weeks. Then we harvest the milt and hold it dormant. When it is time to use it, we add a sperm activator.  Amazingly, after doing rigorous fertilization trials, the results are exactly the same.

“Photoperiod manipulation, along with food ration manipulation, in other words starving the trout,” Matity chuckles, “are additional factors we use, in contrast to Mother Nature’s go-to method of a sudden and sustained drop in water temperature.”