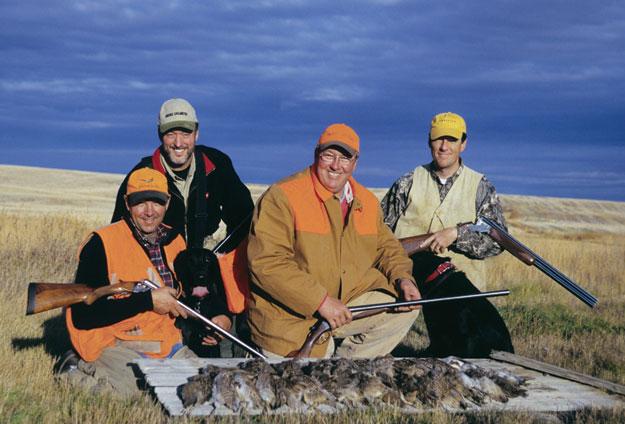 What stage are you at as a hunter?

If you’ve been hunting for a long time, you’ve likely noticed that your attitude about the sport has evolved over the years. But have you ever wondered how your perspective shifts? In the late 1970s, two professors from the University of Wisconsin surveyed deer hunters in an attempt to understand these changes.

They identified five distinct, though not mutually exclusive, stages of hunter development, each one reflecting a different facet of hunting behaviour. There’s no clear-cut right or wrong with any given stage, and not every hunter moves through each level. Nor does every hunter move through the various stages in the same order—influences such as mentoring and actual time spent afield play a huge role in how each of us evolves.

So, where are you on the evolutionary scale of hunter attitudes? Or perhaps more importantly, where would you like to be?

At this level, it’s all about the excitement of squeezing the trigger. Getting afield and shooting at live targets is the primary motivation, with success a secondary objective. Unbridled eagerness can lead to ill-founded decisions, making for a potentially dangerous partner. Shooting the wrong animal, wounding game and careless gun control are not uncommon. And yes, most of us were here at one time. Hunters at this stage require patient mentoring, practice at the range and field experience to keep evolving.

Here, the hunter has attained a measure of shooting proficiency, and hunting success and prowess are measured almost exclusively by the number of animals taken. Legal limits and closed tags are the only goals. The whack ’em and stack ’em hunters we’ve all seen fall within this level, and some never evolve further. The recent spate of hunting television shows are largely centred around this stage, setting a questionable example for impressionable new hunters. Maturity and extensive hunting experience are the prerequisites for hunters to evolve beyond this stage.

The trophy stage is characterized by ideals of quality over quantity. Hunters become significantly more selective in the game they pursue; those hunting antlered game, for example, may hold out for the oldest and largest animals, while duck hunters may opt for a drakes-only approach. Patience and perseverance are fundamental to success, and a certain pride is gained through passing up animals many would otherwise take. Unfortunately, the selectivity inherent to the trophy hunting stage is often portrayed by anti-hunters as being unsportsmanlike—they maintain it’s *only* the antlers hunters seek, and that the meat is being wasted. This is, however, a patently untrue characterization of the vast majority of trophy hunters.

This level is all about the “how.” Hunters gain satisfaction through understanding the behaviour of the game they pursue, and strategically applying that knowledge. They challenge themselves further by making self-imposed limitations, such as only hunting with a specific type of firearm, or opting to still-hunt instead of hunting from a stand. Taking game remains important, but it’s secondary to the methods used. Interestingly, some hunters adopt strict methods even before they’ve moved on from the previous stages.

The total experience is what motivates hunters at this stage—what game is being hunted, how it’s taken, the camaraderie of the hunt, and complete immersion in a natural outdoor experience. Some have suggested this level represents a mellowing of a hunter’s drive. Others argue it more accurately represents a level of maturation and sophistication, and that hunters at this stage are as driven as ever—they’re just seeking more diverse rewards for their efforts.

The Giving Back Stage

While this particular stage wasn’t identified in the University of Wisconsin study, it’s certainly part of the evolution of the hunter, based on what I’ve witnessed over the years. Namely, at some point many hunters become primarily motivated by the desire to pass on their wisdom, experiences and values to others, often inspired by thoughts of legacy and heritage. To that end, they’ll assume volunteer leadership roles with the likes of conservation organizations and mentored hunting programs. When it comes to the future of hunting, this just may be the most important stage of all.