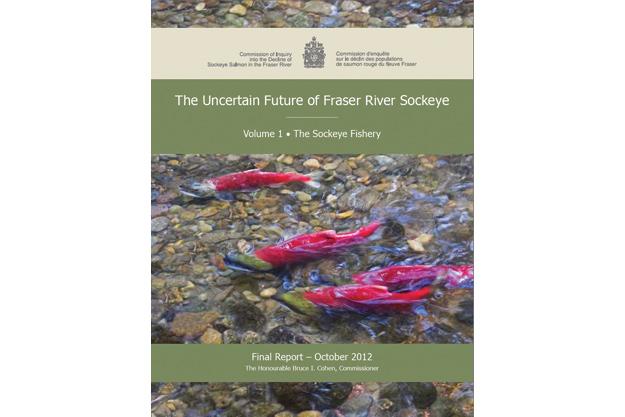 What you need to know about the Cohen Commission

After more than three years in the making, the long-awaited report from the Commission of Inquiry into the Decline of Sockeye Salmon in the Fraser River—popularly known as the Cohen Commission—was finally released late last fall. Entitled The Uncertain Future of Fraser River Sockeye, the three-volume report included 75 recommendations for improving the beleaguered B.C. fishery.

Why was the commission formed? In the late summer of 2009, approximately 10 million sockeye salmon were expected to return to B.C.’s Fraser River, but only one million fish showed up. It was the latest in a string of disappointments during two decades of steadily declining fish stocks, so Fisheries and Oceans Canada (DFO) appointed B.C. Supreme Court Justice Bruce Cohen to try to pinpoint the reason for the poor returns. Cohen was also tasked with determining whether changes needed  to be made to fisheries management policies and procedures. During the course of his investigation, he collected 2,145 exhibits, reviewed more than 500,000 documents and heard testimony from 179 witnesses over 138 days of hearings.

What were the findings? As many observers anticipated, Cohen said he was unable to find a “smoking gun”—a single factor causing the decline in sockeye stocks. Instead, he laid the blame on a variety of reasons, including habitat loss, climate change and the potential spread of disease from fish farms. “Further research is crucial to understanding the long-term productivity and sustainability of Fraser River sockeye salmon,” Cohen noted.

What are the recommendations? Among the 75 recommendations to improve the sustainability of the Fraser’s sockeye fishery, the report called for a freeze on fish farms in the Discovery Islands—situated along the sockeye migration route—until September 2020. It also recommended there be no increases in production for existing farms in the region, and a maximum one-year term for licences. Moreover, the report stated that if existing farms are found to pose “more than a minimal risk of serious harm” to migrating Fraser sockeye, the minister of fisheries and oceans should close them down immediately. As for the DFO, the report said the federal agency should get out of the business of promoting salmon farms and stick to conserving and protecting wild stocks. “As long as DFO has a mandate to promote salmon farming, there is a risk that it will act in a manner that favours the interests of the salmon farming industry over the health of wild fish stocks,” Cohen said at the time of the report’s release.

What’s next? At press time, the DFO was still reviewing the report and had yet to respond. For his part, Cohen says Ottawa should follow just one course of action: “I urge the federal government, in the interests of conserving this iconic species of salmon, to heed my findings and to implement these recommendations.”

To read the complete text of the Cohen Commission report, go to www.cohencommission.ca.