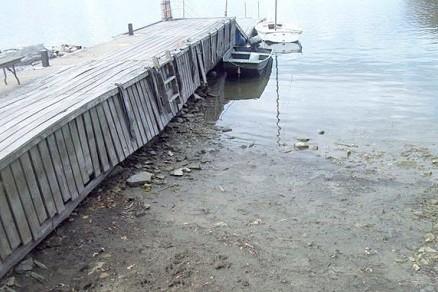 What you should know about Georgian Bay water levels

Lake Huron’s water level hit a record low this past February, an inch below the previous record set in 1965—and it’s still dropping. This is the 13th year in a row that water levels for Huron, as well as Lake Michigan, have been below average. In Ontario’s Georgian Bay, the drop is especially damaging, closing marinas, cutting off water access to cottages and disrupting the entire ecosystem—including the sportfishery.

Why the drop? Long-term dredging to maintain the shipping channel on the St. Clair River, the only outflow from Lakes Huron and Michigan, has gradually increased the discharge of water. Add to that drier and warmer weather, and you have last summer’s lake levels, which sat at 75 centimetres below normal. That’s crisis condition, according to the International Joint Commission, the Canada-U.S. body overseeing cross-border water issues on the Great Lakes.

What’s the impact on fish? The receding water is cutting off access to wetlands and some rivermouths, spawning habitat for fish such as walleye, lake sturgeon, northern pike and muskies; about 80 per cent of Great Lakes fish species need wetlands at some point in their life cycle. Muskies are especially vulnerable because the juveniles rely on shallow marshes. Over several years of study, in fact, researchers from Hamilton, Ontario’s McMaster University failed to find juvenile muskies anywhere in southern Georgian Bay. And as the water gets shallower, it also gets hotter during summer. This promotes algal blooms and bacterial growth, both implicated in the high mortality of fish and birds. Says McMaster researcher Pat Chow: “The entire food web is changing.”

How’s the sportfishing? It’s also changing. Shoals are now islands, and there’s much more shallow water. This is forcing fish into new habitat and anglers to find new fishing spots. “We’ve definitely noticed the small- and largemouth bass have moved to different areas,” says Terry Crawford, a member of the Georgian Bay Hunters and Anglers. “And the pike numbers are getting lower.” Ironically, muskie anglers are doing better, says Davin Heinbuck, who maintains a voluntary log of fishing effort for Muskies Canada. Over the last 10 years, Georgian Bay angling hours per fish caught dropped along with average size, suggesting that juvenile fish are doing okay. Heinbuck’s conclusion? “Nature has a way of adapting.” But not everyone agrees. “Long term, these fish are in trouble,” says Mike McKie, president of the Georgian Bay Musky Association. “If the low water levels continue for a number of years, I can’t even imagine the damage that could be caused to the muskie population and the overall fishery.”

What can be done? A plan to place submerged sills to slow the outflow of the St. Clair River was abandoned in 1972, but it arguably remains the best solution. The Sierra Club’s Ontario chapter says it would cost $200 million to install the fish- and boat-friendly structures, but both the U.S. and Canada would need to okay the plan. While Ottawa seems supportive, any such scheme would also require the approval of the White House and the U.S. Congress—something unlikely to happen any time soon.