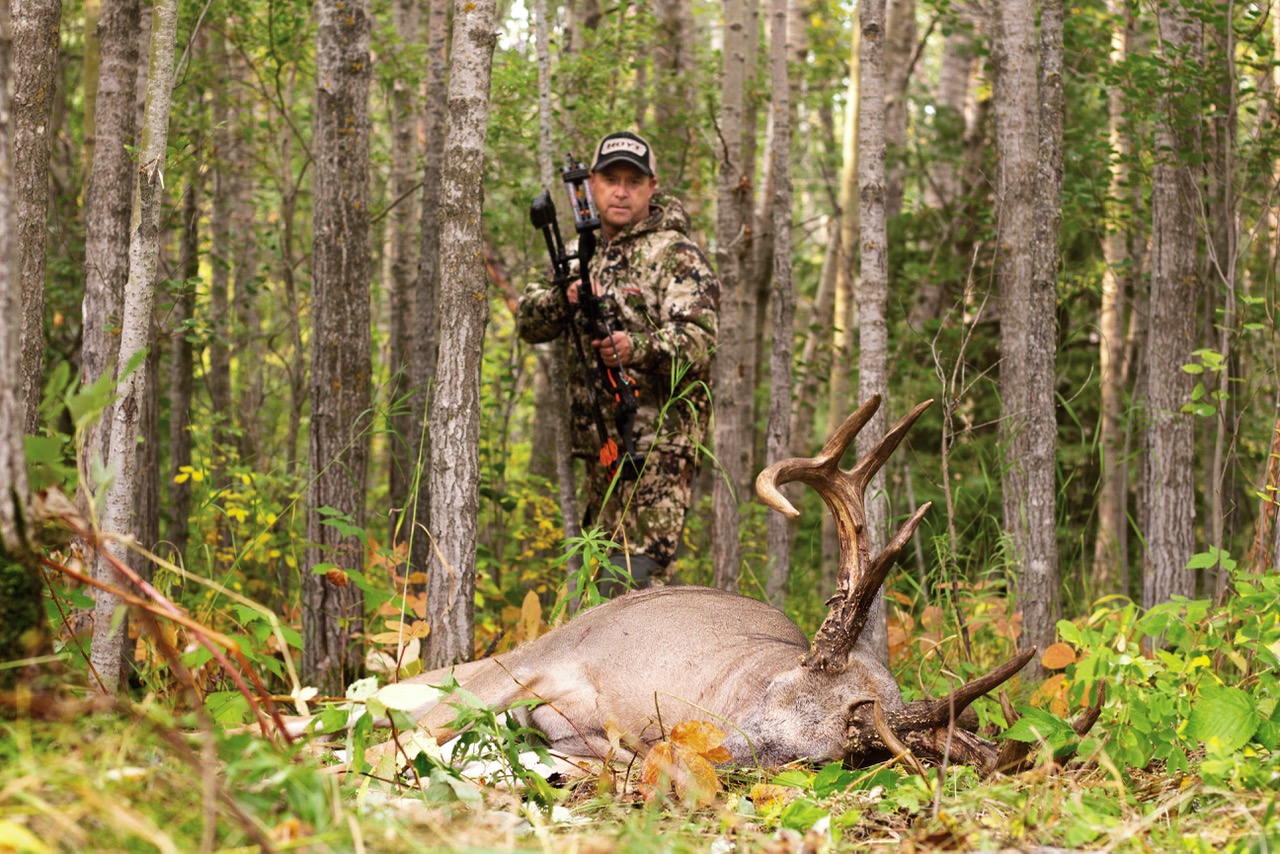 Why bowhunters should “take 45” before searching for downed game

Resist the urge to immediately search for a downed animal

After pulling back, I anchored and centered the sight pin on the buck’s chest, following the animal as it walked along. As soon as the deer paused, I released and my arrow passed clean through its torso. The massive buck raced forward, belly to the ground, then circled back 40 metres and vanished into the timber. No more than five seconds passed, then all was silent.

I was confident in my shot placement, but knowing it was better to be safe than sorry, I allowed an hour to pass before following up. I was rewarded handsomely for my patience—a surprisingly sparse blood trail led right to an impressive 160-class whitetail, just 10 metres from where I’d lost sight of him. Unfortunately, too many bowhunters lose game because they fail to likewise wait before following up on their shot. Here’s what you should consider before tracking an animal you’ve arrowed.

THE ANATOMY OF A KILL

Shot placement is the most important factor to consider in determining when and how to begin tracking shot game. First take into account where the arrow penetrated the animal. Many double-lung shots, especially on deer, involve less than a 50-metre run, then a pause before the animal falls.

With perfect shot placement—collapsing both lungs or damaging the heart—the retrieval of downed game is normally simple and straightforward. If major arteries or the liver have been damaged, your chances of retrieving the animal also greatly increase. A single lung shot, however, can complicate things, with the animal able to travel much further before dying; in some circumstances, it may even survive. A gut shot can also spell disaster.

In the end, it’s about sending your broadhead through as vascular vital organs to ensure massive hemorrhaging, a good blood trail and, most importantly, a quick kill. Regardless of the shot’s location, though, it’s important to wait at least 45 minutes before following up if the animal vanishes into the woods. More often than not, you won’t be disappointed if the shot was good. Fail to wait, however, and you risk pushing the animal and losing the blood trail. Waiting allows it to bed down unpressured, weaken and expire.

The only exemption to the 45-minute rule is if you actually can see that the animal is down for the count. Even then, savvy hunters still wait a few minutes before approaching. In the excitement of the moment, bowhunters too often rush in to collect their prize without giving the animal adequate time to expire. Remember, a broadhead kills by cutting the vitals and causing hemorrhaging, so it can take time for them to completely shut down due to the trauma.

THE DECISION TO SEARCH

If you make a less than perfect shot, or question how the animal reacted, you have some decisions to make. Consider where the arrow entered the animal, the depth of penetration, the damage it caused, and whether there’s an exit wound. All of these factors will affect how far the animal will go after the shot. But remember, this is not an exact science. The one sure thing about killing an animal with a bow is that the shots are rarely the same. Even when you make what appears to be an ideal shot, game can react in ways you never anticipated.

While the 45-minute rule is merely a point of reference and a minimum recommendation when a good shot is made, carefully consider waiting longer on shots that aren’t ideal. With a liver shot, for example, wait six to nine hours before following up. With a gut shot, wait for between 12 and 24 hours. When in doubt, back out, wait and return later. Avoid bumping your animal from a bed and pushing it. Bump it, and you risk losing it altogether.

If I’ve learned anything over three decades as a bowhunter, it’s that the decisions you make after the shot determine how likely you are to go home with meat for the freezer—or empty-handed.