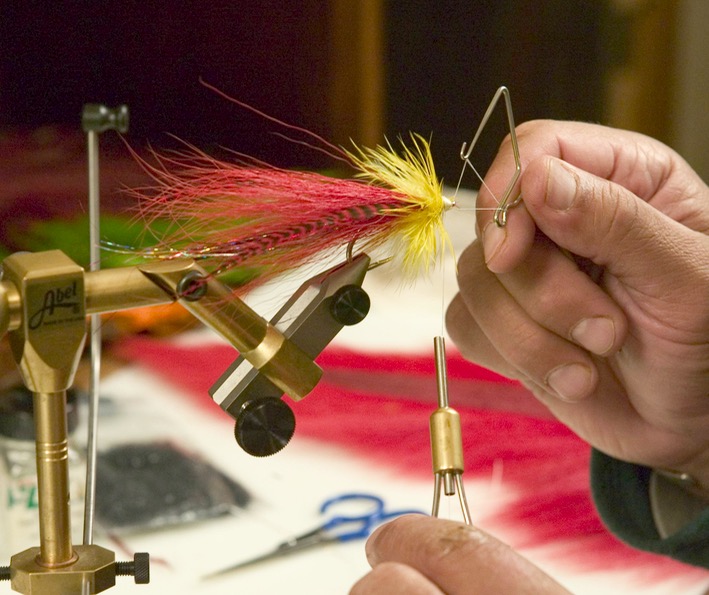 Why tying flies is the ultimate (indoor) winter activity

Along with sealing windows and pulling out snow boots, a sure sign of the approaching winter in my home includes the setting up of a small, semi-permanent fly-tying table in the living room. It’s not an ideal situation. The lighting isn’t great. The table is wobbly and too small. And I often have to defend stray materials from a sly feline possessed of an overdeveloped hunting instinct. Plus, the table’s very presence in the family parlour causes some sighing and eye-rolling on the domestic front. But having it there, close at hand and ready when I have a couple of free hours, is worth every bit of trouble.

[easy-tweet tweet=”@OutdoorGardner explains why tying flies is about more than just making fishing lures… but only if you want it to be ” user=”OutdoorCanada” hashtags=”flyfishing, flytying”]

I’m the first to admit that tying flies is kind of an odd thing to do. Why make your own fishing lures when you can buy them? Outwardly, it’s a pointless effort, like churning your own butter. But then, why make anything you can buy? Why even go fishing when there’s a market down the street? Because it’s about the journey, and what you learn and experience along the way.

Tying a fly begins with a recipe or a photo or just an idea, and a motley stack of fur, feathers, yarn and tinsel. At each step, you add features to imitate insect bodies, wings or legs, or to mimic the sinuous movement of a baitfish’s body. Often these features have been tested over generations; sometimes they’ve just popped into your head. But as you fathom how a fly is put together, you develop a feel for the prey it’s supposed to mimic, and the elements that attract the predatory fish you’re hunting. Despite the time, toil and money, tying flies only deepens your experience of fishing, bringing you even closer to the activity you love so much. Plus, it’s super fun.

Outdoor Canada associate editor Scott Gardner has tied more flies over the years than he’ll ever possibly use.