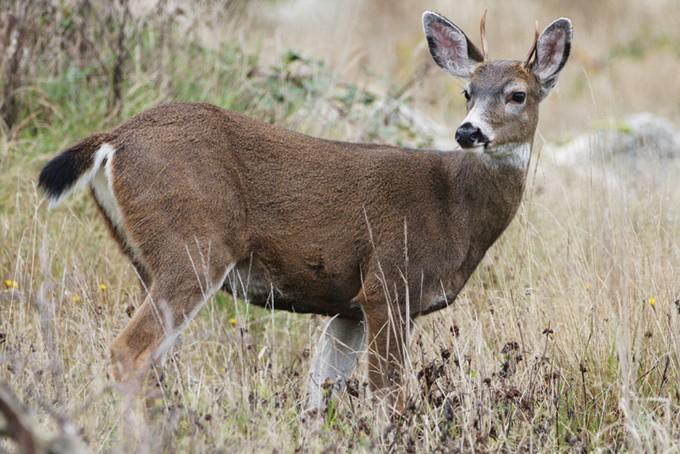 Everything you need to know about B.C.'s deer explosion

One deer per hectare may sound like a hunter’s dream, but on B.C.’s Gulf Islands it’s a nightmare. Research by Peter Arcese from the University of B.C.’s department of forest sciences shows the uncontrolled deer population is decimating local flora and fauna. The award-winning biologist’s solution? “We need hunters to take the place of predators to have a sustainable ecosystem.”

Why so many deer?

Blame a lack of predators, restrictive hunting regulations and imported fallow deer. Until they became extirpated, cougars and wolves kept the native black-tailed deer (a diminutive mule deer subspecies) in check. Then in the 1970s, local residents started supporting stricter hunting regulations, banning the sport entirely on some of the islands, which are located along the east coast of Vancouver Island. And in the 1990s, the provincial government abandoned a fallow deer farm—the non-native animals escaped, went feral and spread to other islands.

On the islands where deer are present, they exist in high densities, around one per hectare, and they’re devouring native plants. As an example, Mayne Island, which can reasonably support 200 or so deer, is now home to thousands. “Islands with high deer populations are missing many iconic species associated with the Garry oak ecosystem,” observes Arcese. Young arbutus trees and native flowers, for example, are now rare, and birds that rely on the plants are also disappearing. As well, the fierce competition for food leaves the deer hungry and scrawny.

What can be done?

Where researchers fenced in the natural ecosystem, many native species returned within a few years. Reducing the deer population, therefore, should restore the balance. The trick is figuring out how to do it. Based on other coastal islands with intact predator-prey systems, Arcese figures deer densities need to be reduced by as much as 90 per cent. Trapping and culling large numbers of deer could be an option, but Arcese thinks the most sustainable solution is more hunting. The islands are heavily populated, ruling out rifles, but bow and shotgun hunts could work. “If hunting is to be a solution,” he says, “it must be done at a sufficient intensity every year to control the deer population in the long term.”

While island residents are in favour of controlling the deer population, they’re literally gun-shy. Arcese suggests a little education and information would go a long way. “If the public understood that hunting was consistent with their environmental values to control the deer population, and we could do it safely, we would have a grassroots solution,” he says. The problem, he contends, is the province itself. Says Arcese: “The lack of response to these issues may represent an unwillingness by managers to engage a vocal minority opposed to population control.”