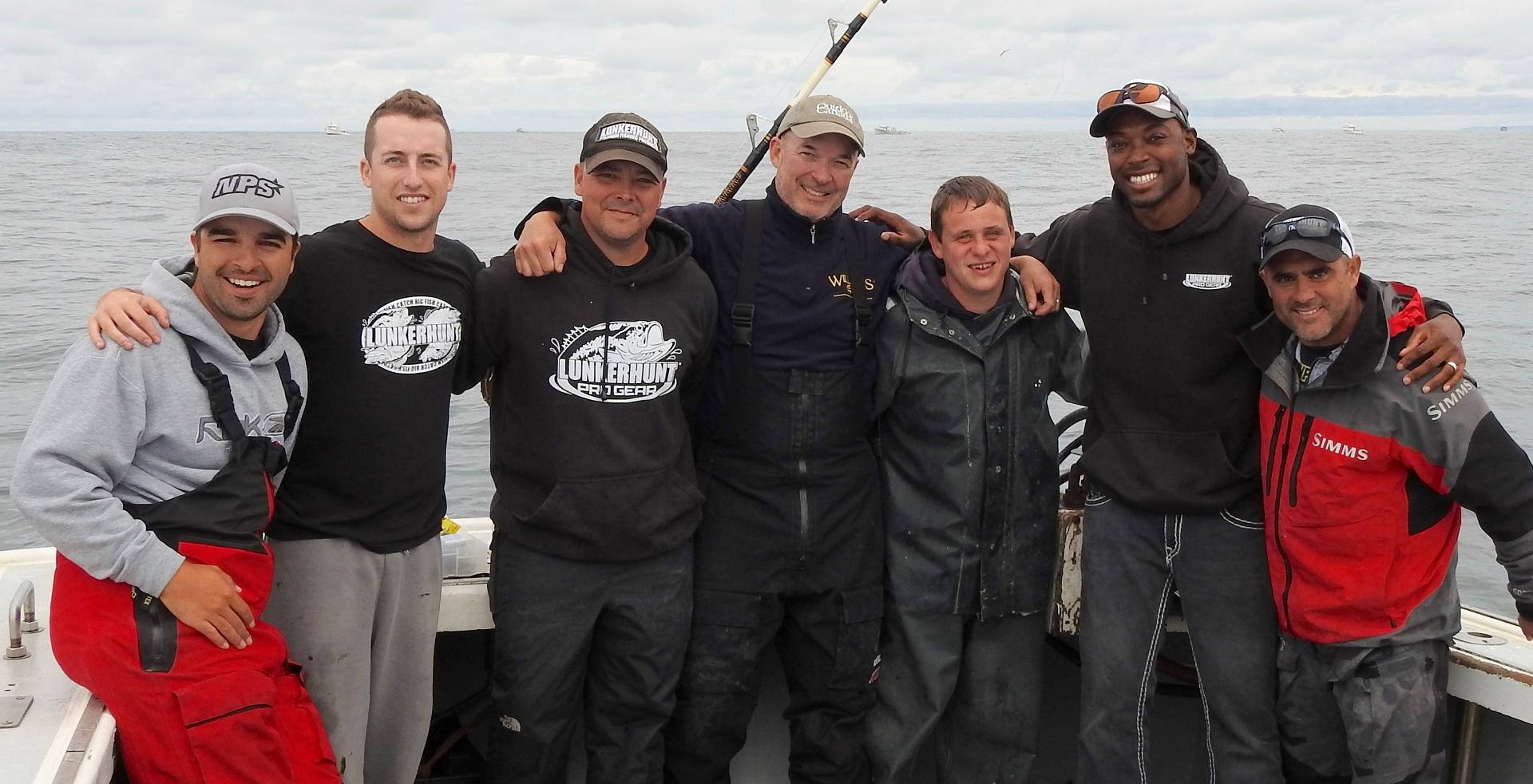 It felt as if all eyes were on us as we entered the Eastern Kings Community Centre in tiny Souris, P.E.I., and sauntered over to the tally board. In all, 26 bluefins had been caught-and-released during the Canada International Tuna Cup Challenge, and according to the tally board, all but one of the tournament’s 13 teams had landed at least one fish. The one unfortunate exception? Our six-man squad, Team Lunker Tuna Hunt. Sheepishly, we slumped into our seats as the awards banquet got underway, soon consoling our bruised angler pride with lobster and beer.

It’s not that we went into the competition thinking it would be a slam dunk for our team, mind you. After all, most of us were inland freshwater anglers, with zero experience aboard a tuna boat, in this case a 42-foot Provincial named Lucas Mitchell. Leading our crew was David MacDonald, the founder and owner of lure maker Lunkerhunt. Although originally from P.E.I., he actually grew up fishing in Ontario. Also hailing from Ontario were Lunkerhunt pro staffer Nuno Antunes, National Pro Staff co-owner Dan Miguel and yours truly.

Then there was the celebrity member of our squad, retired Dallas Cowboys safety Gerald Sensabaugh, perhaps best known from his eight-year NFL career for setting the record for the highest standing vertical jump (46 crazy inches, in case you were wondering). Now a pro angler in the Bassmaster Open Series, counting Lunkerhunt among his sponsors, Sensabaugh hails from Tennessee.

Rounding out the team was our one arguable ringer, MacDonald’s cousin, Chad Mooney, who grew up in seaside Souris and consequently knows his way around a fishing boat. That gave us some measure of confidence, as did our charter boat captain, Lucas Lesperance, whose personal-best tuna was a 1,164-pound behemoth that took six hours to reel in. And finally, serving as first mate was Lesperance’s father, Darrell, a 30-year-plus veteran of the high seas with a PB bluefin weighing a monstrous 1,297 pounds (also see “Our charter” at bottom of page).

So, how then did we end up with goose egg on our collective face? There’s no one reason, really, but rather a series of explanations. Let me run through our top 10 excuses.

Having the Lesperance father-son duo at the helm was certainly reassuring. Same with having Mooney on board, although he wasn’t able to join us until day two of the competition. But totally buoying our hopes for a podium finish was the outcome of day one of the competition: out of the entire field of 13 boats, only five fish were caught, measured and released. Plus, we had one fish on the line ourselves, but it slipped the circle hook after 20 minutes of us taking turns on the reel. With two days remaining, we were certain we’d get on the board or, at the very least, not be the only team to get skunked.

Did I mention all but one of the team members—Mooney—were freshwater anglers, living nowhere near an ocean, let alone bluefin tuna waters? On day one, for example, we all took turns on the reel fighting what we believed to be a second tuna. It turned out we were also strenuously reeling in a herring net the fish had crashed into. Then when the crew from another boat cut the fish free for us, we learned it wasn’t even a bluefin on the line: it was a big mako shark, pegged at 500 pounds. Who knew? Not us inland boys, that’s for sure.

Of the 13 teams, with anglers from Australia, Canada, New Zealand, Bahamas, Spain and the U.S., many had competed in the Tuna Cup before, along with captains and first mates who likewise were no strangers to the pressures of the tournament (see “Tuna tourney” at bottom of page). As for us, we were all new to the game—the Lesperances included.

Anyone need an ace mackerel jigger? Over the course of the three-day tournament, the team and I largely occupied ourselves by jigging for mackerel, the tuna bait of choice. It got to the point where we were sometimes more interested in staying on the mackerel balls than concentrating on finding tuna, although in retrospect, the two clearly go hand in hand. (Also see “#2 Inexperience.”)

These seabirds are complete arseholes. Yes, yes, I know, gannets only do what gannets do, which is dive bomb for fish. But man, were they annoying. I can’t tell you how many times the buggers stripped the chunks of mackerel from our rigs, diving down and grabbing it right off the hook as we tried to sink it down the 50 feet or so in the water column to where the tuna were marauding actual schools of mackerel. Several times, one of the birds would get hooked in the soft of the beak and we’d have to reel it in, restrain the wildly flapping wings and retrieve the rig. We even had a gannet double-header, with one bird hooked and another somehow fouled up under its wing. At one point, we resorted to decoy chumming to distract the gannets as we let down our baits, but that only seemed to attract more of them. Cormorants have nothing on these winged pests. (Watch the dive bombing gannets in action at www.outdoorcanada.ca/gannets.)

On the second day of the tournament, our overconfidence gave way to plain old bad luck when we lost two fish. One tuna somehow managed to steal the mackerel off the hook, while the other one ran under the boat and snapped the 180-pound-test leader. Let me repeat that: 180-pound-test. That’s how strong these fish are. Also, it should be noted, the Lesperances said they’d never ever seen a bluefin rip under the boat like that, saying the fish typically make a run for open water instead. Topping it all off on day two? Forty-kilometre northwest gusts, making for big swells and tricky traipsing across the deck. Then on the third and final day, we had to cut one of our lines after hooking into a giant seal. Bad luck, indeed.

Two words: beer and moonshine. Hey, was it our fault Maritime-brewed Schooner lager tastes like more, and that P.E.I. is home to Canada’s only legal moonshine distillery? Yes, you could say our rented home for the duration of the tournament did not resemble your typical tournament crew quarters, with the competitors diligently sharpening hooks, spooling on fresh line, poring over charts and getting a good night’s sleep. But I can tell you that Sensabaugh has one hell of an inventory of crazy tales and that the next time you’re in P.E.I., you should check out Rollo Bay’s Myriad View Artisan Distillery. I recommend the Strait Shine. Hic.

Maybe someone brought bananas aboard? Just saying. Polygraph tests have yet to be administered.

This has nothing to do with superstition and bananas on board, but I do wonder if our mammalian minds subconsciously or otherwise believe in a higher piscatorial power that can reward or punish us for our fishing prowess, etiquette and determination—or lack thereof. Whatever the case, the fishing gods had clearly decided to smite us.

Not to be confused with the two previous excuses, karma is of course all about what goes around, comes around. In this instance, let me explain. For the issue of Outdoor Canada currently in your hands, fishing editor Gord Pyzer had wanted to write about his own P.E.I. tuna adventure last summer with Captain Carl Gallant aboard Just Crackin’. I’d already committed to writing about competing in the Tuna Cup, however, so I told Pyzer that he’d unfortunately have to find another publication for his story. Well, guess what? He ended up catching three hefty bluefins on his trip (above), which was three more fish than our entire team could muster in three days. What’s worse, Gallant was the skipper for Ontario’s Team Huronia, which ultimately won our tournament. Yes, karma sucks. And so did we.

But man, did we have fun.

Staged out of the harbour in North Lake on P.E.I.’s northeast coast, the Canada International Tuna Cup Challenge debuted in 1972, and over the years the competition has attracted anglers from across Canada, as well as from Australia, Denmark, France, Germany, India, Italy, Japan, New Zealand, Norway, Russia, South Africa, South America, Spain, the United Kingdom, the U.S. Most of the teams use charters based out of North Lake, the self-proclaimed “Tuna Capital of the World.” The length of each caught fish is recorded during the three-day catch-and-release tournament, and the team with the longest combined total wins. Next year’s event is slated for September 7 to 10, with the coveted Tuna Cup once again up for grabs—along with bragging rights.

Lucas Lesperance and his father, Darrell, run their charter business, P.E.I. Sea Adventures, out of Naufrage Harbour, offering fishing, whale-watching and sightseeing tours aboard the Lucas Mitchell. Both men are lifelong fishermen, making their living off the sea. They launched P.E.I. Sea Adventures last year after Lucas, 21, earned his charter boat operator licence from the Marine Training Centre in Summerside. Fifty-five-year-old Darrell, who has fished for everything from bluefins to sharks over the years, is also an auxiliary member of the Coast Guard. This year in the Canada International Tuna Cup Challenge, Lucas skippered his crew to a fifth place finish out of the 15 competing teams, landing three fish in three days.