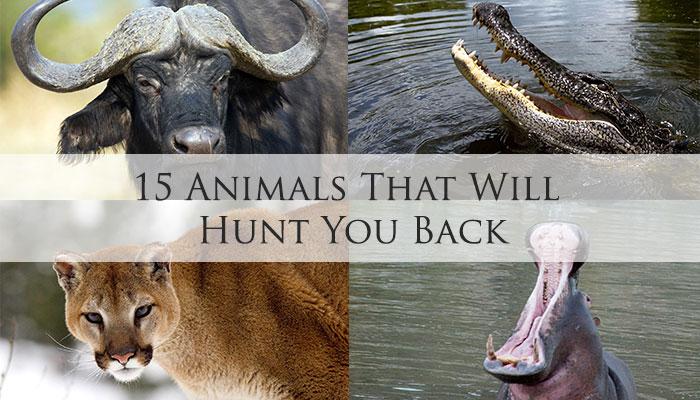 15 Animals That Will Hunt You Back

Although all big game animals can be dangerous when injured or cornered, the following list shows the top 15 most perilous animals to hunt – in Canada, and around the world.

Adult male polar bears can weigh up to 1,500 pounds and reach almost 10 feet in height, making them the largest predator on Earth. Given their massive size; a sense of smell that is second-to-none, being able to detect seals up to 1.6 kilometres away and under three feet of ice; and sprinting speeds up to 40 kilometres an hour, the polar bear is one of North America’s most dangerous animals to hunt. Although their typical prey is seal, polar bears will kill and eat pretty much anything they can stalk and catch – including people.

For hunting, the polar bear has a few tricks to rely on. When still-hunting, the bear uses its excellent sense of smell to locate a seal breathing hole and crouches nearby, waiting in silence, for a seal to appear. The bear may lay in wait for several hours. When the seal exhales, the bear smells its breath, reaches into the hole with a forepaw and drags it out onto the ice. The polar bear kills the seal by biting its head to crush its skull. The polar bear also hunts by stalking seals resting on the ice, getting in close and then rushing the last 30 or 40 feet for a surprise attack. With hunting methods such as these, and a coat that helps the bears blend seamlessly with the surrounding snow, hunters need to be acutely aware of their surroundings.