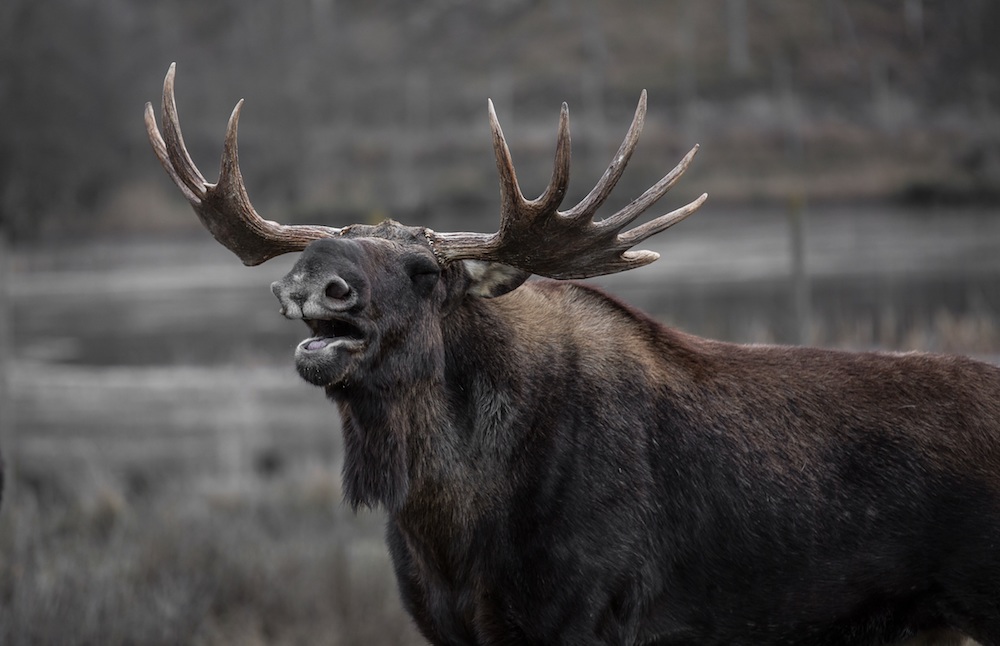 The prehistoric-sounding call echoed across the early morning mists of the boreal clearing, as the brightening sky created an eerie silhouette of the surrounding firs. Again came the wanton, lonely wail of the cow moose in heat, this time answered by a quieter, guttural gawunk from within the trees. A big bull. Then it was the whisper of evergreen needles on bone as the great beast pushed its way toward the cow, parting young conifers with large, palmate antlers. Standing nearly seven feet at the shoulder with a rack spanning a good five feet, the bull clearly dominated the scene as he entered the clearing. For these two moose, the annual rut was about to reach its logical conclusion.

From late September through to mid-October each fall, moose-mating season is truly one of the most impressive natural events to take place in our forests. It is at this time that the various rituals of the rut—from velvet shedding to the act itself—leave behind their telltale signs. And for hunters who understand what to look for and why, the advantage is theirs when it comes to finding that coveted bull.

Think of this as the official kickoff to the rut. By late August, a bull’s antlers become hardened bone, having completed their remarkable annual growth cycle. The velvet tissue that covered and nurtured the antlers as they grew has now dried tight to the rack and is no longer functional. It’s time for it to come off. Velvet shedding is usually quick, with even the biggest bulls stripping their racks within a day or two by rubbing and thrashing them on shrubs and evergreen saplings. Once the velvet is gone, the rut is poised to begin.

During the pre-rut period—after velvet shedding and before the cows go into heat—bulls roam their home ranges, thrashing or rubbing saplings and shrubbery along the way. At this point, the sound of their paddle-shaped antlers beating against vegetation is thought to signal the bull’s dominance to other males, as well as serve to attract females.

Similar to white-tailed deer urinating in their scrapes, moose deposit their personal scent onto their rubs as an invitation to females that happen to wander past. The smell of an appealing bull may cause a cow to stay in the area and start calling for his attention.

By using a shed antler, you can easily imitate a rut-charged bull moose that’s thrashing a sapling. This type of calling works best during the pre-rut period and during the early stages of the rut when bulls are searching for cows. Start by finding an opening or clearing that a bull has recently visited. Search for fresh tracks or, better yet, keep an eye out for wallow pits and fresh rubs on evergreen saplings (look for trees that are approximately six feet tall, with trunk diameters between one and three inches). A rubbed tree is easily identified: most of the branches will be broken off or bent down, and much of the bark will be gone from about four feet down to roughly a foot off the ground.

Once you’ve located some fresh sign, try rubbing a similar, or even the same, sapling with your antler shed. The sound should be irresistible to any bull within earshot that isn’t already preoccupied with a cow.

Similar to all other ungulates that shed and grow new antlers each year, male moose will spar with other bulls during the weeks leading up to the rut. This allows each bull to assess its own strength, stamina, antler size and, therefore, ranking of dominance with respect to the other bulls sharing his range. This familiarity with competing males serves to prevent life-threatening fights during the peak of the rut.

A bull moose will make obvious gestures to an opponent before a sparring match. He will sway his head from side to side, clearly displaying his massive antlers, while walking stiffly and slowly toward his opponent in an attempt to intimidate. This gesturing will continue for a minute or two, giving each bull ample time to determine whether he’s confident enough to match his strength and skill against his opponent’s.

To spar, two bulls will approach one another slowly and, with some care, place their antlers together. Once bone-on-bone contact is made, the shoving begins. One step at a time, each bull will push strategically with brute determination. After about a minute, they’ll lift their heads, pause and then continue—and so on—until one of the bulls turns away and ends the bout.

Again, sparring allows bulls to learn about their own physical abilities and limitations, and how to react to one another if they cross paths during the peak of the rut. If one bull was clearly the superior during the shoving match, the lesser bull will always back down if they have a confrontation over a female in the weeks ahead. If they were closely matched in their sparring bouts, however, neither animal will likely back down and an impressive fight will ensue.

Similar to the calling technique used to mimic rubbing or thrashing, it’s also possible to reproduce the sound of two feisty bulls sparring. By taking two antlers and pushing and rubbing them together, you can make it sound like two bulls are jousting for dominance. Don’t use your biggest sheds for this; two smaller ones will do just fine in creating the right sound, and they’ll be much easier to hold. Any nearby large bull that isn’t already busy with a female will likely come charging in to see what the other two males are fighting over—and enforce his own dominant status.

Tip: This is a good time of year to get out and scout for fresh moose sign in the areas you plan to hunt. The bulls will start to range more and begin to rub saplings and shrubbery, as well as dig wallow pits. Fresh sign means there’s a bull working the area, and if cows are present, he’ll likely stick around through the fall.

How to describe the image of two mature bulls fighting? Incredibly impressive raw power. With as much as 1,500 pounds of infuriated beast on either side, two combating bull moose make for one of the most awesome displays of strength in nature.

Most fights start with each bull stiffly gesturing to his opponent. With a threatening stare, ears laid back and the hair on his back standing on end, each bull will approach the other at a slow, quartering walk while tipping his antlers from side to side. This is an attempt to intimidate and scare off the other bull, all the while allowing enough time to size up his challenger.

If neither animal backs down and their antlers smash together, each bull becomes enraged in battle. Injury is common; sometimes antlers are broken and hides are cut open. In rare instances, the antlers can become locked, dooming both animals to starvation or the mercy of predators. Fights between breeding bulls are usually brief and intense, with the victor chasing the fleeing loser for a short distance.

Tip: Finding two mature bull moose fighting, or about to fight, is a rare occurrence; consider yourself lucky to witness this ancient test of dominance. What happens next depends on whether you’re holding a bull tag.

There are essentially four subspecies of moose in Canada, and the members of the largest group (northern Canada’s Alces gigas) behave quite differently from the other three subspecies during tending time. Namely, the cows in this group search out the bulls rather than the other way around. Blame it on the North’s relatively open terrain—and a significantly shorter fall season to accommodate breeding.

Bulls inhabiting this northernmost moose habitat grow larger, wider and whiter antlers than their somewhat smaller relatives to the south and east. Those with the widest (up to 77 inches), most reflective racks catch the eyes of the most cows at a greater distance. This allows most fit bulls to have a collective, or harem, of up to a dozen or so cows in close company, all vying for his attention. In fact, if more than one of those cows come into heat at the same time, they’ll stand on their hind legs and fight each other with their front hooves. The winner gets first dibs on the bull.

With all other moose in Canada, though, the bull will track through the woods—with his narrower, more manoeuvrable rack—and search out an individual cow in estrus. The pair will mate several times before the cow’s heat has finished and the bull heads off looking for another receptive female. (This pairing approach is the same with most other members of the deer family, except for elk, which have true harems.) During the couple of days that the cow is in heat, the tending bull will stay very close to her and chase off all other males. If an even bigger bull shows up, the tending bull will either head for the hills or remain and fight.

Hunting the tending time can be challenging. Calling isn’t likely to work with mature bulls, as they’re probably already with a cow in heat. And if you’re hunting in an area that may have other hunters, it’s not a good idea to stalk in after a call you heard-it just might be coming from one of those other hunters. In such cases your best bet is to set up your watch and start calling in a location with active moose sign. Any lone bulls in the area should come to investigate.

Moose lovin’. The experience of my first sighting of the act itself—a 1,500-pound bull mounting a cow just 20 yards in front of me—will stick with me for the rest of my days. And this when it was so shockingly brief. Unlike dogs or wolves, where a male can sometimes tie to a female for up to half an hour, with moose it’s up and down. There are no acrobatics or neck nibbling, but the job gets done.

If you have the rare opportunity to observe moose mating, sit back and be a silent spectator. Few people have seen such wonders in wild places.