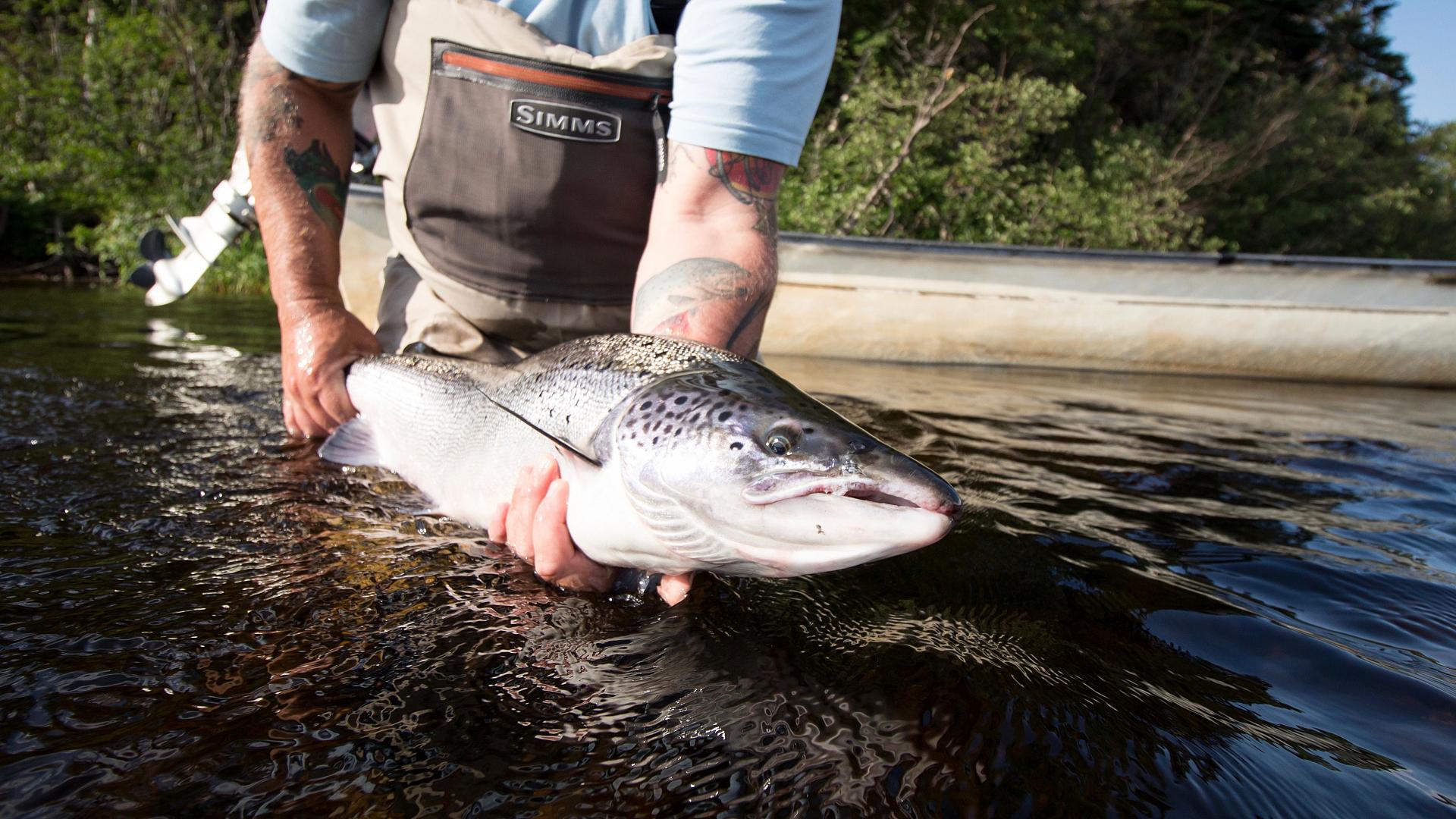 Summer of the Salmon

Boasting almost 200 Atlantic salmon rivers, some with annual runs of tens of thousands of fish, Canada’s 10th province is a prime destination for seekers of the silver swimmer. The 2015 season saw strong returns, and 2016 looks to be just as good—maybe even better. That means now’s an excellent time to plan a fly-fishing trip to Newfoundland and Labrador. But where do you start? Here’s an overview of the province’s top salmon rivers, complete with advice on tactics, timing and flies.

Regulations: Several special regulations apply to Newfoundland and Labrador’s salmon rivers. Chief among them, you can only use flies with a single barbless hook, and all non-residents must have a licensed guide. For management purposes, the province’s rivers are grouped into regions, with seasons ranging from June 1 to October 7. For complete information on zones, seasons and limits, go to www.outdoorcanada.ca/NLsalmonregs.

Stretching 246 kilometres, the Exploits is the longest river on the Rock. It’s also a good-news story. Fish passages built to bypass the river’s two largest dams, combined with a stocking program, have increased the annual return tenfold in recent years—20,000 to 40,000 fish now make their way up the Exploits. The lower section of the river below Bishop’s Falls can be fished from both the bank and a boat. My experience is with a major tributary, Great Rattling Brook, which joins the main stem between Grand Falls and Bishop’s Falls. Wading conditions vary, from an easy gravel bottom to more challenging ledges and large rocks. Along with the Gander and Humber Rivers, portions of the Exploits have a fall season, governed by special regulations between September 8 and October 7.

When To Go: Late June until the end of August; for Great Rattling Brook, the latter six weeks are best

Tip: Don’t be intimidated by the large size of the lower Exploits, as the salmon frequently travel upstream close to shore within casting range

The Grey is a major river on the south coast of Newfoundland flowing into the Cabot Strait. While it’s possible to fish near the mouth, the best angling is farther upriver. All rivers in the province are public, so the only way for an outfitter to offer somewhat private fishing is to take you to a tough-to-reach location. Grey River Lodge’s main camp is in just such an area, at the junction of two branches of the river that have good runs. How isolated is it? Access is by helicopter from Deer Lake Regional Airport.

When To Go: Mid-June to late July

Tip: Wherever ledges cross the river just beneath the surface, be sure to swing a wet fly as close to the upstream edge as possible; salmon frequently rest in these spots after negotiating the rough water below 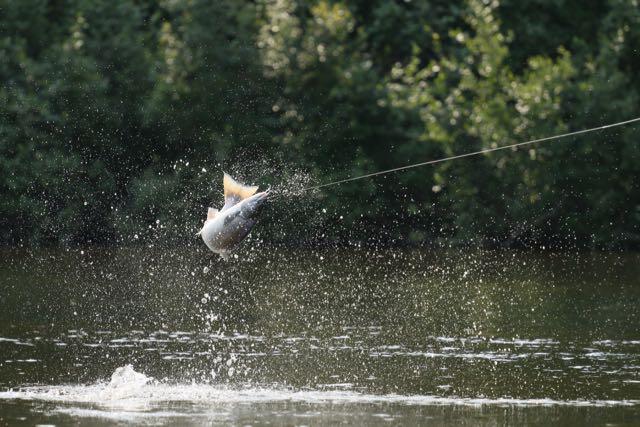 Flowing through the city of Corner Brook and into the Bay of Islands on Newfoundland’s west coast, the Humber is the province’s top big-fish river. Every season, salmon weighing 30 or more pounds are landed and released in the lower part of the river, particularly downstream of Deer Lake. While there are many wading opportunities, the best way to cover water is in a boat, which can be rented from several locations. The upper Humber also yields some heavyweights, but it’s best known for its grilse and small salmon. Big Falls is a popular area on the upper river, offering nearby camping and other accommodations. With scores of fish leaping the falls every hour, Big Falls is also the best salmon-watching spot I’ve ever encountered.

When To Go: From June to the end of the season; big-fish hunters favour the last six weeks

Tip: Load extra backing on your reel—I had a fresh 18-pounder take more than 100 metres off my reel on its first run

About a third of the way up the west coast of the Great Northern Peninsula, Portland Creek was the site of legendary angler Lee Wulff’s historic salmon lodge. It’s also the reputed origin of a salmon-fishing technique known as “the riffle” or “riffling hitch,” which involves tying one or two half-hitch knots in your leader, just behind the head of the fly, so the leader sits perpendicular to the hook shank. This makes the fly skim across the surface, combining the coverage of a wet-fly swing with the excitement of a surface strike. While Wulff recommended having the leader emerge from the side of the shank, my guides universally suggested having it emerge from underneath.

When To Go: July and August

Tip: Sharpen your technique for casting into an upstream wind

Located on the south coast of Labrador, the Pinware was once the only major Labrador river accessible by road—although it still took mainlanders two ferries and considerable driving to get there. The fishing is concentrated in two areas: the lower few kilometres where the pools are defined, and the gorge area, with its scores of small pockets. I put most of my time in on the lower stretch’s Tidal Pool. It’s best when fresh fish enter on a rising tide, then hold for varying periods depending on water conditions. It’s a large pool, so fishing from a boat or with a two-handed rod is ideal for covering more water.

When To Go: July is tops for numbers, but the largest fish—ranging from eight to 15 pounds—typically arrive during the last week of June and first week of July

Tip: Look for opportunities to cast a bucktail fly, such as a Mickey Finn, upstream, then strip it back quickly

Some eight major salmon rivers flow into the Labrador Sea on Labrador’s east coast, and the Flowers is the farthest north. Boasting a high catch-per-rod rate, the river sees fish averaging eight to 12 pounds. A few can push 30 pounds, however, particularly early in the run. Unlike on some other Labrador rivers, the bottom is wader friendly, making it ideal for inexperienced anglers and those who find rough bottoms challenging. Outstanding water clarity makes sight-fishing the rule rather than the exception. A light two-handed rod (12 to 14 feet long) can be useful on some pools, but spey casts should be restricted to touch-and-go tactics, such as the snap-T and snake roll, to avoid excessive surface disturbance.

When To Go: Mid-July and August

Tip: Ensure quiet presentations to visible salmon by using 10- to 12-foot leaders ending in 3X tippet, and smaller than average flies. Bring some size 10 and 12 patterns

Most of Newfoundland and Labrador’s salmon rivers are small to medium-sized, and can be fished with a six- to eight-weight single-hand fly outfit; reels should be large enough to hold at least 100 metres of backing. These days, more and more anglers are also using two-handed spey rods on several of the larger rivers, such as the Humber and lower Exploits. Virtually all fishing is near the surface, so floating lines are typical. Hook sizes 6 and 8 are the norm for flies. The recipes for most of the recommended patterns can be found in my book Modern Atlantic Salmon Flies (above), available from Gale’s End Press.

Long-time contributor Paul Marriner has been fly fishing for more than 50 years.