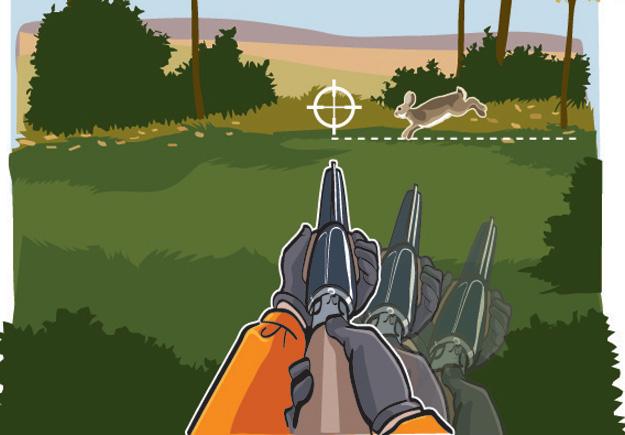 When I was a youngster and first allowed the thrill of carrying a gun, my quarry was the cottontail rabbit. So for me, the privilege and responsibility of handling a firearm are forever linked to rabbits. The thrill is still there, too. The only thing that’s changed is bunny hunting itself.

Time was, cottontails would burst out of weed clumps at my feet, then zigzag away for 30 metres and stop in a clearing, allowing me a shot with the .22. These days, sneaking around in the same type of cover rarely produces the bobbing tails of yesteryear, even though the ground may be plastered with tracks and peppered with droppings.

The rabbits are still around, but burgeoning coyote populations have made them warier than ever. Rabbits deal with the threat of coyotes by living in or near impenetrable cover, and getting into the thick of it fast when danger approaches. That makes a briar-busting beagle with leather chaps and safety glasses the ultimate bunny-hunting rig. If you’re hunting without a dog in coyote-infested cottontail country, however, your best bet is to stomp brush piles and fallen trees. But you have to do it just right to get results. Here’s how.

Don’t just give brush piles and fallen trees a couple of kicks and move on. No, you have to climb right up on top of them and start stomping-hard—because rabbits won’t leave their snug hideouts until they feel their whole world crashing down around them. You’ll need at least two hunters to do this: one to do the stomping and keep up the racket until the rabbit makes a run for it, and the other to do the shooting.

If you flush a cottontail and it runs straight away from you, swing the muzzle up and through it, touch the trigger the instant it disappears behind the muzzle and keep swinging.

If the rabbit runs past you at 90 degrees, on the other hand, swing the muzzle a rabbit’s length ahead of it, tap the trigger and keep swinging.

For a bunny quartering away from you, swing in front of its nose, touch off the shot and keep swinging. Whatever the case, the outcome’s the same: rabbit stew.

If you are the designated stomper, unload your shotgun and put it down before climbing up on the brush pile or fallen tree. Everyone must wear hunter orange so you can keep tabs on each other’s position. If you don’t know where someone is, don’t shoot.

When you approach a brush pile, walk around it first to find the exit holes. Before the stomper climbs up on the pile, post the shooter where he won’t be blocking the exits but has a good view of them. If there is a groundhog hole or any other type of underground getaway nearby, also try to block the route to it-that’s where long ears will most likely be headed when it streaks out of the brush.

If there are no obvious exit holes, rabbits will often take off through the side with the thickest ground cover, or closest to the next sheltering brush pile or weed patch. The hunter who’s planning to take the shot should stand back about 10 metres from the stomper and watch that side. With three hunters, you can cover all sides.

In the case of a fallen tree, escaping rabbits prefer to dash from the roots toward the narrow end of the trunk, because the branches protect their flanks while they get up speed to break into the open. The shooter should pick a spot that doesn’t block this exit route but still offers a clear shot.

If you know there’s a cottontail under a brush pile or tree, but no amount of stomping will scare it out, walk away for five minutes then return and stomp it again. Sometimes, a return visit will get a stubborn bunny moving.

If you’re physically unable to climb up on a rabbit hideout and stomp, carry a long, lightweight pole-such as an old bamboo fishing rod-and poke it into and around brush piles and blowdowns instead. Poke around thoroughly enough and fur is bound to come flying out.

A canine companion can be a big help when doing the cottontail stomp, especially if it gives tongue after tracking rabbit scent to a brush pile or blowdown. The dog may not be able to scare the rabbit out, but at least you know stomping the pile won’t be a wasted effort. Just be careful when you take your shot—sometimes Fido can’t resist giving chase to a streaking rabbit, and he could easily dash into your line of fire.

This game is all about close-range shooting at running targets. The firearm of choice should be a shotgun choked cylinder or improved cylinder to open up the pattern at ranges of 15 to 25 metres. I like #6 shot, as it patterns wider than heavier shot at close range but is still heavy enough to tumble cottontails. Leave the .22 at home—you won’t have any sitting targets.

When aiming, you’re naturally drawn to that bobbing white tail. Focus on it, however, and you’ll miss—every time. Instead, look ahead of the rabbit and swing the muzzle to the same spot. But expect to miss a few: cottontails rarely run straight enough to line them up perfectly. If you see your shot kick up dirt or snow behind a fleeing rabbit, swing farther in front next time before squeezing the trigger. And keep thinking about that rabbit stew.