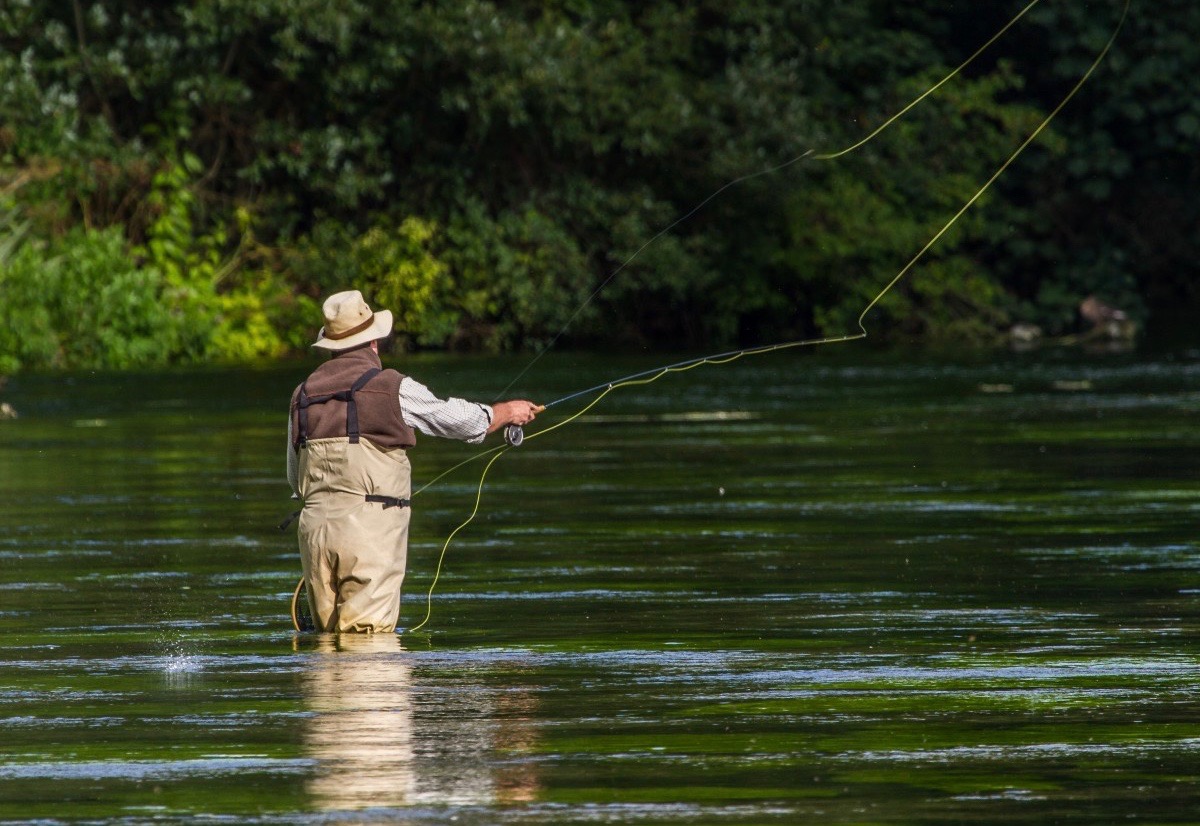 If You Fling Flies for More Than Trout, Get Tying These Top-producing Patterns

“I hope you will accept this book for what it is: my very best effort to help you find your way into the most productive of all fly-fishing methods for trout, and particularly larger trout.” So promised the late U.S. fly-fishing expert Charles E. Brooks in his book Nymph Fishing for Larger Trout. I guess you could say I’m not so trout-centric, as the list of species I pursue with nymphs is much longer-from panfish to Atlantic salmon, I’ve done well with nymphs. As for my personal favourites, let’s just say these nine offerings should definitely be in your fly box.

Ontario’s Mississippi River–once my home river–holds no trout, but plenty of solid smallies. During summer, the bass rise well to poppers and large dries, but in early September the cooling water puts them down. That’s when I would switch to large nymph patterns fished under a buoyant indicator. Particularly successful was the Big Black Stonefly Nymph, a simple pattern tied “in the round,” a style developed by expert tier Charles E. Brooks so that the fly has the same profile when viewed from the top, bottom or sides. Brooks recommends this nymph for trout in the heavy, broken water of larger rivers.

During a hatch, you can fish rough-water dries to bring trout to the top of pocket water. No hatch? Then present stonefly imitations near the bottom. These patterns must sink quickly-weighted, or fished with weight on the leader-then be felt with a tight leader. At times, observing hundreds of empty shucks on the rocks is all it takes to choose a stonefly imitation of the right size. My rule for colour, meanwhile, is simple: when in doubt, choose black. That said, the Black Stone’s design is also suitable for other colours, making it a great option. The following pattern is generic and adaptable to all but the smallest stonefly species.

Hackle: black hen, wound as a collar, then pulled up and down to lie on either side of the body

Tying Tip: Dub abdomen forward until reaching first wingcase position. Tie in feather section upside down. Fold feather over a bodkin to create folded wingcase. Tie down and dub forward to next wingcase position and repeat. Tie in and shape hackle.

Attributed to American angler Cliff Zug, the Zug Bug roughly imitates a variety of large, swimming mayfly nymphs. I’ve used it in rivers for years, either under an indicator or fished down-and-across. You’ll find it in my stillwater box, too: in lakes and ponds, the Zug Bug serves as one option when fishing overtop of subsurface weeds with an intermediate sink-tip line. Strangely, I don’t recall any outstanding catches on it, but every Zug in my fly box is thoroughly chewed up. Regardless, any story I might have would be upstaged by Terry Hellekson, author of Fish Flies: The Encyclopedia of the Fly Tier’s Art, who spent a hugely successful week in Kashmir fishing nothing but Zug Bugs.

Wing Pad: lemon-dyed mallard flank feather, the tip of which is cut square,

extending rearward from the eye along one-third of body

Spend any time fishing western rivers from drift boats and you’ll encounter the lowly San Juan Worm. Although not strictly speaking a nymph, when fished below an indicator as an in-line dropper above a stonefly or other nymph imitation, it has attracted more than its share of browns and rainbows for me. The first worms I ever saw were very large and tied on a radically curved-hook style known as English Bait Hooks. Worms tied on these hooks were poor performers, at least in my hands, so I recommend using the Talon C1130 (small) or Talon SA163C (large) if you want the curved look. This recipe is just one of many variations.

Body: red Brazilian velour or ultra chenille; use a lighter to singe each end

More than two decades ago, I spent a few years experimenting with a variety of original designs to represent caddis larvae and pupae. After testing them, most landed in my strip-for-hook drawer, but one that proved worthy of a place in my nymph box was the DB Caddis. Caddis pupae observed rising toward the surface often seem to be accompanied by a gas bubble, and the DB’s bright gold and glass beads imitate this. While occasionally fished under a foam indicator, the DB more often finds itself dangling beneath a large dry fly. It’s a relatively small pattern, though, so I leave it in the box if the water is deeper than three feet.

Heavy rains had swollen New Zealand’s Rangitaiki River and stirred up clouds of fine, sand-like particles. Fortunately, conditions improved considerably by the time I arrived at my beat for a session of the Commonwealth Fly Fishing Championship. Faced with a river-wide ledge two feet below the surface, I focused on a number of foot-deep grooves running along its length. While my controller didn’t collapse from exertion, she measured and released enough trout to place me near the top of the session. My weapon: a variation of the Hare and Copper nymph, given to me by a Kiwi friend.

As I manoeuvred my pontoon boat parallel to the shore of Nova Scotia’s Bruhms Lake one warm August evening, the smallmouth bass fishing suddenly became extraordinary-I stopped counting after I’d caught and released 30 fish. While the bass only averaged eight inches in length, the non-stop action made up for what the fish lacked in size. Triggering the feeding frenzy was a personal pattern, the One-Feather Damsel. My designs share several attributes, one being simplicity, and this one certainly fits in. I also often pick this pattern as part of a three-fly system for slow trolling a couple of stocked rainbow lakes in the same area.

Years ago, noted English author John Roberts introduced me to Hans van Klinken’s Leadhead Nymph while fishing England’s Wharf River. Van Klinken created the pattern to imitate a cased caddis, particularly for grayling fishing in northern Scandinavia. I tied up a batch as soon as I got home, and the next season the pattern worked its magic on the likes of browns in New York’s Beaverkill River and grayling in northern Saskatchewan. It’s been a go-to fly for me ever since, though I’ve altered the original pattern in two ways. First, I don’t use lead (see “Lead lesson” below). And if I’m likely to hook small fish (shorter than 10 inches), I use an in-line weight to reduce potentially fatal injuries to the fish.

Head: Crimp a splitshot onto a length of monofilament, or string on a metal bead; for in-line weight, crimp the shot to the shank, or thread on the bead

Body: spiky mottled dubbing (such as Hares Ear Plus)

After 25 years of fly fishing rivers and lakes without paying serious attention to midges, I was ill-prepared the first time I got a heavy dose of English reservoir trout fishing. Watching and learning from several experts swiftly adjusted my attitude. Today, I fish midges in all water depths, stationary or moving, on full-sinking, intermediate or floating lines, and with short or ultra-long leaders. I even fish them on their own, in pairs or three at once if permitted by local regulations. And I don’t restrict them to stillwaters, breaking out nymph or adult imitations whenever I can’t see what the trout are rising to. Of all the pupal patterns in my box, Epoxy Buzzers have proven the most effective-and black ones top the list.

Abdomen and Thorax: floss in larger sizes, or thread in the smallest sizes

Tying Tip: For thorax, add a small slip of orange tinsel or fluorescent floss on each side; for smallest sizes, I omit the orange. Coat abdomen and thorax with epoxy, superglue or-my favourite-Loon Hard Head.

For decades, nymphs were weighted with lead, typically in the form of wrapped wire. Having fallen into disrepute as environmentally unfriendly-and in some jurisdictions illegal to use-lead is now sometimes replaced with tungsten wire. More often, however, the substitute of choice is steel or tungsten beads or cones, which come in a range of colours.