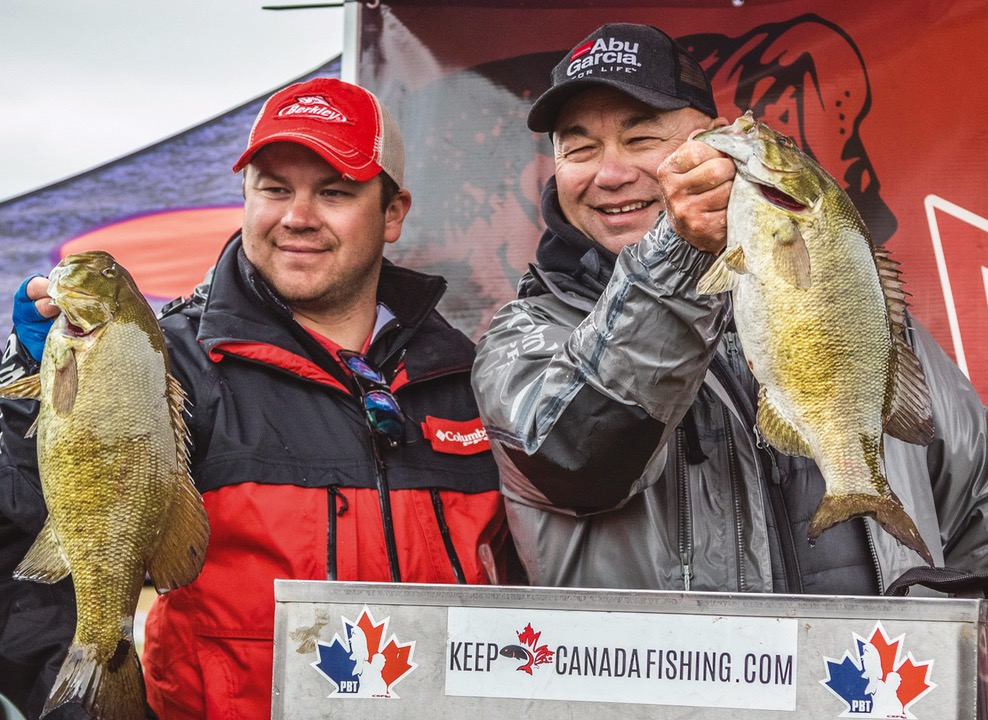 As O Canada plays over the PA system in a conference room at the Ramada Inn in Cornwall, Ontario, 16 of the country’s best bass anglers line up to get gold medals draped over their necks. They’re all members of Team Canada, which just eked out a win over Team U.S.A. at the 2019 Pan American Sportfishing Bass Championship. Team Mexico took the bronze medal, while a squad representing Akwesasne First Nations placed fourth.

The margin between first and second place was outrageously small—just 1/100th of an ounce—but Team U.S.A. is taking the loss in stride. Besides, while Canada came first overall, Team U.S.A. swept the pairs categories. Bass superstars Brian Latimer and Mark Daniels Jr. won gold, team captain Scott Martin and his father, fishing legend Roland Martin, won silver, while Jacob Wheeler and Dustin Connell took the bronze. After the medals are presented, Scott Martin picks up a glass of water, pours a drop on the floor, laughs and shouts to his teammates, “That’s how much we lost by!”

Teams from Puerto Rico and Costa Rica were also slated to compete in the October 17 and 18 tournament, but had to drop out due to logistical issues. Indeed, the road to get to this point hasn’t been easy, perhaps most so for the event organizers. Finding a location with good fishing and suitable accommodations and amenities close enough to an international airport was challenging, says Bob Izumi, Team Canada’s captain.

Along with fishing the tournament with his son, Darren, Izumi helped organize the event with the Canadian Sportfishing Industry Association and the Competitive Sport Fishing League. Organizers also had to arrange boats and drivers for the anglers coming from Mexico, as well as find scrutineers for every tournament boat.

Cornwall showed itself as one of the premier smallmouth fisheries in Canada, if not the world

Then, high winds and heavy rains forced the cancellation of the first day of the competition, which meant the anglers had to compete in two sessions on the second day, with separate morning and afternoon weigh-ins. As a result, everyone at the awards banquet is pretty wiped out. Still, the mood in the room is jubilant. “The fishing exceeded my expectations,” Izumi tells the crowd. “Cornwall showed itself as one of the premier smallmouth fisheries in Canada, if not the world.”

Judging by the results, Izumi is not exaggerating. The heaviest five-fish bag during the morning weigh-in was a whopping 25 pounds, caught by Team Mexico’s Ricardo Gonzalez and Arturo Saldana. In total, there were 26 two-angler teams, and seven of them weighed in more than 20-pound bags in both the morning and afternoon weigh-ins. The average weight for Team Canada was 38.98 pounds, while Team U.S.A.’s was 38.97.

Aside from the impressive weights, the Pan Am was also significant because it marked a milestone for the fledgling Canadian International Sportfishing Association (CISA), which is working with similar organizations in other countries to support future Pan Am championships and other international competitions. According to a press release following the event, “The ultimate goal of these organizations is to reinstate fishing competition at the Olympics.”