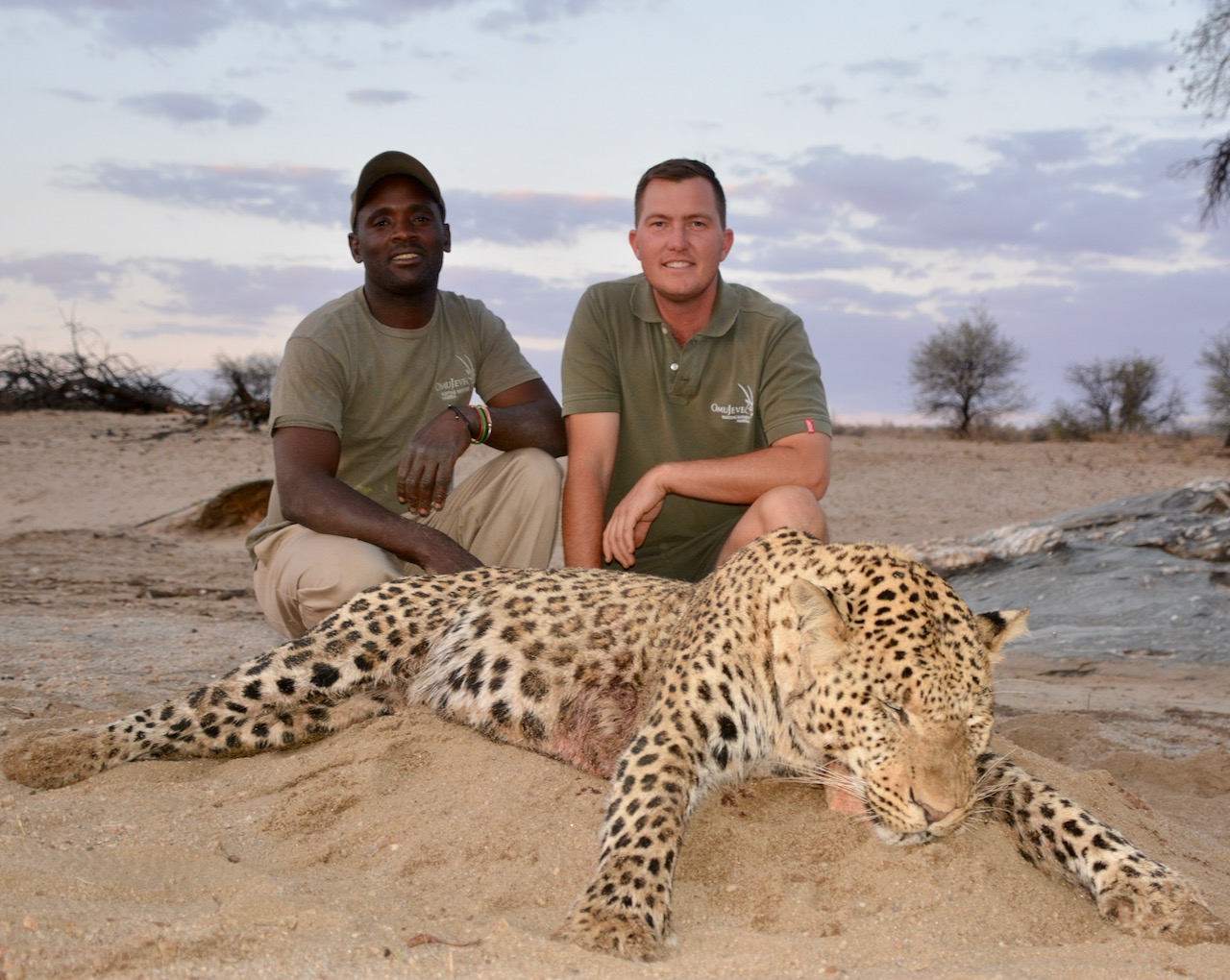 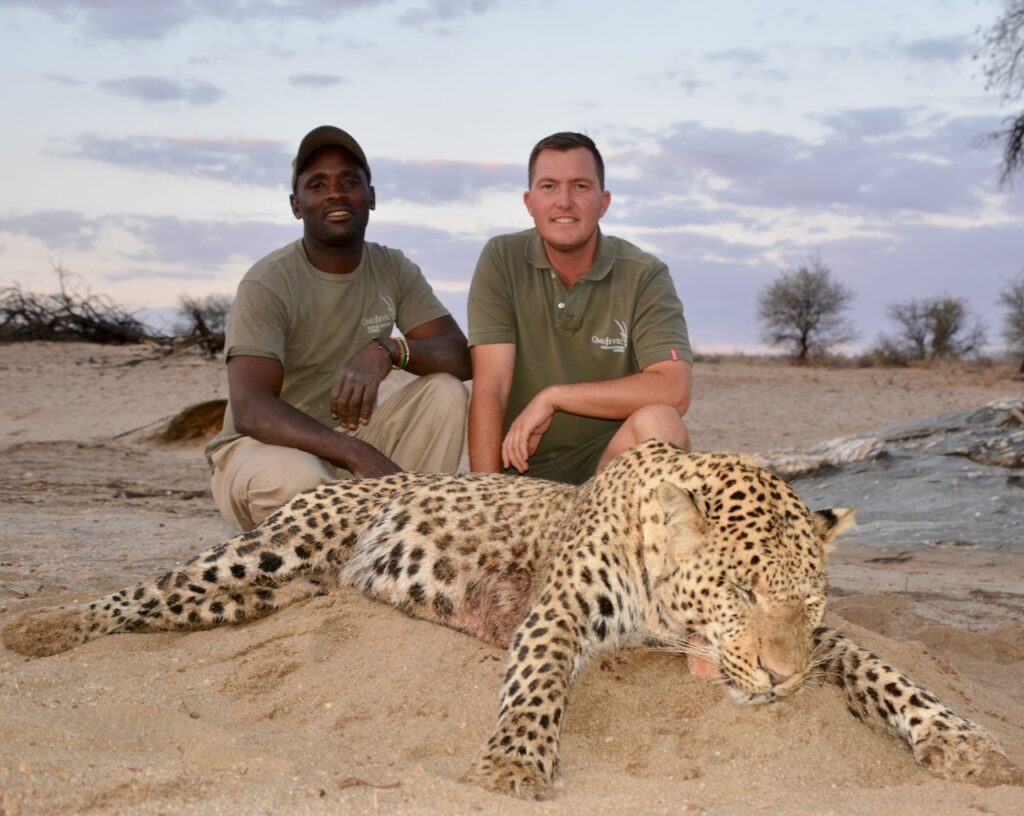 Ockert Bamm (right) and the tracker, Kabila, with the author’s leopard[/caption]

After that first excruciating night, we revised our set-up, building a lay-down-style blind in front of the existing hide. This proved to be much more comfortable as we could stretch out, and catching a few winks was measurably easier. The heat had abated somewhat, too. It was a downright cool 34°C, and what little breeze there was blew directly into the blind, offering a modicum of relief.

Unfortunately, that relief was accompanied by the odour of well-past-their-prime warthogs riding along on the wind—the smell could have gagged a vulture. It turned out to be another long night; we were in the blind for 14 hours, with no visitors other than two persistent honey badgers.

Always seeking positive change, Ockert removed the warthog carcasses the next day, leaving behind the relatively sweet-smelling zebra quarter as our only bait. Once again, we settled in early. We were prepared to remain until dawn, but hoped our tom would appear before dark. After enduring two sweltering, uncomfortable nights with almost no sleep, and with the hours passing like centuries, I was more than a little tired, so it wasn’t long before I nodded off.

The next thing I remember, Ockert was squeezing my leg and I was instantly awake. I’d been lying on my side and couldn’t see the bait, but I realized it was still legal shooting light. I lay stock-still, hoping for the double-squeeze indicating a tom was present and that it was time to get into shooting position. It seemed to take forever, but eventually the telling squeezes came, and I rolled as gently as possible into position behind the rifle.

Through the scope, I could see the leopard sitting like a dog, then standing on his hind legs with his back to me, feeding hungrily on the bait. Even from that perspective, I could see the broad shoulder muscles and thick neck indicating it was a tom, and a good one at that. I could also see and hear the bait swinging, with the big cat handling the 200 pounds of zebra flesh as though it were a hot dog.

I could see and hear the big cat handling 200 pounds of zebra flesh as though it were a hot dog.

“Are you comfortable taking the shot?” Ockert whispered. I shook my head in uncertainty—it wasn’t a shooting angle I was familiar with, and the last thing I wanted was a wounded leopard. After all, they’re nature’s perfect killing machine, the most effective and successful large predators on the planet. Make a mistake and they’ll take you apart faster than you can take off your socks. So, we waited and watched, praying for the light to hold just a little longer. Time seemed to stand still, and I’m not sure I was even breathing.

Eventually, the tom dropped down from the bait and turned to his left, broadside to us. “Shoot him now,” Ockert murmured.

I squeezed the trigger, and through the scope I watched as the big leopard instantly melted into the growing darkness. All went quiet, except for the sound of a nearby jackal yapping. Neither Ockert nor I said a word for a minute or so, then he asked, “How did the shot feel?”

To this day, I can still see the sight picture. I was just behind the shoulder, about one third of the way up the body. It wasn’t perfect—I should have been holding a touch higher—but it was pretty good. Of course, there was no telling if I’d pulled the shot at the trigger squeeze. A typical shot at a leopard ranks as one of the easiest you’ll take when hunting in Africa. It’s also the one you’re most likely to screw up; leopards do strange things to hunters.

Kabila pulled up in the truck a short time later and we drove to the bait. Using the headlights and a couple of flashlights to peer into the thorns, we saw no obvious indication the cat was down nearby. Rather than risk searching through the thick stuff in the dark, common sense told us to return at first light. The ride home was quiet, and I replayed the shot over and over in my head. Thinking about all that had transpired and worried I might have wounded the leopard, I had the longest night of my life. I slept very little, if at all.