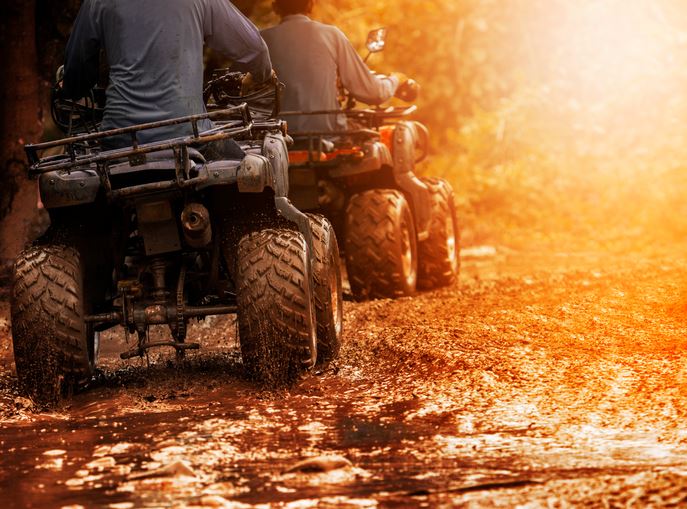 Our Favourite All-terrain Vehicles of 2010

As with fishing boats, it’s not surprising the worldwide economic shakeup has led to a slimmer lineup of new ATVs and side-by-sides for the year ahead. Yes, there are some new models on offer, but for the most part manufacturers have focused on tweaking and providing added value to their existing lineups. In either case, if you’re in the market for a new ride, there hasn’t been a better time to book a test drive than right now. Here are some of the new hunter- and angler-friendly models worth putting on your short list.

For pricing and more information on the boats featured here, as well as for other models, please contact the respective manufacturers.

Kiss last year’s TBX 650 goodbye and say hello to this more powerful 700 workhorse. The difference in the 2010 version of this classic Cat is the beefed up 695-bore power source delivering that extra edge you want from a rock-solid utility machine. The rear dump box comes standard-complete with fold-down gate-and able to tote 300 pounds of gear, while the front rack has room for another 100 pounds. Backcountry riders will like the selectable two- and four-wheel drive with front differential lock, which will get you through the tough spots. Available colour? Black.

Argo’s amphibious eight-wheeler needs little introduction, but this year’s model offers more than what meets the eye. Still standard is the Kohler Aegis 775 engine-a 748-bore electronic fuel-injected kicker that accounts for the machine’s output of 31 horsepower. What’s different is that the old and sometimes annoying skid-steer system has been replaced with an Admiral two-speed transmission that substantially smoothes out the ride. In high gear, power is split at a ratio of three to one to the outside and inside turning wheels, much like a standard steering system, to ensure gentler course corrections. Drop into low gear and the standard skid-steer system kicks in for Argo’s legendary manoeuvrability in tight corners.

Pushed off the top of the heap a few years back by the introduction of the Outlander 800, the 650 has languished in the shadows. This year it has roared back into the limelight with enough power to give its muscle-mate a run for the money. How so? Can-Am tweaked the Rotax V-twin, liquid-cooled, single-overhead-cam engine and then, borrowing a pair of Siemens VDO injectors from the world of high performance race cars, managed to squeeze out an additional seven per cent of performance. Add power steering that anticipates just the right amount of assist and you have one sweet riding machine.

You won’t have to hock the family sedan to pick up this latest two-up-capable economical quad from CFMOTO. The 600 EFI owes its 38-horse muscle to a four-valve, four-stroke, single-cylinder powerhouse fed by electronic fuel injection. Built at the company’s facilities in Hangzhou (about an hour and a half from Shanghai, China), the machine comes with double-disc front and single-disc back hydraulic braking, as well as 12-inch tubeless tires on cast alloy wheels.

Fed by eight six-volt storage cells, this fully electric side-by-side operates for just under two hours between charge-ups—a fuel-friendly option ideal for short trips. Set in an aluminum I-beam chassis featuring a 15-cubic-foot tilting box with a 500-pound carrying capacity, this machine can do much more than take you on a noiseless run to and from your secret fishing hole. And it will do it with the same manoeuvrability as its gas-operated twin, thanks to self-adjusting rack-and-pinion steering, a suspension designed to spoil you forever and safe, all-wheel mechanical drum brakes.

While the Volunteer 4×4 EFI looks like a snazzy, sleek side-by-side that’s high on style and comfort, it’s also built to haul you, your buddy and your gear in and out of the backwoods. This baby is a workhorse. Powered by a fuel-injected Kohler Aegis V-twin engine that generates 48 foot/pounds of torque, the Volunteer has good power response for hauling a mountain of gear or pulling a load. Then there’s the steel cargo box: measuring 53 by 42 inches and a foot high with a rating of half a ton, it will haul several days’ worth of firewood or the better part of a moose without even trying. It comes in yellow, dark green and, for a bit of extra cash, Mossy Oak Treestand camouflage.

Some quads just seem to have an enduring quality about them, like this one. It’s a solid, well-built machine providing power that’s both manageable for a range of riders and yet still more than adequate to handle any job. The addition of double-wishbone independent rear suspension allows for a smoother, more stable ride with negligible body roll. And the twin-clutch automatic shifter has the response and feel of a manual, which is rather nice. Add to that Honda’s electric power-assisted steering and you have a great ride whether you’re crawling or cruising. It comes in red, green and camouflage.

Thanks to a redesigned suspension that provides an additional 17 per cent travel, look for improved ride quality in this year’s TX. That means better traction, with all four wheels on the ground at all times, as well as a smoother ride. The shock coils are adjustable to accommodate any load, from the heaviest to none at all. Also check out the redesigned cargo box with a tailgate latch that can be opened with one hand—very convenient when you’re on your own. And you can remove the sides of the box for alternative access to the cargo. The improved lift handle and gas-assisted shock makes unloading almost effortless. Colour? JD green, of course.

With half a decade to ride on, Kawasaki’s flagship quad just keeps getting better and better. Take, for instance, the switch to Mikuni’s twin 36-millimetre throttle bodies coupled with a 32-bit engine control module to deliver dependable power under virtually any conditions. This is fuel injection at its finest, able to hold up on the roughest trails and in the worst weather. Another enhancement is the variable front differential control lever, which allows the rider to delegate the amount of power fed to the front wheels. It’s a feature favoured on the ranch and in the workplace, and a blessing in many of the situations anglers and hunters are apt to encounter.

To call the Mechron a work beast is an understatement. Power comes from a three-cylinder diesel engine generating 22 horsepower. Front limited slip and rear-end differential lock, coupled with four-wheel-drive, ensure traction in the muck and mire you’re bound to encounter on long backcountry trails. Then there’s the 56-inch-wide rear dump bed with a payload of 1,600 pounds. A rollover protection structure and seatbelts for driver and passenger come standard—just in case this side-by-side does go greasy-side up. The Mechron is slated to launch this spring.

Need room for three passengers? No problem with Kubota’s new 1140. You can run it as a traditional side-by-side with room for just one passenger, or you can convert the 18.3-cubic-foot rear cargo box into an 11.7- cubic foot box to make room for two more passengers on a backbench. According to Kubota, the changeover takes just 60 seconds, and the box is easily tilted up with an hydraulic lever. This machine is powered by Kubota’s own 24.8-horsepower diesel engine feeding a triple-range hydrostatic transmission. And yes, there’s rollover protection over both the front and back seats. Look for the 1140 in orange and RealTree camouflage.

By looks alone, it would be tough to tell this side-by-side from the standard Polaris 400-until it gets going. Silently. Powered by a bank of eight 12-volt storage batteries hidden away under the seat, the EV boasts a range of up to 80 kilometres, and a top speed of 40 clicks an hour. Refueling? Just plug it in while you get your much needed eight hours of shut-eye and you’re both good to go. Polaris set this hummer into its mid-size 400 chassis, recalibrated the suspension and braking to accommodate 650 pounds of batteries, then turned it loose. The EV offers all the amenities of its gas-powered twin, including a cargo box. It comes in deep blue and, for a few bucks more, Mossy Oak Break-Up camo.

The new five-speed, semi-auto four-by-four is just what Suzuki needed in its stable of 376cc King Quads. The key component is a state-of-the-art fuel-injection system providing reliable cold starts, as well as smooth power output in the mid to high range. The standard feature setting this ATV apart from other mid-range offerings is the assisted operating ranges, allowing the rider to select the speed, as well as reverse, neutral, high and low-all clutch free. Power is provided by a four-stroke, four-valve engine bathed in Suzuki’s proprietary oil-and-air cooling system. Unique to the 400FSi, the limited slip differential ensures maximum traction by sensing the torque when in four-wheel drive. With its large-diameter steel front bumper and rugged 50-inch chassis, this rig is designed for the backcountry angler and hunter alike.

Notice something different about the top-of-the-hill Grizzly this year? You bet. It’s the windscreen that comes standard on the LE models. While this sporty version falls short of the protection offered by a full-size screen, it nevertheless provides some relief from the rain and cold. And the quick-detach system allows the fairing to be removed in seconds by unscrewing two bolts. Aside from the windscreen, this limited edition Grizzly again offers the electronic power steering introduced last year, as well as a V-belt Ultramatic transmission—all adding up to a big-bore machine that’s a pleasure to ride, even on a long run.