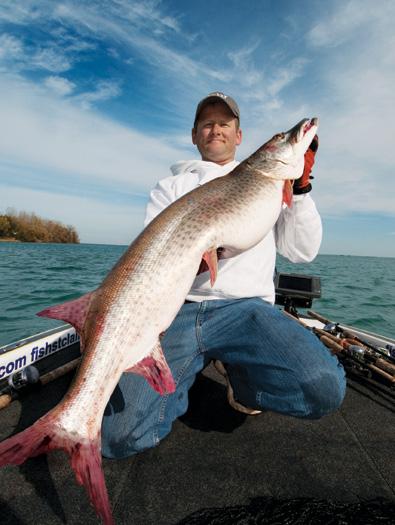 No other freshwater fish is as notoriously tough to catch as the legendary muskellunge—there’s good reason anglers call it the fish of 10,000 casts, after all. So, how is it possible that tackle maker Jon Bondy, outdoor photographer Brandon Broderick and I managed to catch 15 muskies in 15 hours over two days last fall? And these were big fish, too, including four Incredible Hulks in the 40-pound-plus fish-of-a-lifetime category. Even most of the “smaller” fish tipped the scales at more than 30 pounds. The reason for our success had as much to do with the incredible waters we were fishing as it did our secret weapon: Jon Bondy’s very own Bondy Bait, and the unique presentation he’s developed to go along with it.

So, where were we fishing? On southern Ontario’s Lake St. Clair, as well as the Detroit River in Windsor, where there appears to be more big fish per acre of water than anywhere else on the planet. I can say that with some authority, since I live along the shore of northwestern Ontario’s Lake of the Woods, which many anglers believe to be the centre of the muskie universe. To be certain, the fishing is good on “The Woods,” but 15 mammoth muskies in 15 hours of fishing? Not a chance. And that’s not even counting the fish we hooked and missed, including a behemoth that slammed Broderick’s bait, headed across the river to Motown and almost pulled him into the river. I’m not exaggerating.

We were rigged up with eight-foot, extra-heavy-action muskie sticks and baitcasting reels spooled with tough 80-pound-test Spiderwire braid. We also tied on 200-pound-test stainless steel leaders fashioned from downrigger cable and tightened the star drags on our level-winds as much as humanly possible. To get them any tighter would have required vise grips. Even still, Broderick’s behemoth somehow managed to strip out line. It’s a good thing it did, too, or else Broderick, who was hanging on for dear life and starting to panic, would have been left with two equally untenable options—either loosen his grip on the rod and lose it or hang on and get pulled overboard. (He caught the fish, by the way.)

Such a strong bite offers proof that muskies are first and foremost a riverine species, functioning best in big waters with swiftly flowing current. It also shows that southwestern Ontario’s Essex County—lying at practically the same latitude as northern California—offers the perfect blend of environmental conditions for optimal muskie growth.

Factor in a steadily warming climate and tons of food, especially large gizzard shad, and it’s a magical brew for muskies and muskie hunters alike. Consider: Our sonar screen repeatedly misread the tops of the gigantic balls of bait for the bottom of the lake. I had no idea this quality of muskie fishing existed anywhere on earth. Nor have I seen a more brilliant way to catch muskies than with Bondy’s self-named lures and presentation.

“No one else was making a lure I could hang over the side of the boat and fish vertically as I drifted down with the current in the Detroit River,” says Bondy, explaining why he decided 10 years ago to develop his signature series of soft-plastic Bondy Baits.

Depending on wind direction and speed, the river’s current is usually running between eight and 11 kilometres an hour. That’s fast, so Bondy moulded his big soft-plastic bait around seven ounces of lead to get it down quickly with the line remaining vertical. For lake fishing, it’s also the perfect weight for casting long distances, making a big splash, sinking quickly and retrieving in the necessary lift, fall, lift manner.

“It is heavy,” he concedes, “but when you fish it with the right gear, it doesn’t wear you out.” Indeed, when I fished with Bondy last year, we started each morning casting the giant baits in Lake St. Clair, where there’s a noticeable current even out in the main lake. Working with the current, Bondy’s strategy was to stop along a specific breakline or bottom contour, turn the nose of the boat into the wind—regardless of the direction from which it was blowing—then use the bow-mounted electric trolling motor to keep us drifting over the depth he wanted to strain, which was generally 15 to 20 feet.

After completing a carefully controlled two-kilometre drift, Bondy would pull up the electric trolling motor and we’d scoot back to our original starting spot before drifting back down, only this time over a slightly deeper or shallower swath of water. At the speed we were moving, we were able to systematically cover a good chunk of territory efficiently and effectively.

For targeting muskies, this system will work all season long in any lake, river or reservoir in the country. And if there’s no current, you can drift with the wind, or use your electric trolling motor or kicker outboard to pull you along. In fact, anglers doing just that have also made the technique the hottest tactic for trophy lake trout to sweep the North these days (see “Laker connection” below).

The key to casting a Bondy Bait is to make long, high lobs so that when the lure hits the water, it makes a big splash. Bondy says he’s convinced the noise of the bait hitting the water catches the attention of any nearby muskies, putting them on high alert. “As a general rule, when you’re fishing for most other species you want to be as quiet and stealthy as possible,” he says. “But muskies are a different breed. They’re the top predator and don’t fear much, so when they hear the bait hit the surface, they think it is a dead, dying or struggling fish. It raises their curiosity and attracts them.”

Having hopefully caught the attention of a muskie with the noisy splashdown, Bondy lets his lure plummet to the bottom or to the specific depth in the water column he wants to target. But it’s not an undisciplined, out-of-control free fall. Instead, he keeps tension on the line, following the bait’s descent, always anticipating a strike.

Once the lure is down, he points his rod tip parallel to the water and swims it back to the boat, alternating between raising and lowering his rod. I was actually surprised to see how gracefully he does this. It’s not a fast, violent or erratic recovery, as you might think, but rather a steady, rhythmic retrieve, with the Colorado blade at the back of the bait flashing, vibrating and making noise.

Here’s another important presentation detail: Once Bondy has retrieved the lure all the way back to the boat, he doesn’t quickly reel it up and make another cast. Instead, he keeps it dangling, lifting it up with his rod tip a half-dozen times from the eight o’clock position to about 11 o’clock, before letting it fall back down. At the apex of each lift, as well as at the bottom of each fall, he pauses for a second or two. Again, none of these manoeuvres is quick or erratic. It almost looks as though Bondy is conducting an orchestra, controlling the performance with his rod rather than a baton.

And he never lifts his rod tip beyond the 11 o’clock position. “That’s when you’re going to feel at least half of the muskies hit,” Bondy says. “If you continue raising your rod tip to the 12 o’clock position, which is the natural tendency, you’re going to be out of position when a fish hits—you’ll have no leverage left to set the hook.”

Setting the hook isn’t a problem, however, when a muskie slams the lure as it falls back down. I discovered this when we moved into the main channel of the Detroit River and were being quickly swept downstream. Bondy had us positioned perfectly alongside a huge steel breakwall, with the bow of the boat pointed into the wind so we would drift down the face of it. Had I stretched out, I could easily have touched the structure with the tip of my rod.

Following Bondy’s instructions, I positioned my left hand under the thickest part of the rod, immediately in front of the reel, with my right hand wrapped around the trigger grip. As we drifted along the man-made cover, I was methodically raising the bait, pausing, lowering it and pausing again. And that’s when it happened.

“Holy Hannah!” I shouted as a muskie slammed the Bondy Bait. Leaning into the fish, I watched as the water exploded boatside. The reality show Swamp Country, where good ol’ Louisiana boys with missing teeth snag alligators, was like Sesame Street compared to this. It was slam, bam, thank you ma’am and the muskie was in the net.

And that’s the way it went for two days with no significant lulls in the action. It was one marvellous muskie after another, topped off by Broderick’s 51½-inch, 42-pound monster. And get this: that giant was the last of three muskies he had hooked and landed in just 45 minutes, each fish establishing a new personal best.

Jon Bondy has been guiding anglers on Lake St. Clair and the Detroit River for 18 years, specializing in walleye, bass and, of course, muskies. Book a trip or learn more about Bondy Baits.

Over the past five years, jig-trolling the Bondy Bait has become the hottest trophy lake trout technique across the North. That’s partly due to one angler—Mark Macauley. After muskie fishing several times on Lake St. Clair with Jon Bondy, the bait’s inventor, Macauley stuffed a single pearl Bondy Bait into his pack before heading to northern Saskatchewan’s Lake Athabasca to fish for lake trout. During his lunch break one day, he dropped the lure over the side of the boat and within seconds whacked a 29-pound laker. The rest, as they say, is history.

“I only had one lure, and I drove my partner crazy,” says Macauley. “Every time we started to troll, by the time he had let out his line and engaged the spool, I was already battling another lake trout.” On subsequent trips north, jig-trolling the Bondy Bait has accounted for more than half of Macauley’s lakers.

“I like to troll at 1.8 to 2.2 miles per hour and bounce the bait up and down, just like the way we fish it for muskies,” Macauley says. “If it starts to rise too far above the bottom, I just let out a little more line.”

His biggest laker so far on a Bondy? A 37-pound goliath.

Imagine flying into Windsor, Ontario—there are numerous daily flights with Air Canada and WestJet—staying at a plush riverfront hotel and enjoying fine cuisine at day’s end. This is my kind of muskie fishing, and it gives a whole new meaning to the expression “roughing it in velvet.” To help plan your own trip, contact Tourism Windsor Essex Pelee Island.