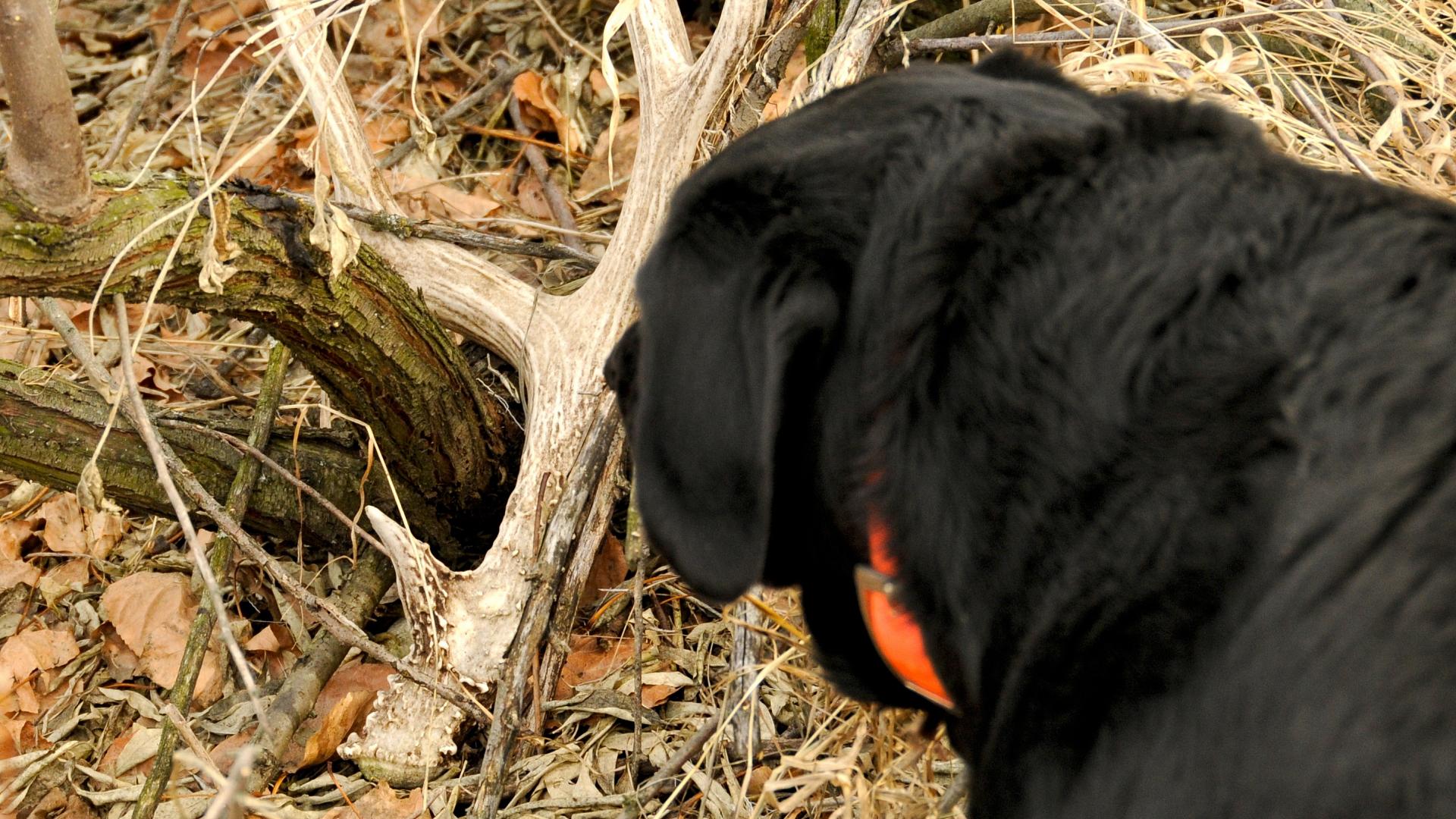 4 Tips to Transform Your Dog Into a Shed Hunter

Searching for antler sheds can make your dog a better hunter

My dog is hunting the edge of a wooded meadow, his tail wagging as he homes in on the fallen prey. After finding the trophy and picking it up in soft jaws, he races back to my side and drops it. No, it’s not a long-tailed pheasant or a glistening greenhead, but rather a beautiful five-point white-tailed deer antler—exactly what I’ve trained my dog to find and retrieve.

Welcome to one of the fastest-growing dog sports in North America, and a great way to keep your four-legged friend keen on hunting during the off-season. Any dog with a retrieving instinct can be taught to hunt for antler sheds practically anywhere there are deer, including suburban parks.

Worried that training your dog to find sheds will dampen its drive for hunting birds? Don’t be. Searching for antlers only exercises your dog’s senses of sight and smell, enhancing its natural hunting instincts. Besides, cold hard bone is no competition for a warm, flapping bird. Here’s what it takes to turn your best friend into a bone collector.

You don’t need much in terms of gear to train a dog to hunt for sheds. Essential are three or more actual shed antlers. You’ll also need commercial antler scent and a solution for removing human scent from the antlers (a store-bought formula or a homemade recipe of ¼ cup baking soda dissolved in four cups of hydrogen peroxide). And to keep your scent off the antlers once they’re prepared, wear rubber gloves. You may also want to use dog-training equipment such as a collar, lead or whistle, to reinforce basic obedience.

As with training to retrieve any object, start by getting your dog interested in antler sheds. To do this, tease the dog with an actual shed, encouraging it to try to grab it. Jumping, running and chasing arouses the hunting instinct in our canine companions, and after a few short sessions, your dog will be begging to play this new game of trying to get the antler.

Once your dog is excited about antlers, it’s time to increase the distance at which it can visually identify them. Place some antlers in low, mowed grass and start with short retrieves, increasing the distance each time the dog is successful in finding them.

To find sheds that are not in plain sight, a dog needs to associate antlers with their scent, which is concentrated around the knobby base. Spray or wipe the antlers with artificial antler scent, making sure to first get rid of any human scent using the scent removal solution. The idea is to have the dog find the antler based on its scent, not the familiar smell of its handler’s hands.

As your dog’s confidence increases, challenge it by placing the antlers in heavier and heavier cover. This forces the dog to start using its nose more. In the final phase of the training, hide the antlers in thick cover so that they’re completely out of sight and the dog can only find them by scent. This was my dog’s final test before I took him on his first official shed hunt.

Finding antlers in the wild requires some initial scouting on your part. Deer tend to congregate in the winter, and it’s during this time (between December and March) that they shed their antlers. Bigger bucks lose their antlers first, due in part to the stress of the breeding season. So, the places where deer hang out in the winter are the first places you should check in the spring. Deer don’t travel very far and these hot spots have the potential of yielding dozens of sheds—and with any luck, a few matched sets. Also check deer paths that cross fences, as well as old farmyards, bale stacks and creek beds.

All dogs get sidetracked in the field by the scent of deer hair and bones, old gut piles, scat, bedding areas and so on. I turn these distractions into learning experiences, correcting my dog with commands such as “no” or “leave it,” which tell him that’s not what we’re looking for.

I always like my dog to be successful, as it keeps his enthusiasm high. I ensure this by carrying a small antler with me when we’re shed hunting. If it looks as if we’re going to be skunked for the day, I toss the antler out for him to find. Young dogs may take a little longer to become proficient shed hunters, but if your dog is a seasoned bird hunter, like mine, you may be able to get it to switch gears in a just few days—and bring home the hard-earned rewards.