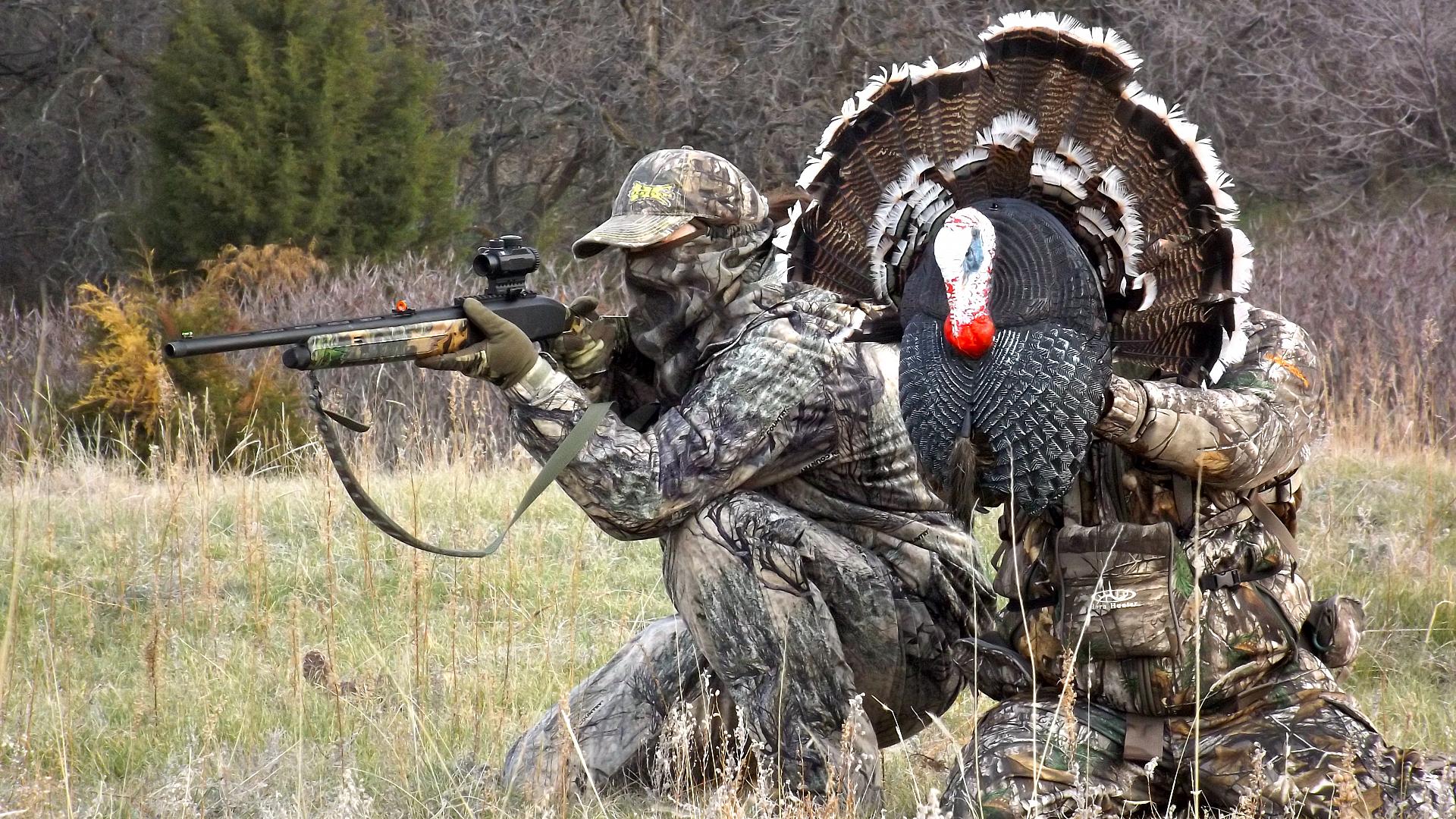 Can’t Lure In That Spring Gobbler with Hen Calls and Decoys? Turn On the Fan!

Hunting in a remote valley, my wife, Stef, and I watched a pair of gobblers slip into the hardwoods and disappear. For the last hour of daylight, however, they rattled their heads off from the same location, letting us know exactly where they’d gone to roost—and where to set up the following morning.

On the previous two days, we had tried to call and decoy birds, but they stuck with their hens and wouldn’t have anything to do with us. It was time to change things up and challenge the gobblers instead. So the following morning, we set up along the treeline and waited for the birds to fly down from their roost.

Once they were down, we stayed out of sight until the two toms finally disappeared over a ridge with a hen trailing behind them. We then ran up to the crest and dropped to our bellies, creeping forward until we could see over the top. The birds were already more than 100 metres away and still moving.

The one thing you can count on with wild turkeys is their incredible eyesight, so when I held up a turkey tail fan, the two strutters immediately locked onto it. If you know anything about toms, you’ll understand how territorial they are and how aggressive they can be toward each other. The pecking order must be followed or a fight will ensue to decide who the boss is. And that’s exactly what we were hoping to achieve by holding up the fan.

At first, the two toms gobbled, but when I kept moving the fan back and forth to mimic a gobbler trying to entice the hens, it was more than they could stand. They didn’t know whether to strut or run, and after a few failed attempts to gain ground in full display, they came at us on a dead run. The pair disappeared for a second at the bottom of the hill, giving us time to get our guns in the shooting position.

Seconds later, I could see the two heads again, bobbing back and forth as they ran toward the fan. When they were less than 10 metres out, Stef’s 20-gauge barked beside me and the payload pounded the bird on the right to the ground (above). The second tom ran to the left a few steps, but still hadn’t figured out the game, allowing me to put a bead on his head and connect for the daily double.

Having the birds charge us and shoot them at such close range was an exciting rush we’ll never forget. It was also my initiation into the art of fanning for gobblers, and I was instantly, well, a fan. 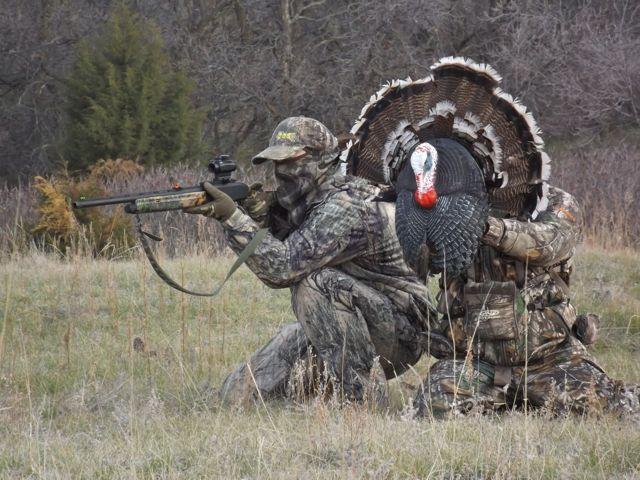 I’ve been accused of unsafe hunting when I use a fan to attract turkeys. However, the fan can only be seen from the front, and other hunters looking at the set-up from any other perspective will see you long before they see the fan. As for someone approaching from the front, the turkeys you’re working are bound to be spooked, putting an end to things anyway.

That said, only use a fan when you’re hunting on private land, preferably with no other hunting parties present. But if fellow hunters are on the property, make sure they know where you’re setting up and that you’ll be using a fan. Also, only use this technique in open terrain, where other hunters can clearly see you.

The traditional method for bringing gobblers to the hunter is to set out hen decoys and make hen calls, but many believe this is the opposite of how male turkeys actually behave—namely, that toms expect the hens to go to them, attracted by their loud, reverberating gobbles. Indeed, it’s common to see hens heading toward a gobbler after leaving the roost.

When toms do come to a hen call, it’s usually because they don’t already have a mate or they’re looking to steal some action. I’ve had more than one hen ruin my hunt, however, by coming in and stealing a working gobbler away from me. With fanning, you avoid the whole male–female mating dynamic and instead put the odds in your favour by working on the tom’s territorial nature.

You can fan any time you see a male turkey displaying, as he’ll perceive the action as a challenge to his dominance. Fanning also works on turkeys out for a stroll, or when they’re feeding. Jakes are susceptible to fanning, as well. They’ll often gang up on mature gobblers, so when they see your fan, they’ll come running like a group of thugs, thinking there’s someone new to torment.

Turkeys fan with their tail feathers much the same way a bull moose displays his antlers, turning them in multiple directions to ensure any challenger in the area sees them. Gobblers have a distinct pecking order, so when a stranger shows up, there’s going to be a fight. Being bold enough to display a turkey fan in an area where the birds already know where they stand with each other is like waving a red flag at a bull.

When fanning, it’s best to work birds in teams. The person operating the fan remains low and out of sight while the shooter stays ready, often to the side or in cover on the flank where there is a clear, safe shot opportunity. The person operating the fan then tries to draw birds into the shooter’s lane. A good and safe way to get a clean shot is to position the shooter 10 metres down the treeline from the person with the fan. That way, the tom will be fixated on the fan and strut unwittingly past the shooter.

You can fan while hunting solo, but it does take a little more finesse. And to avoid scrambling at the end and getting busted, you need to have your shotgun at the ready from the outset to shoot over, around or under the fan. I strongly recommend practising close-up shots, as a territorial gobbler can quickly come charging in, just metres off your barrel.

Whether fanning alone or with a partner, I first like to get as close to the birds as possible without bumping them. That said, I’ve fanned in birds from as far away as 800 metres. If you see turkeys in the distance, throw up a fan and crawl out of cover so they can see it.

One of my favourite fanning experiences took place when my hunting partner and I once spotted a lone gobbler strutting along the edge of an alfalfa field and some thick cover beside a river. Once the bird disappeared into the cover, we snuck to the edge of the field, roughly 300 metres from where we saw him. With a fan held high in front of us, we made a few hen yelps. At that, the old gobbler came back into the field and started strutting.

We watched the bird for several minutes, but he didn’t seem interested in crossing the field to check us out. So we edged farther into the alfalfa, and it was more than he could stand. The old boy strutted and popped as he worked his way across the field, and with about 80 metres to go, he lost his patience, folded up his tail and came running in. At 30 metres, he stopped and raised his head as if he knew something was wrong, but it was too late—a load of Federal 3rd Degree anchored him where he stood.

Did I mention I’m a fan of fanning?

Nothing beats real feathers (above) when it comes to fanning to trick toms. The next time you harvest a gobbler, cut off the tail section—including the shiny, colourful rump feathers—making sure to keep the bottom end of the spine attached. Scrape out any fleshy parts with a knife, then treat the skin with Borax to dry and preserve it. The best way to do this is to open up the fan and pin the feathers down onto a piece of cardboard so they remain spread out; once the tail is dry, it will last for years. Alternatively, you could opt for a store-bought fan. Here are two popular models.

Chicken on a Stick

This jake decoy comes with an artificial tail that can be fanned open. The long stake serves as a handle when you’re working the decoy as a fan, or you can use it to anchor the decoy when hunting solo. The stake even has a gun rest, enabling you to shoot from the prone position while looking out from under the decoy. On my Chicken on a Stick, I replaced the artificial tail with a real one (pictured), and it works outstandingly to bring long beards in close. Learn more at www.primos.com.

You can remain completely hidden behind this large, umbrella-like decoy, allowing you to sneak up on birds while mimicking an intruder. There’s one hole in the top to keep watch through, and another to slide your shotgun barrel through. The decoy is easy to move back and forth to make it look like the real thing, and it opens and closes like an umbrella for easy transport and storage.

Alberta contributor Brad Fenson has been hunting wild turkeys for more than 18 years.