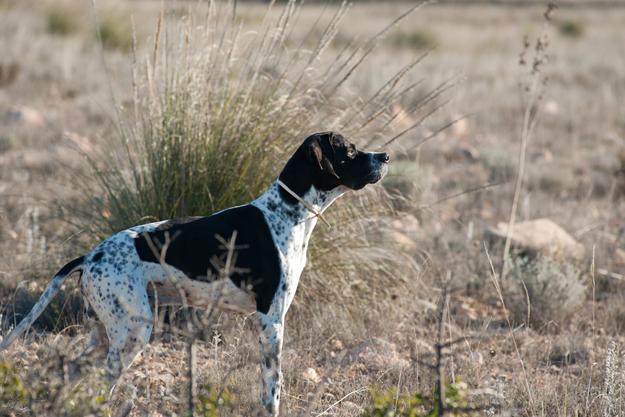 Dog Sense: 4 Ways to Keep Your Pointer Safe This Season

A pointing dog has a dangerous job—it works near the intersection of a deadly swarm of pellets and an unpredictable target. Here’s how to avoid being the guy who shoots his own dog.

Never walk in to flush a bird with the gun mounted to your shoulder. Instead, hold the gun in both hands with the muzzle pointed at the sky so that any accidental discharge won’t hit the dog.

Sometimes you’ll see the pointed bird on the ground before it flushes, but don’t shoot until it flushes high enough that there’s sky behind it. So much can go wrong when shooting at walking or low-flying birds. If the bird runs, the dog could run also to relocate it and run into you shot. If the bird flies low to the ground, the dog could leap up for it and into your shot. Or, pellets can hit branches and ricochet toward the dog on point.

Instead of walking up behind a dog on point, circle wide and come at it from the front or side. That way, the shotgun blast won’t damage the dog’s hearing when the bird flushes. And since the bird won’t run toward the dog, it will hold better if you circle wide around the pointer.

Keep your two-legged hunting buddies safe, too. Never shoot from behind another hunter, or across in front. When two hunters are walking in on a point, the hunter on the left side shoots birds going to the left, while the hunter on the right shoots any birds on his side. As for birds that flush straight away, take turns.