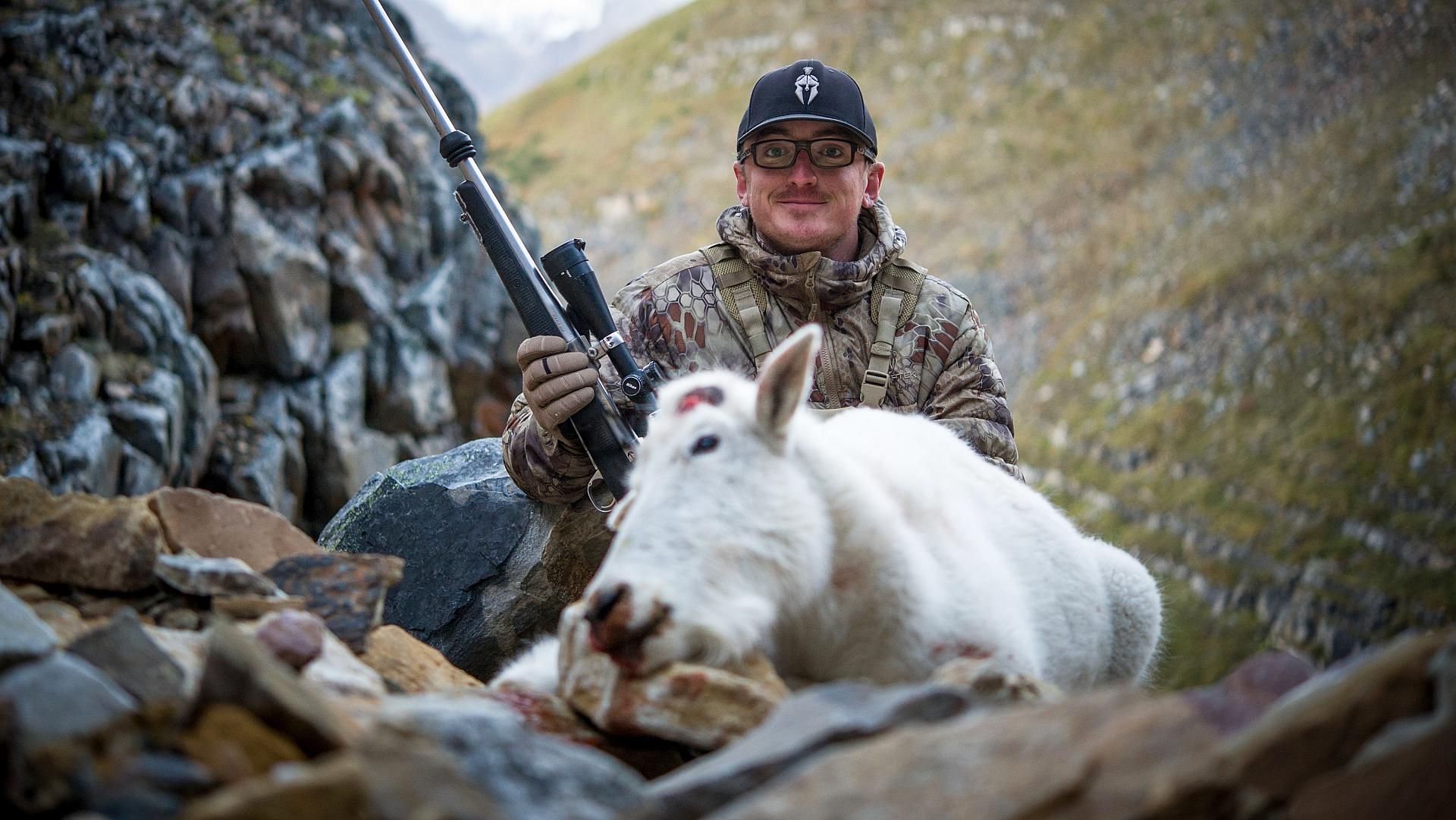 Everything went wrong on this hunt in northern B.C.’s Rockies—and it was awesome

Terrible weather, a busted trophy and a treacherous descent. For this hunter, it was all part of the adventure

My hunting partner Mike Beckman was leading the way when he suddenly looked back at me and pointed excitedly to the other side of the valley. A thousand metres away, there it was—a mature mountain goat. There were only a few hours of daylight left, and the terrain was too gnarly to close the distance in time for a shot with my bow. We had a decision to make. Mike, who was rifle hunting, was not comfortable making shots past 300 metres, and the closest we’d be able to get before dark would be roughly 700 metres. Luckily, he was packing my long-range rifle, which I’d been practising with religiously. I was more than confident I could make the shot with a solid rest, so I handed Mike my bow and took the rifle. Decision made.

We closed the distance as best as we could, and I found a large boulder to serve as my rest. Being quite a bit lower than the goat, I used my angle-compensating rangefinder to give me a precise, horizontal distance. Although the goat was close to 750 metres away as far as the bullet would actually travel, I dialed the turret on my scope to 470 metres and turned up the magnification to 20x. Having all the time I needed to wait for the perfect broadside shot, I stayed glued to my scope and stabilized my breathing. I also scanned the area to ensure my precious trophy wouldn’t fall off a cliff after it went down.

Finally, the goat appeared from behind some brush and turned broadside. As my .338 echoed through the valley, I watched as the goat dropped on the spot, my 200-grain bullet shattering both shoulders. Then, as Mike and I helplessly looked on, the animal rolled down the grassy slope and somehow managed to plummet off the only nearby cliff. It was hard to watch, as I knew the outcome would not be pretty.

With our stomachs in knots and night falling, we set out to recover the animal. Once we found it, though, I had one of those moments when you start questioning yourself. The horns had smashed off in the fall, and we were in the middle of a steep cliff shute. It was dangerous, and I honestly had no idea how we were going to get out of there, let alone get the goat out. Either way, nothing was going to happen that night and we were going to be sleeping on the side of the cliff.

It was day 12 of our two-week self-guided hunt in the high country of northern B.C.’s Northern Rocky Mountains Provincial Park, and bad luck was clearly destined to be part of the adventure.

It’s not that our trip didn’t start out on a positive note. Have you ever embarked on one of those hunts you’ve always dreamed about, but never thought it would actually come together? Me too. The only difference is, I had the chance to make it a reality last fall. It would be a mixed-bag-style hunt, as both Mike and I had a pocketful of tags. We were sure it would be nothing short of amazing. Then, the bad luck began.

As we drove north from my home in Prince George to our jumping off point in Muncho Lake, the weather forecast became more horrendous with each passing hour along the 1,000-kilometre route. In the end, the forecasters were calling for 14 days straight of rain and fog in the area we’d be hunting. Normally, this wouldn’t have bothered Mike or me, except for one thing—with no visibility, the float plane wouldn’t be able to take us to the secret remote lake where we planned to begin our hunt.

Finally, after wasting three days of our hunt waiting at Muncho Lake’s Northern Rockies Lodge for the weather to break, we were finally able to fly out—it was really happening and the plane ride only added to the excitement. You know those scenes from hunting shows on television, when they fly over landscapes teeming with moose, caribou, sheep, goats and elk? Never in my wildest dreams did I think the area we were headed into would be that rich with game. But it was.

Sure enough, after hastily unloading the plane at the lake and jumping behind our optics, the surreal dream continued. Within the first 10 minutes of officially being on the hunt, we spotted dozens of goats, several elk—including a few nice bulls—and a couple of bears. It was quite late in the day, however, and since we were unfamiliar with the area, we opted to stay put and head into the alpine the next morning. Our good luck had returned. Or so we thought.

The next morning, the same poor weather we’d waited out back at Muncho Lake had caught up with us. But what’s a little rain, right? Well, this was not your usual rainstorm—we were so socked in, we couldn’t even tell we were in the mountains. Visibility was next to zero, so there was no point in going blind into the alpine. The last thing we wanted to do was bump an animal out of the area.

After deliberating over our morning coffee, we decided to stay put in the low country. It wasn’t as though we were throwing in the towel—it was the early stages of the elk rut and we could likely have a chance at a productive hunt until the weather broke. Plus, if we did have an encounter, it would likely be up close, which would be ideal because I was bowhunting.

After a few days of hunting the low country, learning the area and praying for the rain to end, we stumbled upon a large natural mineral deposit in the timber. It was covered in sheep, goat, caribou, moose, deer and elk tracks, as was the surrounding area. Jackpot!

So, what did we do? It was a no-brainer, really. We hunted the timber during the day and set up over the mineral lick in the late afternoon and evening. The first night made us confident in our plan when a large bull elk stepped out into one of our shooting lanes. If we’d been hunting back home, there’s no question we would have had backstraps over the campfire that night. It’s a little different on a fly-in hunt, though, when you have to worry about weight restrictions and extra costs. You really do have to think twice about squeezing the trigger. Sure, the bull was a mature 6×6, but for the cost of flying him out, he just wasn’t big enough to take the shot.

And so we continued to hunt the mineral lick, waiting for the weather to break. For 10 days, we rarely even saw the mountains, let alone get a wide enough window to venture into the alpine. And all during that time, we never saw an animal worth taking.

When we woke up on day 12, it was better than Christmas morning. The rainy weather had finally ended, the skies were blue and it was time to hit the alpine. It was almost as if the energy of our first day of the hunt had been restored, and we were all smiles as we scrambled to load up and start gaining elevation. Knowing we only had two and a half days left in the hunt, we decided to travel light and fast, bringing only our clothing, stove, food and hunting gear. After all, how bad could a night under the stars be while dressed in our layered clothes?

The bush was thick and there were no trails as we climbed, drenched in sweat. It was not in the least bit enjoyable, but it was all worth it once we broke free of the treeline and could see for kilometres around us. Not wanting to bump any animals, we let the optics do the walking. Stone’s sheep, elk and goats were all frolicking in the basin, but there was nothing we were interested in shooting.

After an hour, we continued hiking farther up the mountain drainage, and that’s when Mike spotted my goat and we ended up spending the night on the side of a cliff. It was a long, miserable night in sub-zero temperatures, and we had to heat our water bottles on the stove to help keep us warm. But at least we had an early start to the morning, taking pictures of my goat then quartering it to pack out.

As I figured, navigating our way off the cliff while carrying a 100-pound-plus pack was nothing short of sketchy. On at least four occasions, I honestly thought that if my foot slipped, I’d be dead. It was more nerve-racking than any hunt I’d ever experienced, but we had no choice. So, onward we pushed, eventually making it out safely.

It was a wonderful feeling to arrive back at our lakeshore camp and finally set down my heavy pack. The hunt was essentially over, as the plane was arriving the next morning to pick us up. Thinking back to those hunting shows, I was thankful that our hunt was 10 times more of an adventure than anything I’d ever seen on television. Horrendous weather, almost getting hypothermia while sleeping on the side of a cliff and navigating rocky chutes that were only meant for mountain animals? I wouldn’t have wanted it any other way.

Keen to hunt B.C.’s high country, but not on your own? Contact the Guide Outfitters Association Of B.C. at www.goabc.org.