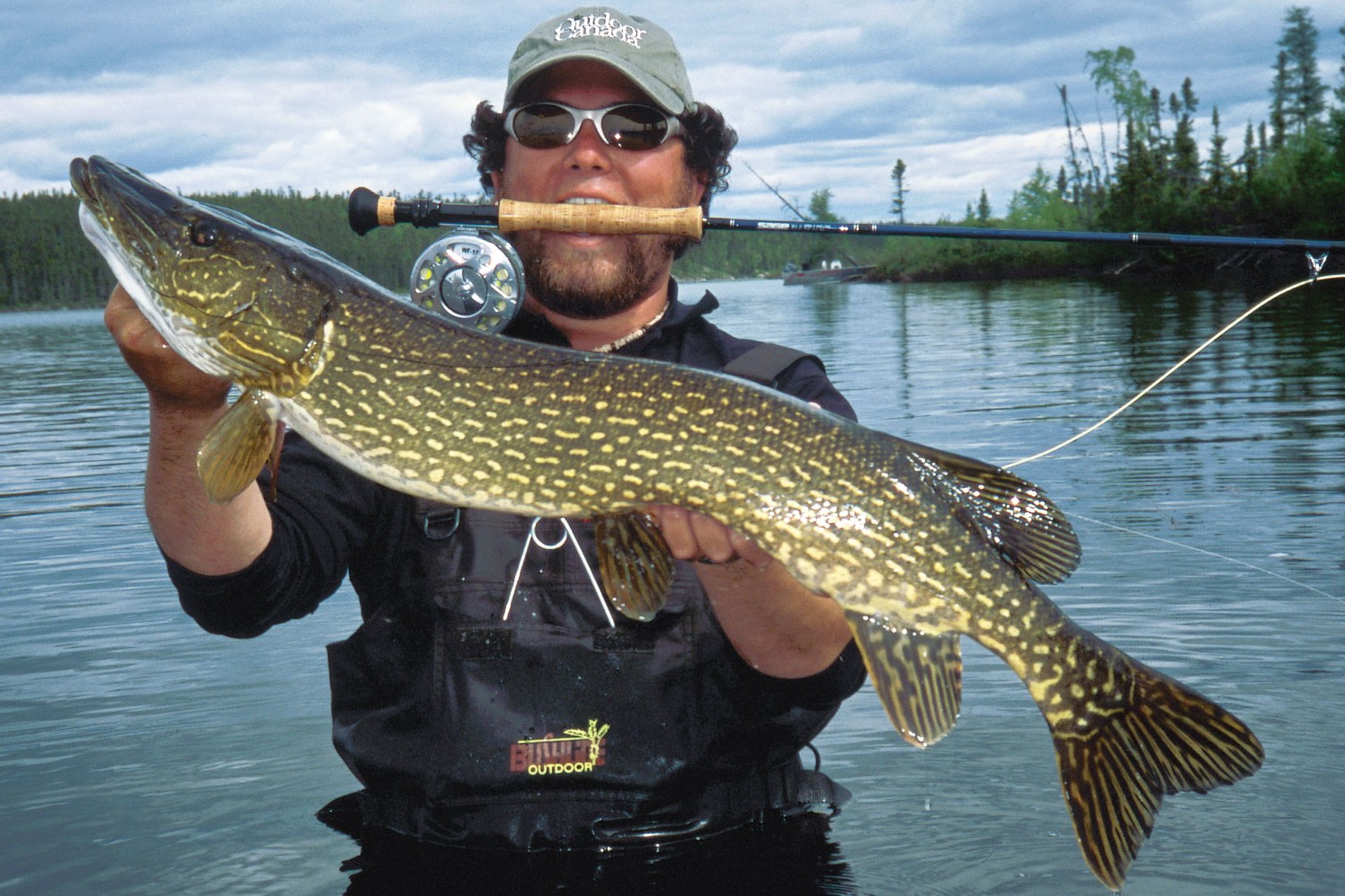 How to Fish Shallow-water Pike

Tips on finding and catching monster northerns in skinny water

In the shallow water of the Canadian Shield’s larger lakes, giant pike-mature fish three feet long or more-cruise through the scraggly weeds on the prowl for careless baitfish, ducklings or leopard frogs. Against the off-white sand of these long, shallow bays, the pike stand out like logs. Get too close to these logs, though, and they’ll scoot away in a swirl of sand.

For all their ferocity, pike can be remarkably skittish. But if you place an offering just right and work it enticingly through the water, the fish will either totally ignore your presentation or slowly turn to take a better look, then follow it for some distance before deciding to either take or reject it.

And when the pike do decide to take the bait on a clear day in clear water, you can watch the action unfold before you. That’s what makes skinny-water pike so special. Much like sight-fishing for bonefish or tarpon, the rush of shallow-water fishing for big northerns is addictive. Here’s how to get your fix.

Pike lurk in lakes from Labrador to the shadows of the Rocky Mountains, but not all pike waters offer the perfect combination of conditions for skinny-water fishing. Smaller Shield lakes, for example, only have small areas of shallow water at their inlets, and perhaps outlets.

The Shield’s larger lakes and reservoirs, on the other hand, are more likely to have shallow, sandy bays the size of one or more city blocks. These larger bays provide more area to stalk pike, making it easier to position the boat for the perfect cast without spooking the fish.

And because of the greater volume of water, large lakes tend to be clearer, making it easier to spot the fish. Specifically, look for three- to six-foot-deep flats with clean sandy bottoms, rather than flats covered with dark detritus, against which pike are almost impossible to see.

Fishing pressure, meanwhile, has a telling impact on the number of trophy-class pike in a particular lake. As a general rule, the less accessible the area, the greater the chances of finding fish more than 35 inches long. In some cases, that might mean travelling a considerable distance across the water to reach a remote bay, or driving badly rutted logging roads to fish a lake that others have struck off their lists.

Remote doesn’t necessarily mean inaccessible, however. Some waters may simply be beyond the range of most anglers, as is the case with several excellent road-accessible lakes in the Yukon. Fly-in waters, as a rule, offer good skinny-water pike fishing simply because they’re subjected to relatively light fishing pressure.

In northern climes, the first half of the summer fishing season usually provides the best sight-fishing for pike. That’s because the aquatic vegetation is only just starting to emerge and visibility is still good. Same goes for the spring in more southerly waters, where the fall also offers good sight-fishing as the water cools and the weeds die off.

Shallow-water fishing can still be productive in northern waters even after the bays are choked with weeds during the latter half of the summer. Heavy weed growth can, however, make it difficult to sight-fish. Instead, you can run your fly or lure along the weedbed perimeter to trigger a strike from a fish lying in ambush.

Whether the weedbeds are just starting to emerge or they’re in their full glory, the most productive days are typically sunny with a light breeze to ripple the water. Under these conditions, the pike aren’t as readily spooked by the boat or the angler’s movements. A light breeze also makes it easier to control the boat.

“The main thing is to drift your boat in without running a motor,” says Rocky Marcinkiw, who has been fishing skinny-water pike on Saskatchewan lakes for the better part of 20 years, including a decade-long stint guiding at Wollaston Lake Lodge, which he now manages. “I don’t want too much of a breeze because you drift in too fast.”

On windless days, meanwhile, poling the boat makes it possible to cover bays with minimal disturbance, but be prepared to make longer casts. It’s a trade-off, really, since the fish are easier to spot but more skittish. Conversely, if the breeze is too heavy, the pike are less likely to be spooked, but the boat will be pushed too quickly across the shallows for an effective presentation. A small anchor can solve that problem.

Even if the water is too rippled or too dark, or it’s too overcast to see the pike, you can still fish the shallows. Instead of sight-fishing, though, it’s just a matter of casting blind to likely areas.

In all skinny-water situations, the choice of lure has more to do with depth and action than colour and material. Northern pike are highly evolved predators, subsisting on other creatures. They’ll devour anything that acts, looks, moves or feels like prey, from dragonfly nymphs, frogs and fish to ducklings, muskrats and snakes. And they’ll just as readily chomp down on fakes fashioned from plastic, wood, metal, fur or feather, provided the offering has action. Lay a metallic wobbler on the sandy bottom of some sun-warmed bay and it will be ignored by every passing pike. But run it past the nose of a lurking northern and chances are you’ll at least get a follow.

Shallow-water pike fishing precludes casting heavy lures or quick-sinking fly lines, which dredge the bottom and result in frequent snags guaranteed to spook every pike in the area. Floating or neutrally buoyant lures are effective in this situation, provided they don’t go too deep on a fast retrieve. It’s not a problem if they bump the bottom now and then, but the lure shouldn’t be dragging along the bottom.

Pike flies are most commonly dressed to imitate baitfish to one degree or another, and they’re highly effective for skinny-water fishing. It’s not necessary to create absolutely accurate replicas of the dace or shiners found in a particular body of water. Essentially, if it moves like a fish, looks catchable and won’t defend itself, it’s pike bait.

I prefer fully dressed, streamer-style patterns with plenty of white on the belly, a bit of colour along the flanks and a dark back; a couple of red fibres tied in at the throat provide the final illusion. (A few years back, I even had success with some needlefish-style tarpon flies after I ran out of time to stock up on streamers between trips.) Other anglers have also developed specialized pike patterns, dressed to simulate the area’s predominant prey and tied to withstand the onslaught of a pike’s toothy maw.

“One pattern I use is tied with marabou and saddle hackles,” says Kamloops, B.C., angler Derrick Rothermel, creator of an online storehouse of information on tackle, techniques and fly patterns for pike on the fly (see www.members.shaw.ca/mrpike). “It’s probably the most productive fly I have. I guess it’s the way marabou flares that drives the pike crazy. It behaves just like rabbit strip, but lasts longer.”

In terms of rod selection, heavier is best for tackling these powerful brutes. Heavy rods also help ensure the fish aren’t played too long, enabling them to be released unharmed. This is especially important when it comes to trophy-class northerns, since they’re the prime spawners.

“The thing to remember is that pike tire easily and the recovery rate is low,” says Rothermel. “A lot of professionals I’ve talked to around the world all say the same thing-get them in as fast as you can. You don’t need to play some poor fish to death. There are plenty more where that one came from.”

Besides, the real thrill is watching a big pike rush in with its gills flared to take the bait. Whether you’re casting a plug or some concoction made of fur and feather, it’s that one incredible moment-when anticipation hits the wall and adrenalin takes over-that skinny-water pike anglers live for. Says Rothermel: “That’s what it’s all about.”

For skinny-water pike, you can’t go wrong tying on one of these lures or flies.