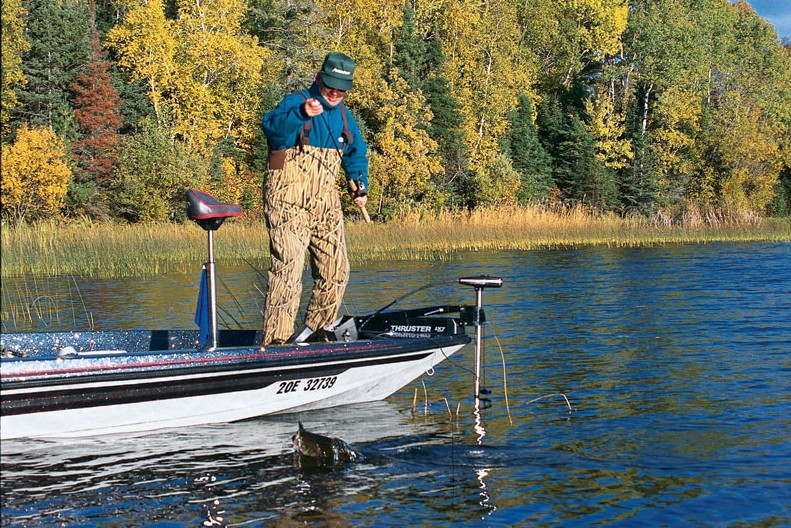 Get the Right Trolling Motor

Even though electric trolling motors have only been on the scene for a couple of decades, they’ve revolutionized fishing by enabling anglers to go places and control their boats in ways previously impossible. Every time you go fishing, you have to consider wind speed and direction, current, shoreline configuration and water depth-but without an electric motor to properly position yourself, you’re helpless. Attach one to your bow or transom, however, and you become the master of your seas.

Since many anglers now view electric motors as indispensable, manufacturers have responded by developing bigger, better and more powerful models with ever more bells and whistles. In fact, there are so many options today that it’s easy to be confused when looking for the proper set-up for your boat. Does the motor provide enough thrust? Should it have a 12-, 24- or 36-volt system? Is a foot-controlled model better than one steered by hand? Should it be mounted on the bow or the transom?

If you’re in the market for a trolling motor, just keep in mind the following seven expert pointers and you’ll be sure to make the right selection for your specific needs.

Power ratings for electric trolling motors are measured in pounds of thrust, and the size and weight of your boat will determine the amount you need. According to Dave Duffin, sales manager for Minn Kota Canada, most marine dealers, sporting-goods stores and electric-motor manufacturers have easy-to-use charts that tell you how much thrust your boat requires (see “Use the force”).

Duffin stresses, however, that these charts are established for normal fishing conditions. If you frequently fish in heavy winds, strong currents or areas like the Great Lakes where you’re likely to run into adverse weather, you should consider an electric motor with a much higher thrust.

Gary Dollahon, representative for MotorGuide and Pinpoint, agrees that the weight of your boat and its load are key factors. Nevertheless, Dollahon also suggests using the wallet method-buy the biggest motor your budget allows.

Before deciding whether a 12-, 24- or 36-volt system is best, it’s important to understand how each is set up. A 12-volt electric motor runs off one 12-volt, deep-cycle battery, while a 24-volt model runs off two batteries. As for a 36-volt electric, it operates off three batteries hooked up in series. So what are the advantages and disadvantages of each?

The obvious bonus with a 12-volt electric trolling motor is the low initial cost. Plus, you only need one battery to power the engine and a single charger to keep the battery in peak condition, thus minimizing onboard weight. The disadvantage is that if you run the motor at full speed for a prolonged period, you’ll drain the single battery and sacrifice fishing time.

For this reason, Duffin says more and more anglers are buying 24- or 36-volt electric motors. They not only provide more thrust, they’re also more efficient, drawing lower amps and running for longer periods. Still, you need to have a battery charger with two or three output channels for the additional batteries, and your boat must have room to accommodate the extra power packs.

Dollahon summarizes the voltage question this way: the smaller the system, the less efficient your battery. The most important thing to remember, he says, is that the motor must be big and powerful enough to handle your boat. There’s nothing worse than trying to fish from a boat fitted with an underpowered trolling motor. If you’re buying a packaged fishing rig, that’s why you should always look at upgrading the trolling motor at the time of purchase. It’s often the area where dealers scrimp to cut costs.

As a general rule, high-thrust, 12-volt models are adequate for most boats less than 16 feet in length. For boats between 16 feet and 18 feet, you should consider a 12/24-volt or a straight 24-volt system. But if your boat is longer than 18 feet, you need a high-thrust, 24- or 36-volt electric trolling motor.

The choice between a hand- or foot-controlled system can be a tough one because there are several pros and cons to each.

If you opt for a hand-controlled, bow-mount electric motor, for example, the front deck of your boat-the casting platform-will stay clear and uncluttered. There are no cords, wires or pedals to trip over. However, one of your hands is constantly tied up steering and running the motor when you really need it for fishing.

Alternatively, a foot-controlled electric trolling motor frees up both your hands for fishing. All the steering and speed-control buttons are located on a foot pedal for easy operation, and a cable allows you to run the motor from almost anywhere in the boat.

But that cable and pedal often get in the way, especially if you have limited deck space and two or more anglers fishing from the platform. And if something can go wrong, it usually does. Those wires, pulleys and speed dials inside the foot pedal often malfunction at the worst of times-usually when you’re fighting the fish-of-a-lifetime or your boat is being blown toward rocks.

So, which is better? Dollahon says it’s entirely a matter of personal preference. You get the same basic features in both controls, but, Dollahon adds with a wry chuckle, anglers will argue until they’re blue in the face that their preferred method is better.

When deciding whether to attach an electric motor to the bow or the transom, just remember it’s much easier to pull a boat than push it. It’s also simpler to move the bow sideways than it is to move the stern. A bow-mounted electric trolling motor, therefore, gives you much better boat control and positioning.

According to Dollahon, mounting an electric on the transom is a better option if you’re only going to use the motor for straightforward trolling or as your boat’s primary source of propulsion. That’s why transom-mounted motors are popular on electric-only lakes, rivers and ponds, where you typically fish from a small boat or rental craft.

The bottom line, say Duffin and Dollahon, is to stick with a bow-mounted motor whenever boat control and boat positioning are critical to your fishing technique or to the type of water you’re fishing.

After choosing a model that’s too small for their needs, the second biggest mistake anglers make when buying a trolling motor is choosing a shaft that’s too short. Selecting the correct shaft length, especially for a bow-mounted electric, is critical to ensuring the prop can do its job. As a rule of thumb, Duffin says, the centre of your motor should be nine inches under the water.

Because so many anglers are confused when it comes to the proper shaft length, manufacturers have developed simple guides for selecting the right match. All an angler needs to know is the approximate distance between the boat’s deck and the waterline (see “The long and the short of it” on page 83). Just remember that these guides were established for normal fishing conditions. If you usually fish in heavy wind or rough water, which will lift the front of your boat, add another five inches to the waterline measurement.

The Long and Short of It

To determine the correct shaft length for your motor, measure between the bow or transom mounting surface and the waterline, then consult the tables below. Remember to add five inches to the waterline measurement if you regularly fish in rough water and 12 inches if you plan to steer a hand-control motor while standing.

When it comes to actually attaching the motor to your boat, Dollahon stresses the importance of a strong mounting bracket. As a general rule, he says, you get what you pay for: better mounts come with higher-priced motors.

Dollahon also says it’s imperative that you position the mount in the right spot on your boat-and that you make sure there’s enough surface area to accommodate it. The key to properly mounting the bracket, he notes, is to position it so that the shaft is centred as much as possible with the bow when the motor is in the submerged run position.

Not surprisingly, Dollahon also wisely points out the need for a bit of planning before mounting the motor. “Study and re-study the stow and run positions of your motor before you drill the first hole for the mounting bracket,” he warns.

Some anglers do themselves a major disservice by powering their trolling motors with the wrong batteries. Only good quality, deep-cycle marine batteries should be used, and they must be properly maintained.Unlike car batteries, deep-cycle marine batteries are designed to be routinely depleted and recharged. But to work properly throughout their promised lifetimes, they need to be immediately recharged after each use-something anglers often forget to do. “Battery neglect is a huge problem,” says Dollahon.

To avoid this problem, get an electric motor with a simple, on-board charging system that leaves no excuse for battery neglect. These units won’t overcharge your batteries, and they come in one-, two- and three-bank models for 12-, 24- and 36-volt systems respectively. Just plug one in and walk away.

Finally, Duffin and Dollahon recommend you buy the best batteries you can afford, and with the maximum number of ampere-hours available. To calculate how long a battery will last, match its ampere-hours to your motor’s amp draw, which is the amount of current the motor uses when running at maximum speed. That way you’ll know if the battery’s got the juice you need. Still, the best battery advice is bigger is always better.

To keep your trolling motor in peak running condition, it needs regular maintenance. Follow these tune-up tips, and your electric will long be one of your best fishin’ buddies.

Avoid the frustrating problem of electrical interference on your sonar screen by mounting your sonar unit to the main motor’s cranking battery-not to a battery that runs your electric trolling motor. The idea here is to separate your sonar wiring system from the wires that power your electric motor. Ideally, you should run one set along each side of your boat.

If none of these tactics work, consider encasing the transducer cable in a rubber hose to shield it against electrical interference. As a last course of action, Duffin suggests running an 18-gauge wire with a one- or two-amp in-line fuse from the negative post of your trolling motor battery to the negative post of the cranking battery.

Otherwise, motors are now available with pre-installed, high-frequency sonar pucks embedded in the heads or lower units. Word has it they remove the problem of electrical interference altogether.