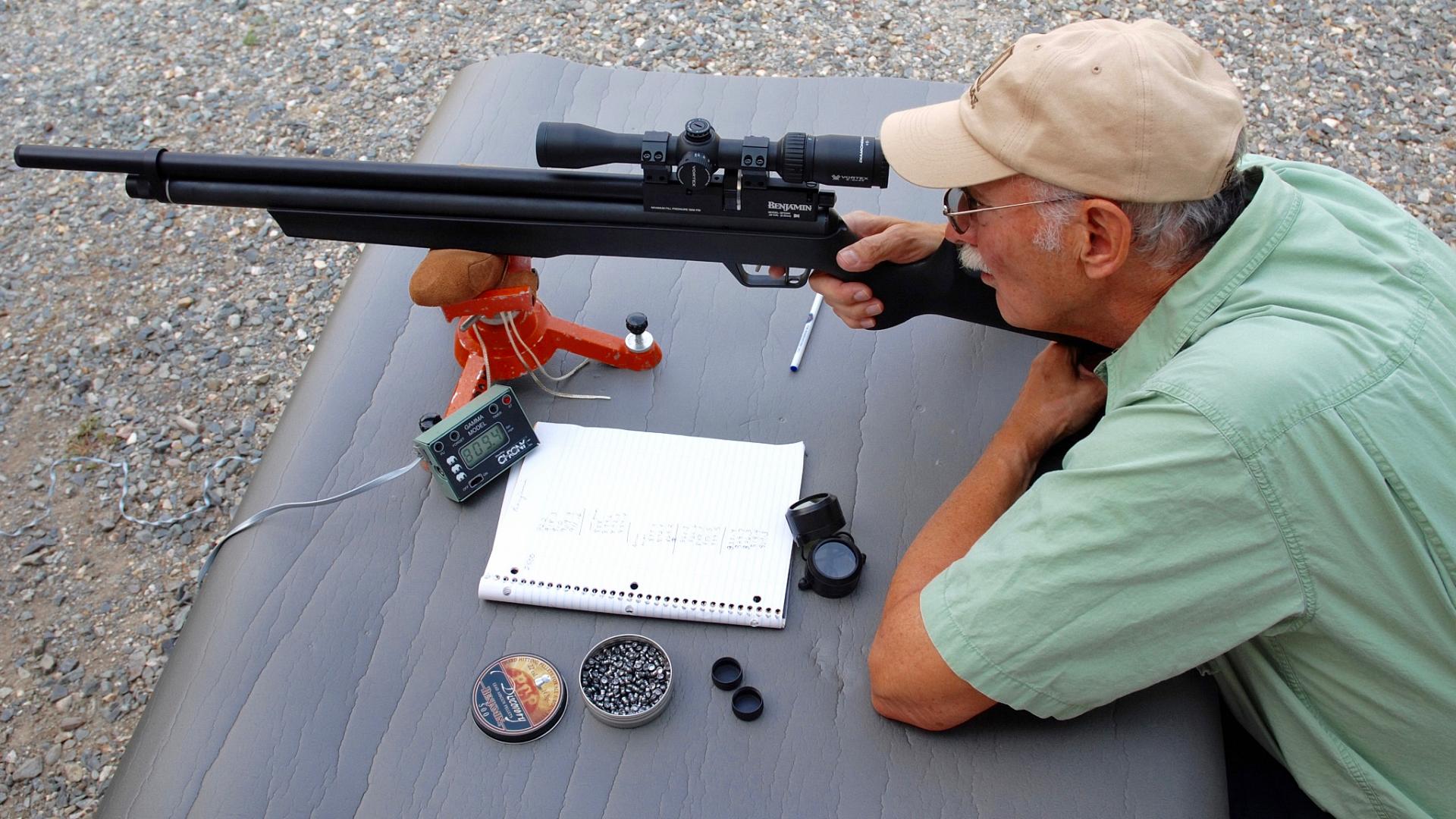 Air rifles fill an important niche in the world of shooting, and these days that includes hunting game. There’s even a behemoth .58-calibre model out there that propels a 433-grain hollow-point bullet at just under 900 feet per second. Sure, that may not be your standard commercial air rifle, but there are many models today that practically duplicate the velocity of a .22, making them effective for hunting a variety of small game and pests.

Perhaps more importantly, today’s air rifles offer an ideal way to introduce youths to firearms safety and the joys of shooting. They also provide hunters with a way to continue practising their shooting skills throughout the year. Then there’s the option of using air rifles for competitive shooting sports. The Benjamin Marauder would make a fine choice on all counts, including small-game hunting.

The gun’s PCP (pre-charged pneumatic) power plant employs a stored reservoir of compressed air, differentiating it from the many air rifles that require cocking an internal spring-driven piston before firing. Some air rifles also employ CO2 cylinders that must be replaced once they’re depleted, but the Marauder only needs to have the reservoir recharged. It uses 2,000 to 3,000 psi compressed air that can be adjusted for different velocities.

This repeater sports a 10-shot magazine for the .177- and .22-calibre models and an eight-shot magazine for the .25-calibre option. Features include a choked barrel for improved accuracy, a metal two-stage adjustable trigger, an ambidextrous synthetic or wood stock with an adjustable comb, and a reversible bolt. There’s also a built-in air pressure gauge, soft rubber recoil pad and 215-cc air reservoir. The package includes sling swivel studs and one magazine.

Since the Marauder is not a forward-recoiling air rifle, it can be scoped with a regular riflescope. So for the .22-calibre model I tested, I mounted a Vortex Diamondback HP 2-8x32mm riflescope that was focus adjustable down to 20 yards, the minimum focus distance for an air rifle.

Before attempting to either pressurize or fire the Marauder, it’s vitally important to read the owner’s manual first in order to do it properly. In testing this rifle, I set out to evaluate its accuracy using a variety of hunting pellets, and to determine whether the accuracy would diminish as the pressure in the reservoir was drained off by shooting.

At 30 yards with the reservoir pressurized to 2,500 psi, I fired repetitive five-shot groups until the rifle had used 1,000 psi, 500 psi below the recommended minimum. Using Benjamin Discovery 14.3-grain hunting pellets, the results were surprising (below).

While the velocity dropped off by about 25 fps per five-shot group, there was no change in elevation, accuracy or point of impact. My group size at 1,500 psi was still a half-inch at almost the identical point of impact as my first group, a 3/8-inch group at 2,500 psi. When I overlaid all 10 shots from these two groups, in fact, they collectively grouped into a half-inch—despite the 1,000-psi drop-off. That’s quite remarkable.

To conclude the test, I fired some additional types of Benjamin hunting pellets, once again using 30-yard five-shot groups as the performance standard. None grouped over an inch, with the Super Point and Domed Magnum pellets grouping 3/8- and a half-inch, respectively. This is super accuracy, with sufficient velocity to take out pests and some small game well beyond my test distance. This rifle certainly sparked my interest. With the addition of the Benjamin’s portable cylinder charging system, it would make a great small-game and varmint rifle—and be a hoot to plink with, as well.