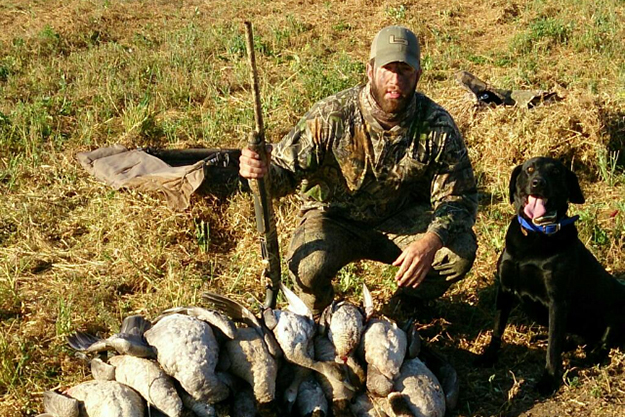 Long before Ottawa Senators defenceman Eric Gryba began skating, or even toddling on his parents’ Saskatoon property, his dad would strap him into a baby backpack and take him hunting. “Before I was allowed to hunt, I was pushing deer and retrieving ducks and geese,” he says. “If it fell in the water, I’d take off my clothes and go get it. That’s just how my childhood was.”

The other sport Gryba loved as a youngster was hockey. He excelled at it, playing for Boston University—where he earned a business degree—before getting drafted 68th overall by the Senators in 2006. Now 26, Gryba remembers sacrificing time in the blind to focus on his education and his, well, other calling. “But once you start to play pro hockey, if you have that passion for hunting, you have the time,” he says. “On practice days, I’m done at one o’clock and I will go sit in a deer stand or hunt ducks.”

Gryba’s spare time isn’t only spent in the field. This year, he put his business degree to use and started up Capital Waterfowling, manufacturing calls with two other hunting fanatics from the Ottawa area, Ryan Reynolds and Dustin Pritchard. “We’re all Canadian guys, and we’re all hard-core waterfowlers,” he says, noting their calls are made in Canada. “Our goal, and I think we’re starting to do it, is to compete with the big boys in America.”

Here are Gryba’s basic tricks for calling in Canuck ducks and geese.

Canadas make 13 notes, says Gryba, so try to master as many of them as you can. But for early-season geese, don’t over do it. “Listen to the birds,” he says. “Use what they want. If they’re going to come in with just a couple of notes, great.” Mid- to late season, when the birds get more educated and skeptical, is the time to use a wider variety of notes and more elaborate call combinations.

It’s best to show the ducks something different from what other hunters are doing, says Gryba. Sometimes a smaller, more natural decoy spread is more welcoming, for example. And when calling ducks, he says the most effective approach is to call to them only on the corners. “As fun as it is to blow the call, there’s no need to call when they’re coming right at you. You’ve already got them at that point.”

Gryba says the top-end material for his calls is acrylic—it’s the hardest plastic and creates the sharpest notes. He also uses Delrin, which is very close to acrylic but less expensive. “I personally use a Delrin duck call instead of the acrylic,” he says. “You can tell a bit of a difference—there’s more of a crispness with acrylic—but both have high-quality polycarbon inserts.” For any hunter, though, it’s the practice you put into a call that gets the results.