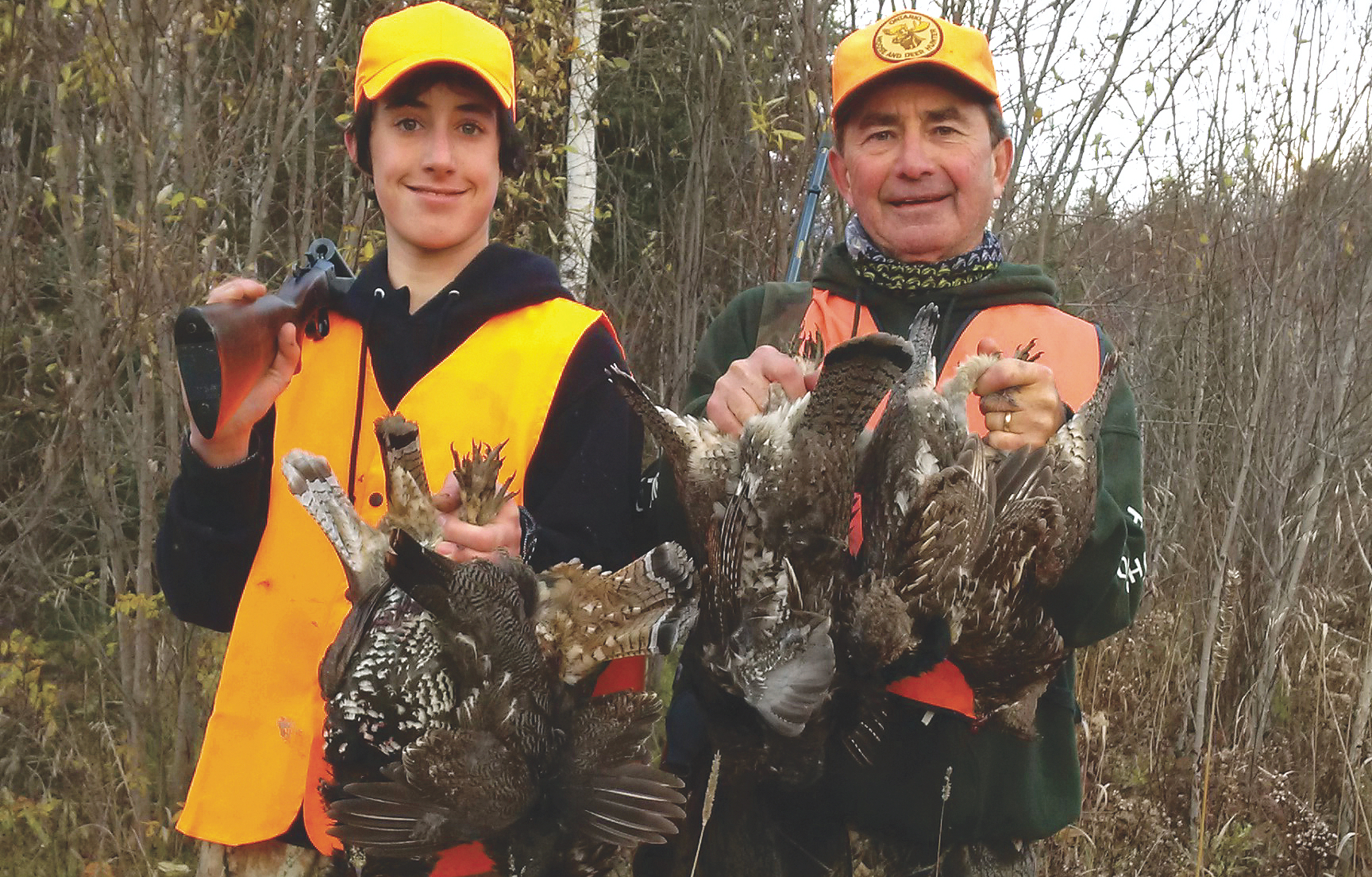 To put more birds in your game bag, try thinking like an angler when you head afield

On our best afternoon of upland gamebird hunting last autumn, my 14-year-old grandson, Liam, and I saw 43 grouse. They were mostly ruffed, but there were a few spruce grouse, too. That’s more birds in a single afternoon than many upland hunters see in a season. And it wasn’t by accident, either. Over the years, I’ve learned that you can pattern ruffed grouse as efficiently and effectively as you can pattern fish. As a matter of fact, the methods are incredibly similar.

Find the food, find the fish. That’s one of the rules I live by when I’m fishing, and the same concept applies with ruffed grouse. While the preferred foods of grouse vary according to geography—just as a fish’s preferences will change from lake to lake—there are several notable constants: the buds, catkins and berries of deciduous trees such as poplar, cottonwood, aspen and birch, as well as shrubs such as dogwood.

I never clean a fish without checking its stomach to see what it’s been eating, and it’s the same with the birds I shoot. Along with wintergreen, wild strawberry leaves and berries, clover is what I discover most often in the crops of the birds I shoot in my neck of the woods. Many days when I pop open a grouse’s crop, the sweet fragrance reminds me of a package of fresh bubble gum. For a grouse hunter like me, it’s a heavenly scent.

Wild clover grows after a forest disturbance, whether natural, such as a forest fire, or man-made. As well, natural resource agencies often provide local fish and game clubs with clover seeds to spread on the sandy shoulders of tertiary tote roads. The plant provides almost immediate ground cover, protecting against erosion and sedimentation. It also attracts grouse, as do the roadside specks of sand and gravel the birds store in their gizzards to grind up the nuts and berries they eat.

On the afternoon Liam and I saw the 43 grouse, in fact, they were all on or within a few feet of a forestry road’s sandy shoulder, which had been seeded with clover. Were the birds there to eat the plants, peck at the sand or both? Does it really matter?

You should also look for apple trees. Last deer season, I scattered some crab apples on the ground around my blind, and the number of fat ruffs that flocked to them was stunning. And this was on a remote peninsula in northwestern Ontario, accessible only by boat, where the birds had never seen an apple before.

They didn’t just peck at the plump fruit, either. Instead, they would repeatedly pick up an entire apple and swallow it in a single gulp. Had I not seen it with my own eyes, I would never have believed it was possible. If I lived in more southern climes, I’d make a point of knowing where every apple tree within 100 kilometres of my house was growing.

I wouldn’t think about hopping into my boat without having the most detailed map chips—over which I’ve laid down a lifetime supply of waypoints—inserted in my GPS chartplotters. The same goes for the two handheld units I use for hunting. And to feed my handhelds with waypoints, I rely on the management plans that natural resource agencies and forest companies are compelled to make public.

With these plans, you can typically predict with uncanny accuracy where superb bird numbers will peak during any given season for the next 20 years. You can also forecast where good grouse hunting today is going to fade to mediocrity tomorrow.

The important thing to pay attention to is where mature stands of trees, especially poplar and white birch, are going to be harvested. You then want to hunt the cut blocks from one to a dozen years after they’ve been cleared. That’s when the lush second-growth saplings are at their succulent best, attracting plump grouse aplenty. Conversely, after 10 to 12 years, you’ll notice these grouse grounds losing their appeal as the hardwood stands grow taller.

Wildfires are almost as good as tree cutting in terms of creating ideal grouse-hunting habitat. The best fires don’t burn so hot as to consume the duff layer on top of the bedrock. They also jump, burning select stands of usually mature jack pine and black spruce. With these types of burns, the green, moist pockets of poplar and birch typically only get singed around the edges, remaining as ripe root and seed sources for the neighbouring blackened areas.

It’s amazing how quickly burned areas green up with succulent growth, and how fast the grouse find them. I always check the fire records at my local natural resources office and punch the coordinates of good burns into my handheld GPS units.

Every angler knows that being the first to visit a honey hole as the sun comes up—or the last to cast as the sun goes back down—results in some of the best fishing of the day. It’s the same with hunting grouse. Of the two periods, however, I’ll take the evening shift every time if I can only choose one.

My favourite strategy is to divide whatever hunting time I have in two, so that roughly 40 per cent is spent walking the trail in and 60 per cent slowly walking out. I time it so I arrive back at my truck a half-hour after sunset at the end of legal shooting time. If I see five or six birds on the stroll in, I’ll typically spot a dozen or more on the hike out.

Keep in mind, everything from skunks and foxes to goshawks and horned owls love dining on succulent grouse flesh, and the birds know it. So, they stuff their crops quickly in the morning and again in the late afternoon, then retreat to the relative safety of nearby coniferous trees to digest their meals. That’s why I always say, give me the first two hours in the morning or the last two hours in the afternoon and you can hunt the rest of the day.

As for the best time of the season to head out, meanwhile, I again find similarities with fishing. In the fall, within three days of the equinox, for example, smallmouth bass begin leaving their summer home ranges to head to their fall and winter haunts. Muskies, on the hand, become nomadic at almost the very same time, as the water temperature drops to 15°C. Well, guess what? In mid- to late September, young-of-the-year grouse leave the roost and set out on their own to establish their own future home territories. That’s one of the reasons why you’ll typically see many more active birds running around early in the season. If you have limited hunting time, that’s when you want to head afield.

When we fish, we love to run-and-gun, repeatedly criss-crossing the lake and hitting as many of the best spots as possible. It’s a winning strategy that works equally well for grouse. Just as 10 per cent of a lake holds 90 per cent of the fish, a good grouse hunting area will have many isolated, high-percentage pockets. Good examples include recent poplar or birch cut blocks, parking lot-sized spot fires and low, moist areas where the clover is particularly lush.

These prime bird locales demand more attention, while the low-percentage areas in between are worth rushing past. If you were to spot me on one of my favourite grouse trails, you’d see me walking quickly through the middling pedestrian zones and leapfrogging ahead to the high-percentage locations. And I don’t walk robotically in a straight line. Instead, I zigzag stealthily, hunting with my eyes and ears; when I arrive at a prime location, I slow down and meticulously pick it apart, just as when I’m fishing.

Have you ever noticed how the best fishing follows a long string of hot, humid, sunny weather? If you can get out on the water just before the thunder, lightning and rain begin, you’ll typically be rewarded with the year’s best action. It’s as though the fish know that if they don’t start feeding before the bad weather arrives, they’re going to go hungry.

Grouse are equally weather-wise, which is why I always keep an eye on the local conditions. I’m blessed in that I can drop everything and be grouse hunting within an hour or two, and you can bet that’s what I do—especially in September and early October—when I hear in the forecast that raindrops are going to be falling on my head.

As with fishing, it’s important to recognize that such fine points matter most. Unfortunately, many hunters neglect to consider these subtle clues and incessantly debate the likes of appropriate shot sizes and gun gauges instead. But that’s not going to help them find the birds. Remember, the single most important reason anglers don’t catch fish is there are none where they’re fishing. And so it is with grouse—you can’t shoot them if you can’t find them.