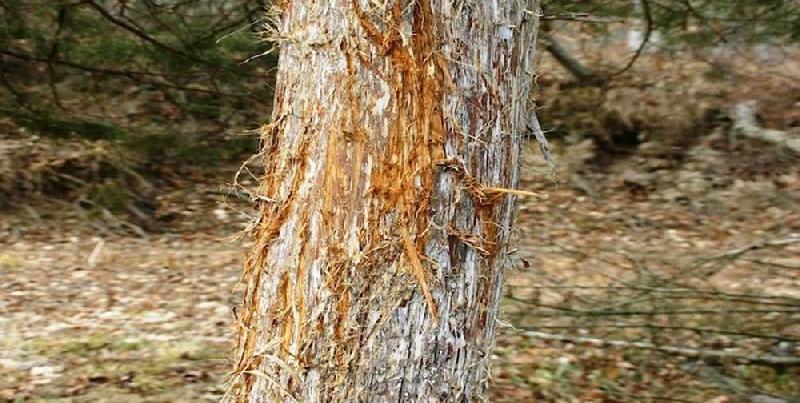 What you can read between the tines

Throughout the fall, mature bucks make hundreds of rubs by placing their headgear around a tree and grinding it with the base of their antlers. To shred that much bark, they have to start early. The biggest bucks are the first to put antler to wood because their testosterone levels begin to rise soonest, triggering rubbing as early as September. Bucks create rubs to release aggression and to muscle up their necks and shoulders for the coming battles over breeding rights. They also leave a scent signature from their forehead glands as a warning to other bucks.

If you find a tree as thick as your arm with a fresh rub in September or early October, you know you’re in the core area of a dominant buck. These rubs are hard to find because there’s still a lot of leaves on the trees, but it’s worth the effort to search them out. Look near typical buck bedding areas, such as thickets, swamps, brushy fencerows and ridges.

An early rub is not necessarily the place to hang a stand or clear shooting lanes because the buck may never return to the spot. Bucks will also thrash bushes and trees to strip peeling velvet off their antlers in September, and they won’t revisit those trees. But finding an early rub is still significant, because it’s proof your hunting area is home to a decent buck. It also offers a starting place to look for later rubs—the ones that can show you how to hunt that deer.

After a few weeks, the site of an early rub you found may develop into a cluster of rubbed trees. If so, you may have found the buck’s hangout. If the early rub has been abandoned, however, widen your search to find several trees close to each other that have been freshly worked over by antlers.

Look for shreds of bark on the ground, oozing sap and bright green wood. Deep gouges in the wood are caused by the burrs around the antler base of a hefty buck. If there are also some old rubs, and dead trees killed by rubs from previous years, so much the better. Perhaps the maker of the old rubs survived past seasons to grow an outstanding rack. Or perhaps an upstart or an even bigger buck has replaced him. Either way, you’ve found a place that bucks like.

A cluster of rubs in one place means a buck spends a lot of time there. You may have found his bedding area, feeding area or a staging area where he waits until dark before going out in open fields to feed. This is still not the place to hang your stand or set up a ground blind, but you’re zeroing in on the perfect spot. Leave this area undisturbed, and don’t return or you’ll risk making him nervous in his security cover—and even harder to hunt.

Search all around the cluster rubs for a faint deer trail or a line of rubbed trees. A single random rub only tells you a buck was in that particular spot once, but a rub line reveals a buck’s travel route between feeding and bedding areas. Rub line trees may be irregularly spaced, and the line can extend quite a distance, but somewhere along the route will be the best spot for an early-season or pre-rut set-up.

Place your treestand or make a ground blind of natural material downwind of the rub line, positioned so you don’t have to cross the buck’s trail to reach it. In the morning, set up before daylight closer to his bedding area because he’ll be returning there at first light. In the afternoon, set up closer to his feeding area before he arrives to feed at last light.

You can often tell the buck’s direction of travel from the rubs—the way he was facing to rub his antlers is generally the direction he was headed. Still, you should watch both directions, because anything can happen.

Hunting rub lines is most effective during the pre-rut in October, so bowhunters benefit most from this strategy. That said, the first week of the November firearm season is still the pre-rut, making it a good option then as well. During the peak of rut in November, bucks abandon their rub-line routines and core areas to chase or tend to does.

Once rub lines cool off during the main November rut and December’s secondary rut, there’s still one type of rub that can reveal the presence of big bucks. It’s the traditional rub—a tree or pole that different bucks rub year after year, grinding it down so much on all sides that it becomes shaped like an hourglass.

Traditional rubs are typically found on buck travel routes, such as ridge tops, saddles between ridges or near beaver dams that cross marshes or ponds. Many different bucks travelling in search of does will leave their scent on a traditional rub, and often make scrapes on the ground beneath it. If you find one, set up on the downwind side and wait all day. It takes repeated attention from heavy-duty bucks to grind a tree into an hourglass shape, so it should be worth the wait.

Read Part 2, to learn how to hunt deer scrapes.

Field editor Alan Davy searches for rubs and scrapes near his home in rural Muskoka, Ontario.