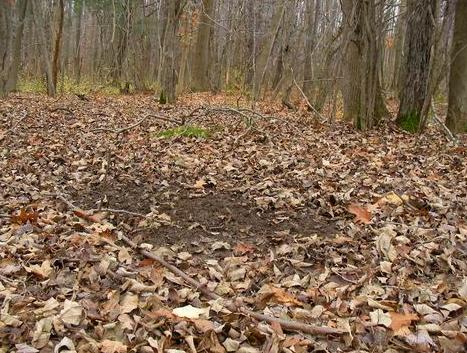 Get the dirt on these scented signposts

Just before Halloween, after rub lines lose their significance in terms of hunting, buck scrapes ramp up in importance. Scraping begins in the last half of October and carries on into November. While finding a scrape is a good sign, it won’t guarantee success unless you dig a little deeper into the mysteries of scraping behaviour.

Scrapes are quite complex, marking a buck’s unique scent signature from four different glands. First, the buck tears up a patch of earth with his front hooves, slinging the dirt out behind him. This leaves scent from the inter-digital gland between the hooves. Then he urinates on the bare patch, dribbling the urine over the tarsal glands on the inside of his rear knee joints. Finally, the buck licks a branch above the scrape, leaving yet more scent from his saliva glands. And by also rubbing his forehead on the branch, the buck deposits even more scent from the pre-orbital gland near his eyes.

By making scrapes, bucks establish their territory, keep track of rivals and announce their readiness to mate with local does. Just remember that once does come into estrus and bucks start chasing and tending to them, hot scrapes will go stone cold.

Finding a scrape is only the first step in planning your hunt. Most scraping is nocturnal, so setting up near the first scrape you find can be fruitless. Instead, search widely to find more scrapes forming a line through the woods. Just like a rub line, a scrape line marks the buck’s travel route. Join the scrapes like dots until you find the place where the trail enters thick, daytime security cover. Look for a good ambush spot downwind of this entry point.

To hunt your dirt-slinging buck, get there before first light by a route downwind of his trail. That way, you may catch him returning to his daytime cover at first light. If you have no other places to hunt, and plan to remain on stand all day, try a couple of buck grunts to see if you can draw him out to the edge of his cover for a shot.

A buck is also more likely to visit a scrape in daylight if it’s located in thick security cover. If you find such a scrape, set up a daytime stand downwind of his trail. He’s most likely to emerge from his hideout and begin checking his scrape line in the last few minutes of legal shooting light.

Also note that a buck may scent-check his scrape line downwind of the actual scrapes, rather than going right up to them, so be sure to set up downwind of his trail. The closer it is to the peak of the rut, the more a buck’s breeding urge builds up and the more likely it is he’ll check scrapes during daylight. The last few days before the rut is the best time to watch over a scrape.

You can condition a buck to check a scrape during daylight by essentially taking over his scrape. First, locate a scrape with a fresh licking branch. This is the most important element of the scrape, not the bare dirt. If there’s no branch—it will be about 40 inches off the ground with the tip chewed up—the buck may not visit it often.

To take over a scrape during the pre-rut period, dip the tip of the licking branch in a bottle of dominant-buck scent, then fill a scent dripper with the same scent (some regions, such as Ontario, allow only artificial scent, so check your local regs). Be sure to use a scent dripper that only releases scent during the warm daylight hours, not at night. Hang the dripper about six feet above the scrape so it drips into the bare soil.

A dominant buck wants to know what other bucks are around, so he’ll risk checking his scrape during daylight hours to meet the intruder he believes has taken it over. If you plan to hunt over a scrape once the rut begins, fill the dripper with doe-in-heat scent. Once you’ve got the buck visiting in the daytime, use the terrain and wind direction to set up and wait where he can’t detect you.

If you discover a good ambush point along a scrape line, you can also create an intruder scrape. To do this, find a fresh scrape several kilometres away, which ensures another buck made it. From the middle of that scrape, dig up as much soil as you can carry in a clean plastic bag or pail. Then cut off the licking branch with shears and bag it. Wear rubber boots and disposable rubber gloves to keep human scent off of everything.

Back at your ambush point, use plastic ties to attach the licking branch to an existing tree branch so that it hangs about 40 inches above the ground. Rake away the leaves under the branch with a stick, then dump the soil and spread it around evenly with the stick. Hopefully, your buck will believe another buck has taken over his area and he’ll become more vigilant about checking his own scrapes, even in daylight.

A single mature buck typically makes a scrape that’s a little larger than a kitchen sink. If you find a scrape as big as the hood of your truck, however, you’re onto something special: a community scrape. Social gathering points visited by many bucks and does, community scrapes are typically found in small clearings surrounded by thick cover, in thick cover near prime food sources or near funnel points.

Various deer will visit community scrapes during daylight, although bruiser bucks will remain nocturnal during the pre-rut. Once the rut is in full swing, however, a community scrape is a good bet all day long. Set up downwind of a trail leading to the scrape rather than right at the scrape itself. That way, you don’t risk contaminating it with human scent.

Not every scrape is worth watching, but if you find the right one and work it a little, you can, well, strike pay dirt.

Read Part 1, to learn how to hunt deer rubs.

Field editor Alan Davy searches for rubs and scrapes near his home in rural Muskoka, Ontario.