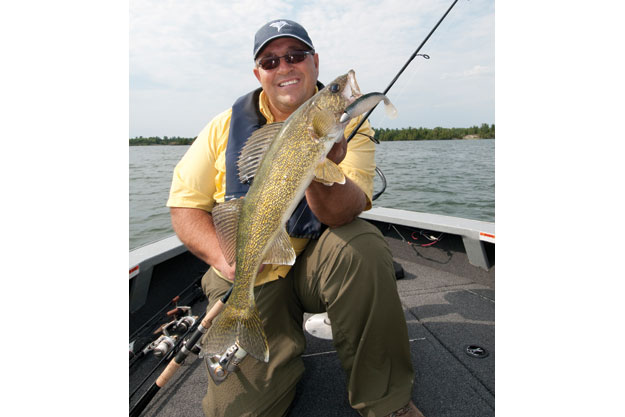 How to catch bigger walleye in fall

Fall is perhaps the most interesting season to catch walleye because the fish are in a long, gradual transition from summer to winter locations. They’re also bunching up in large concentrations and feeding heavily to sustain themselves over the coming long, cold winter.

Not surprisingly, given the highly variable conditions, many anglers find autumn to be a time of feast or famine when it comes to catching walleye, but it needn’t be that way. You can be highly successful in the fall using a variety of techniques, so long as you know where to present them.

In the typical Canadian Shield-type lakes that dot the boreal north country from Quebec to Alberta, the key is to focus on sharp structural breaklines close to deep water. The first thing I look for on a walleye lake of this type is either the deepest part of the lake or the deepest basin in the area I’m going to be fishing.

Next, I search out structural elements—underwater points, sunken reefs, humps and bars—paying particular attention to the ones that lie closest to the deep water. ThenI pinpoint the sweet spot-on-the-spot, where the bottom contour lines tighten up against one another, indicating a sharp drop-off into deep water. These edges, or breaklines, are walleye magnets during the fall.

In much bigger waters, however, such as the Bay of Quinte, Lake Erie, Lake of the Woods, Lake Winnipeg and Tobin Lake, the walleye often stage in and around the major rivermouths they’ll eventually enter in the spring to spawn. These fish are typically suckers for a trolling presentation involving wide- wobbling crankbaits such as the Rapala Deep Down Husky Jerk, #11 Deep Tail Dancer, Storm ThunderStick and Reef Runner. But don’t troll aimlessly. Instead, first locate suspended schools of baitfish, such as ciscoes and alewives.

When you find the food, you’ll also find the walleye, so mark the baitfish pods carefully on your GPS unit and troll your lures at the same depth they’re suspending. In ultra-clear-water walleye haunts such as the Bay of Quinte, snap weights and planer boards will also help to spread out your offerings and precisely present your crankbaits—and more than likely give you a trophy walleye to cap off your open-water season.