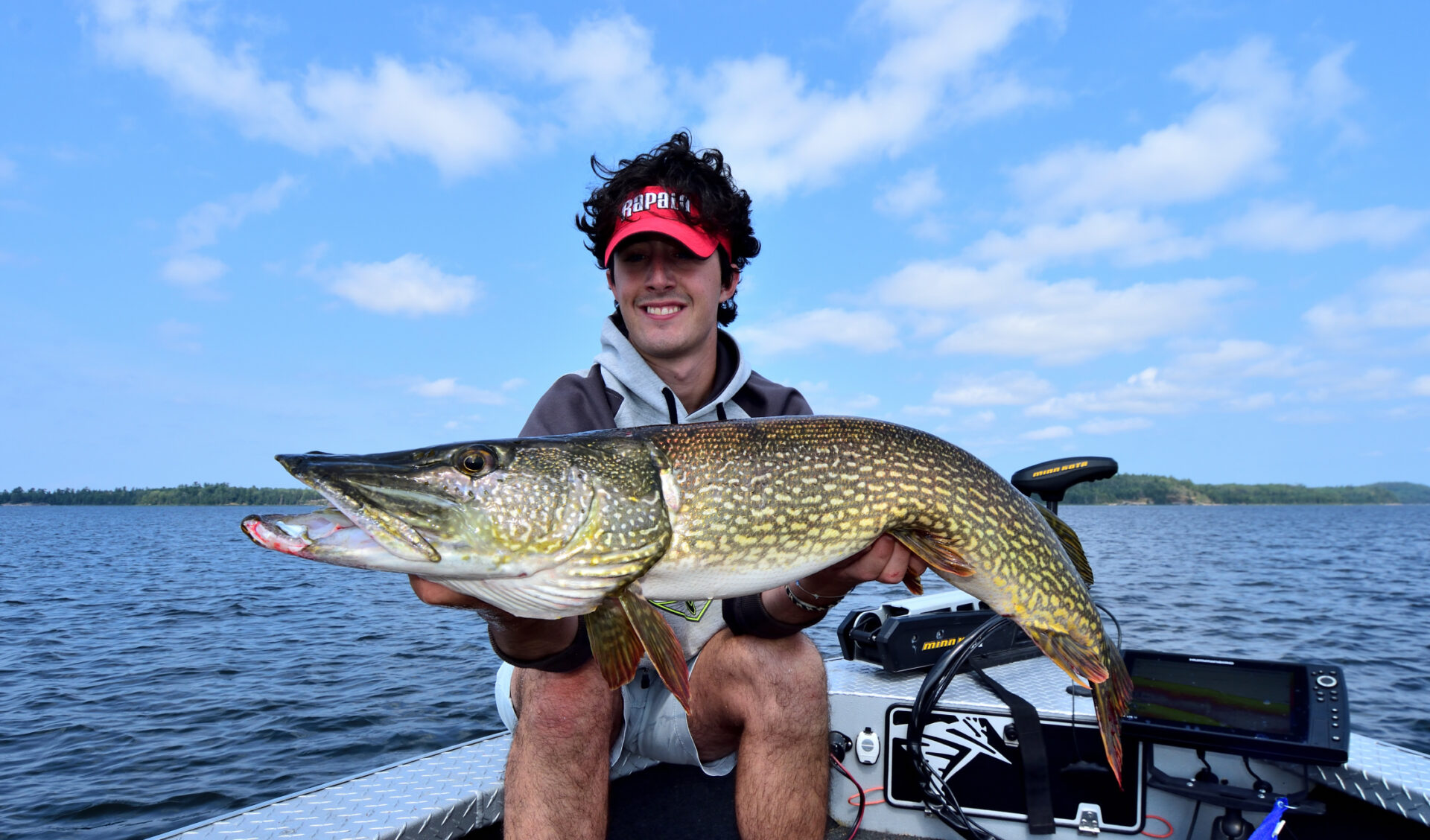 How to catch more and bigger northern pike this summer

Summer pike bite hard—just not where you think

For summer gators, search out deep weeds in cooler water

The western half of this country has been drying up, burning up and sweltering this summer under the unprecedented dome of heat, but that hasn’t stopped the fish from biting. That especially goes for the big northern pike that typically give anglers fits in the dog days of summer. That is possibly why I’ve been fielding so many questions of late from readers wondering where the big toothy critters are hiding.

Because we so often find pike around clumps of weeds growing at the back ends of bays and along fertile shorelines—especially early in the season—many anglers think northerns stay put and love the warming water. But they don’t. As a matter of fact, in order to function properly and grow, they need to regulate their body temperatures by associating closely with cooler water temperatures, in the mid- to high-60s Fahrenheit and mid- to high teens Celsius.

I’ve mentioned this before, as well, but in areas like Southern Ontario’s famous Bay of Quinte, if water temperatures rise too quickly in the late spring and early summer, and trap the fish in the shallow sections of the Bay, before they can get out into the much deeper and colder Lake Ontario, they will stop feeding and become comatose for all intents and purposes. It is so pronounced, in fact, that they will lay down tightly compressed “false” growth rings in the summer, that look like the dormant dark circles that trees exhibit in the winter.

So, it is a tricky time for the fish that love to wait in ambush in lush weeds, and yet, also desire cool water. The solution, of course, for both the pike and the pike angler is to find the deepest growing weeds in the lake, river or reservoir, especially, the ones that lie adjacent to, and drop into, the main lake basin. 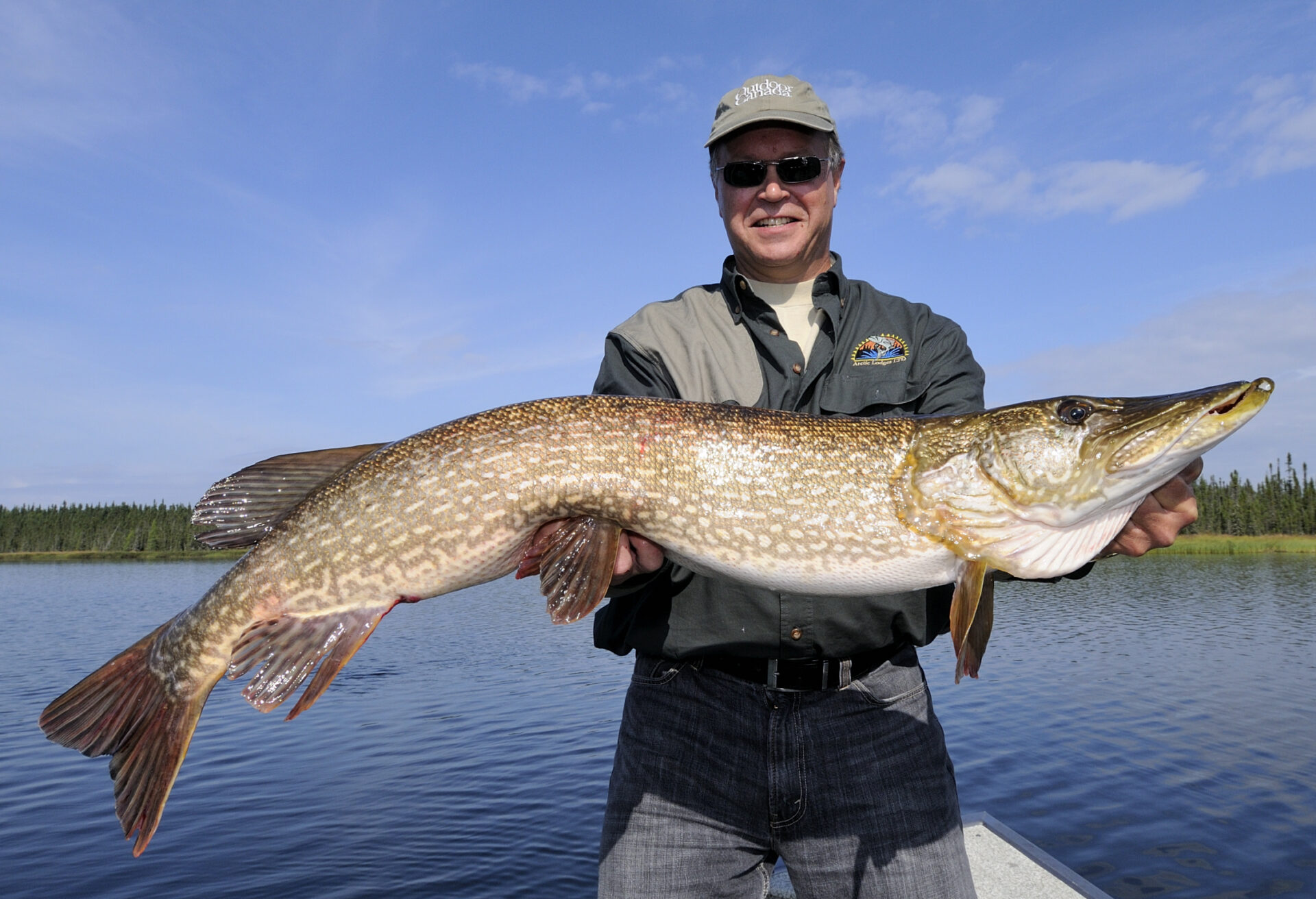 My good friend Mark Stiffel and I absolutely cleaned up on this strategy several years ago in late August when we fished Reindeer Lake along the Northern Saskatchewan/Manitoba border. We were casting C90 Williams Whitefish spoons in the Nu-wrinkle half gold/half silver pattern. We also removed the treble hook from the spoon, and replaced it with a single siwash hook, to which we added a 5-inch white Mister Twister grub.

With the boat positioned at the mouth of a bay that fronted the deep main lake, we used the spoons as search baits to find the weeds that our guide thought grew somewhere in the area. I’ll never forget when Mark finally connected with the first clump of cabbage because he said, nonchalantly, “There’s one” …. followed quickly by …. “There’s ONNNNEEEE!”

As soon as he popped the Whitefish free from the weed stalk, a gargantuan pike jumped on it and crushed it. It turned out to be the biggest northern pike caught and released at the lodge that season.

The same thing happened the other day when my grandson Liam and I pretty much duplicated what Mark and I experienced back in 2014. We were fishing a deep weedline for muskies, and although we were casting up into only six to eight feet of water, if we’d have turned around in the boat 180-degrees, we could just as easily have flung our baits out into 60 to 80 feet of water.

At first Liam thought he’d hung up on an overly thick clump of cabbage, but the pike had hit from behind, as they often do, throwing slack into his line. So he reeled in quickly, felt the weight of the fish and stung it big time. A couple of hours later, after we’d caught two muskies, including one acrobat that thought she was in the Olympics, I felt another bump, set the hook and landed our second bonus pike of the day. I hate to think what kind of damage we could have done if we had actually targeted the prodigious predators, that are never far from weeds… and cool water.