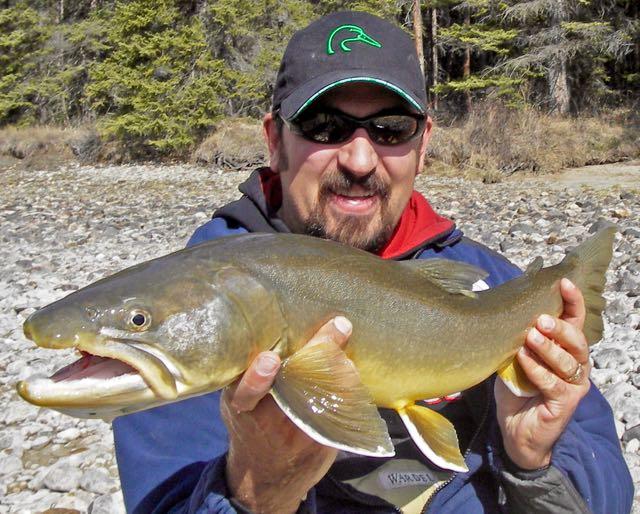 How to extend your trout season by fishing for the West’s big, strong bulls

After many of the West’s famed waters have closed, you can still rope in feisty bulls

My big hand-tied Woolly Bugger had just passed a little eddy behind a large rock when I saw a flash, quickly followed by a wicked tug on the end of my 7-weight fly rod. I set the hook and was quickly into my backing as the giant fish used every ounce of its strength trying to break my leader. It was a behemoth hook-jawed bull trout, and the fight was on!

Falling in the char family, bulls are a true coldwater fish. Unlike most of the West’s other char and trout, which prefer fast-moving riffles and rapids, bulls spend their time in the large pools and backwaters of mountain rivers and creeks—even those you can practically jump across. You can also find them in the deep, icy waters of several mountain lakes in western Alberta and eastern B.C. Bulls prey mainly on other fish, especially Rocky Mountain whitefish, which helps explain why they can grow to such large sizes.

Never fought a bull? Let this handy primer get you ready for the ring.

If you’re preparing to head out on a late-season journey to fish small mountain streams and rivers for a chance at catching and releasing a huge bull trout, be sure to bring an assortment of gear. Some spots may be too tight to cast flies, but you’ll have no problem threading the needle with a light spinning rod. In that case, throw a few spoons in your tacklebox, such as 3/8-ounce Len Thompsons, Kamloopers and Pixees, as well as some Mepps Aglia, Panther Martin (below) or Blue Fox Vibrax in-line spinners. Also bring some four-inch jerkbaits, such as Rapala Original Floaters, and a few 3/8-ounce jigs in a variety of colours.

For fly gear, I’ve had my best luck using big, ugly streamers. Bring a combination of styles and colours, but these large predators will usually hammer anything that’s thrown their way when the time is right and the rivers and streams are full of spawning whitefish. I’ve also had spectacular success with giant Conehead Woolly Buggers. A word of caution, though: These large Buggers can fly erratically as you get deeper into your cast. Once you’ve been drilled in the back of the head, you’ll probably consider wearing a hockey helmet and full body armour.

Concentrate on fishing deeper water, large pools and backwaters, and behind structure such as big boulders and logs. Make sure you spend the time to work the pools completely before wading into the water. These trout are easily spooked as soon as you step foot into the crystal-clear streams they call home. Wade softly, keying in on structure where you think they might be lying in wait, ready to dart out and hammer anything that passes by.

It’s not uncommon for a big bull to give chase to a smaller hooked fish; I’ve even had them hit another fish on the line a couple of times over the years. When that happens, it’s time to get a big Rapala jerkbait or large streamer into the pool and work it aggressively to imitate a wounded fish.

If you plan to fish from shore or cast from a boat on a mountain lake, you can use the same tackle and flies you’d use on rivers and streams. I’ve had good luck on lakes casting jigs into the shallower water or fishing them off the bottom in deeper pools. If you want to try trolling, use a large spoon, bucktail fly or a crankbait.

It’s tougher to find bull trout in lakes, so spend some time learning the lake you’re heading to fish beforehand. Start your search where any creeks flow into the lake, as this is where the whitefish will most likely be. And if you find whitefish hanging out, you can be guaranteed a big old bull trout is lurking nearby.

When fishing from shore, try casting out into the mouth of the creek. In many mountain lakes, fall brings schools of whitefish and other smaller baitfish into these areas, so cast out as far as you can and work your lure or fly back into the current. I’ve had great success casting crossways, working my offerings back through the inlet. Also keep walking along the shoreline, covering as much water as possible. And as you retrieve your lure or fly, alternate the speed, as this will sometimes trigger a following bull to strike.

If you have the chance to get out in a boat, slowly work your way to the creek mouth, being as quiet as possible so as not to spook these wary trout. Don’t get in too close—just enough to effectively work the water. Start casting on one side of the inlet and work your way across to the other side. Bulls love to hang out in these places, and if they see something they like, you can be assured the hit will jar your teeth!

Trolling, though less exciting at times, can also produce some fantastic action on both spinning and fly tackle. I like using a 7- or 8-weight fly rod with a ton of backing and a full-sink or 10-foot sink-tip line, depending on the trolling depth. I’ve pounded many big bulls using this technique with a monster bucktail or marabou-type streamer.

When trolling with my spinning rod, on the other hand, I’ve had my best days using a large spoon (above) or crankbait, letting out roughly 75 to 100 metres of line. By jerking the lure every so often, you can sometimes instantly prompt a hit. And be sure to pay close attention to structure, humps, drop-offs and shelves on your fishfinder, as lunker bulls often lie in wait in these places for an easy meal to pass by.

Whether you fish in lakes, rivers or streams, using either spinning or fly gear, expect an incredible fight from these fish. Sure, they may not clear the water with explosive strikes as some other trout do, but they more than make up for that in sheer brute strength. Expect your heart to skip a beat as they peel off line, bulldogging you until your arms are ready to fall off. And that’s no bull!

Wadena, Saskatchewan’s Jeff Schlacter ropes in western bulls whenever he gets the chance.

The bull trout is the official provincial fish of Alberta. Sadly, however, it wasn’t always held in such high esteem. Once considered a trash fish, bulls were often thrown onto riverbanks and left to die by anglers who felt they were preying on browns, brookies and rainbows, the more sought-after introduced trout and char species. Habitat loss and pollution have also taken their toll on them.

In 1995, the Alberta government finally stepped in to rescue the bulls, introducing zero catch limits and other conservation measures, and helping the species make its slow comeback with the catchy slogan “No black, put it back!” (Unlike other char, as well as trout, found in Alberta’s waters, bulls have no black spots or markings on the dorsal fin.)

So, when you’re lucky enough to land a monster bull trout, be careful while handling it and be sure to get it back into the water as soon as possible. These incredible trout have persevered and are gradually overcoming the obstacles we’ve placed in front of them. Bull trout are a genuine treasure, and all anglers should do what they can to help protect them.