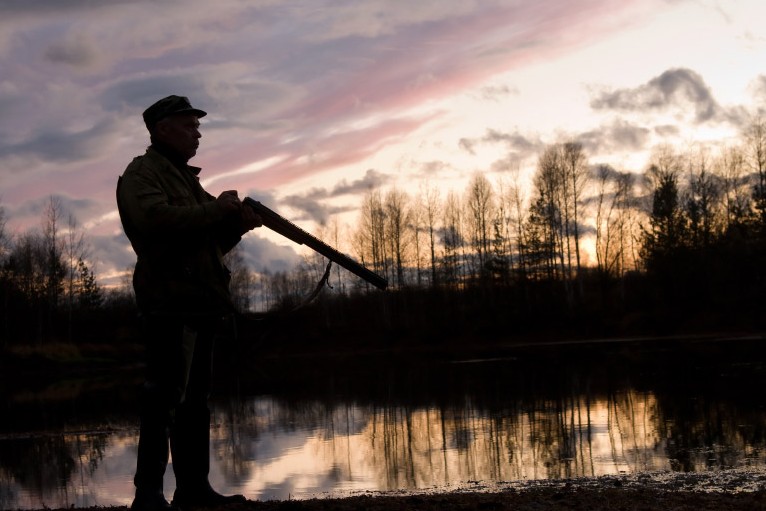 How to hunt and fish alone

Solo sojourns are cool, just be sure to play it safe

The white-tailed doe bolted from the woods and bounded past me just 10 yards away. Instantly, I dropped to one knee, shouldered my rifle and focused on the gap in the trees she’d just run through. Thirty seconds later, the scope was filled with a rut-crazed four-by-five buck, so close I could see his frosted whiskers. When I squeezed the trigger, the buck dropped.

After the sound of the shot faded into the surrounding hills, there was nothing but silence. There was no hunting buddy to say “Lucky shot” or to teasingly ask why I hadn’t held out for a bigger buck. No, on this day, I hunted the way I sometimes like to—alone.

Hunting and fishing is often a team effort. We all have close friends or relatives with whom we head afield, and we cherish those special relationships and the memories we make together. But every now and then, like many sportsmen, I like to experience the terrain, the water, the fish and the game by myself. I want to rely on my own wits, make my own decisions and determine myself what will constitute success. I also make sure I’m going to return home in one piece.

As with any fishing and hunting outing, going solo takes some planning. In this case, though, that can mean down-planning, as in choosing outings that aren’t as physically challenging or as risky as those you might do if you had company.

For example, don’t try to climb that remote mountain, where a twisted ankle or other relatively minor injury could be fatal if you have no one to help you. Similarly, don’t risk hypothermia or worse by waterfowl hunting in freezing rain or a thunderstorm. Nor should you attempt to boat across a white-capped lake in hopes of reaching a quiet bay on the other side, or wade across a fast, deep stretch of river.

Hunting and fishing solo means choosing places closer to home, in terrain that’s more user-friendly (read gentler) than where you might otherwise go with a partner or three. And if you aren’t in top shape, certainly don’t push your body to do things it can’t safely and comfortably do. Don’t worry—you’ll still have fun and you’ll still find fish and game. But you’ll be doing it with minimal personal risk.

Everybody likes to return home safely, but it’s always good to have a backup plan. Make sure to tell others where you’re going, in detail, and when you expect to be back. Leave a map if they aren’t familiar with the area.

Also set an agreed-upon panic time—the deadline when authorities should be contacted if you haven’t returned. When you do get home, let your contact know right away. If you’re running late, phone from the road. Solo trips are not the time to stay out longer than you’d planned, no matter how good the bite might be or how much game you’re seeing.

Still, accidents do happen. Make sure you bring enough food and water, as well as a first aid/survival kit that includes a headlamp, small tarp, cord, knife, warm clothing, matches, bandages and extra shells. Going where cougars or bears live? Also pack pepper spray. Basically, you need to take all the usual safety precautions you’d normally take when hunting or fishing with others. And then some.

Some hunters and anglers don’t like technology, preferring to rely on their own wits and skills. But when you head out alone, the likes of cellphones and GPS units can sometimes be better than having another person with you to help out if things get hairy. They could even mean the difference between life and death.

Tuck your cellphone into a zip-lock bag and keep it in a pocket or pack. Sometimes, even with limited cell coverage, it’s possible to send an emergency text when the signal’s not strong enough for an actual phone call. If you can’t get a signal in a low-lying area, you can often get one by climbing a hill or ridge. Ditto for two-way radios. A handheld GPS unit, meanwhile, can help you from getting lost. It can also provide your coordinates to give to searchers if you can reach them via radio or cellphone.

If you insist on going solo to remote areas, borrow a page from avalanche safety experts and pack an emergency locator beacon. All you have to do is activate it and help will be on its way. Your buddies back home might rib you about it—but at least you’ll be alive.