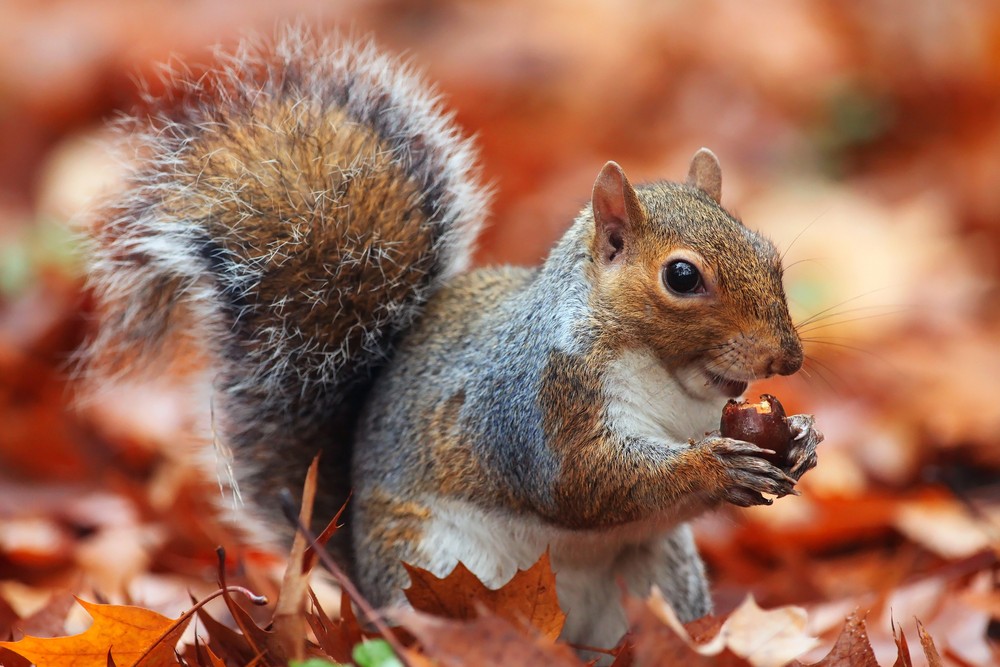 How to start hunting squirrels

With so many hunters going grey, it’s no secret hunting’s future depends on getting more young people interested. So, what’s one of the best ways to do that? Fall tree squirrel hunting. Give youngsters a taste of the action and they’ll soon ditch the game console for another shot at some bushytails, then hopefully progress to more challenging hunts. All it takes to get them started is the right gear and a little know-how. And if you’ve never hunting squirrels before yourself, you’ll no doubt enjoy the lessons as much as your young student.

If your young hunter has yet to learn how to accurately shoot a rifle, let him or her carry a shotgun instead. And if you’re hunting near a built-up area, a shotgun is a must—unlike .22 bullets, which remain dangerous for more than a kilometre after they’re fired, shotgun pellets will fall harmlessly to the ground within 100 metres or so.

A shotgun is also a good choice in the early fall when the leaves make it nearly impossible to get a look at a squirrel in the clear. And pellets will bring down a squirrel playing peek-a-boo behind a screen of leaves, something you just couldn’t do with a .22. Most shots are within 30 metres, so #5 shot will handily tumble squirrels.

Choose a shotgun that fi ts the novice. Try a .410 or 28-gauge for small beginners, and go up to 20-, 16- or 12-gauge for huskier kids. Standard 2.-inch shells are all you need. Modified or full chokes are good choices, but to ensure good pattern density for a clean kill, be sure to get within 30 metres of the squirrel before shooting.

For close shots inside 20 metres, teach the novice to aim a couple of inches away from the squirrel’s head, hitting the skull and chest with the edge of the pattern. Centring the squirrel in a dense pattern will riddle the prime meat on the hindquarters with pellets.

For hunting in the big woods, the .22LR cartridge is an awesome choice for squirrels once the leaves are down. But make sure your protege can hit a small target with it by first zeroing in your rifle on a bench rest, with the bullets you’ll be using. If you sight-in specifically for squirrel hunting, you’ll get consistent clean kills, and lots of them. Your young hunter needs plenty of shooting practice, too.

With a scoped .22, sight-in dead on at 25 metres and you’ll hit within a quarter inch of that from 20 metres right out to 50—the likely range you’ll see squirrels. Simply centre the crosshairs on the middle of the animal’s head and touch the trigger. Squirrel stew. At very close range—five to 10 metres or less—this set-up will hit an inch or more low. So if a squirrel gets in your face, remember to aim 1. inches above its head.

If your .22 has iron sights, zero it in at 35 metres and it will hit within a quarter-inch of that between 20 and 40 metres. But also practise a few shots at five and 10 metres to see how it hits close up. Few people can knock down a squirrel beyond 50 metres with a .22, so it’s far better to learn how to get close.

Many rifles shoot standard velocity (1,070 fps) 40-grain solid bullets more accurately than fast-stepping 32-grain hollow points. When squirrel hunting, choose your bullet for accuracy rather than power, because the critter’s head or chest is a small target. Any .22 bullet will kill a squirrel if you can hit it right, but standard velocity bullets are also much quieter than those that zip by at 1,640 fps. Squirrels tend to ignore the pop of slower bullets, but the loud crack from a hotter round puts them on alert. Proficient shooters can hit squirrels at longer ranges with the .17 HMR round, but at a velocity of 2,000 fps, the tiny bullet is too explosive on impact and damages too much meat.

Black-powder shooters should use a .32-calibre muzzleloader. With this rifle, a popular tactic is to “bark” the squirrel—aim for the tree trunk or a branchclose to the squirrel’s head so the exploding bark and ball fragments kill the animal without damaging the meat.

Choose a hunting area you know has nut-bearing trees. Beechnuts are the first to ripen in September, and squirrels love them, along with later ripening acorns, chestnuts and hickory nuts. Move quietly, doing more looking and listening than walking. You’ll probably see the flick of a bushy tail rather than a whole squirrel, so watch for any movement in the treetops, on tree trunks or on the ground.

Also listen for the sound of shell fragments falling on the leaves below a squirrel gnawing on a nut—it sounds like the patter of light rain. When you hear a squirrel cutting nuts, start scanning the branches above. If you see one out of range or partly obscured by foliage, slowly move toward it. Stay out of sight by lining yourself up behind a wide tree trunk as you close in for the shot.

Squirrels have an annoying habit of scurrying around to the far side of the tree, denying you a shot. You can still get the squirrel though with a little teamwork. One hunter simply walks past the squirrel, making sure to be seen or heard, while the other hunter hangs back, remaining hidden, motionless and within range of the tree. As the squirrel moves around the tree to escape the first hunter, it will present a shot to the hunter who hung back. For a safe shot, the shooter must use the tree trunk as a backstop, and make sure the shot is at a high angle away from the other hunter.

Lone hunters can also still get their squirrel if it runs around to the other side of the tree. How? Bring along a pocketful of rocks. When a bushytail goes around the tree, throw some rocks so that they land on the side the squirrel is on. This should frighten the squirrel into scrambling back around to your side, allowing for a shot.

You can also hang your coat and hat on a branch in plain sight, then move quietly around the tree. To hide from both you and your coat, the squirrel may move only a quarter of the way around the tree, giving you a shot.

Another trick to draw out hidden squirrels is to rub two quarters together between your thumb and finger, making the sound of a squirrel gnawing on a nut. Since squirrels are both curious and territorial, they may come out of hiding to confront the newcomer.

If you don’t know exactly where the squirrels are, you can trick them into giving away their locations by
using a squirrel call. Shake the rubber bellows to mimic the squirrel’s chatter, slap it to make a bark or blow into it for a distress call. Use the bark and chatter calls first, listen carefully for an answer, then lock onto the squirrel’s location and sneak toward it.

As a last resort, use the distress call while shaking a branch or kicking leaves to simulate a squirrel struggling with a predator. Other squirrels hearing this will give an alarm cry signalling their location, but they’ll also be on alert. Wait for them to resume feeding before you stalk them.

Once you’ve become familiar with the woods and the resident squirrels’ habits, you’ll know where they like to be—and when. Now it’s time to sneak into that stand of mast-bearing trees and sit still and wait. As with deer and turkey hunting, movement will ruin your chances of success. Camo clothing, gloves and a face mask are definite assets.

When you first arrive, the squirrels may go on alert, so stay motionless for 15 minutes or so until they get back to the business of eating and hoarding. When a squirrel finally shows itself, make the shot but don’t immediately recover the kill. If you do, any other squirrels will go into hiding for quite a while. Instead, leave the kill and the other squirrels will reappear after a couple of minutes, allowing for numerous shots without spooking them into hiding or leaving the area.

Squirrels play dirty—they go into holes in tree trunks or hide in their twig nests in the treetops. But don’t shoot into holes and nests trying to scare them out. It won’t work, and if you hit a squirrel, you won’t be able to recover it. So, what to do? Play dirty right back. I’ve found that if you reflect sunlight with a small mirror into the hole, the squirrel will come out angry, presenting itself for a shot. But if your quarry is hiding out in a twig nest, it’s best just to wait. And eventually teach the squirrel a lesson of its own.

To make the most of you kill, read “How to Skin a Squirrel.”