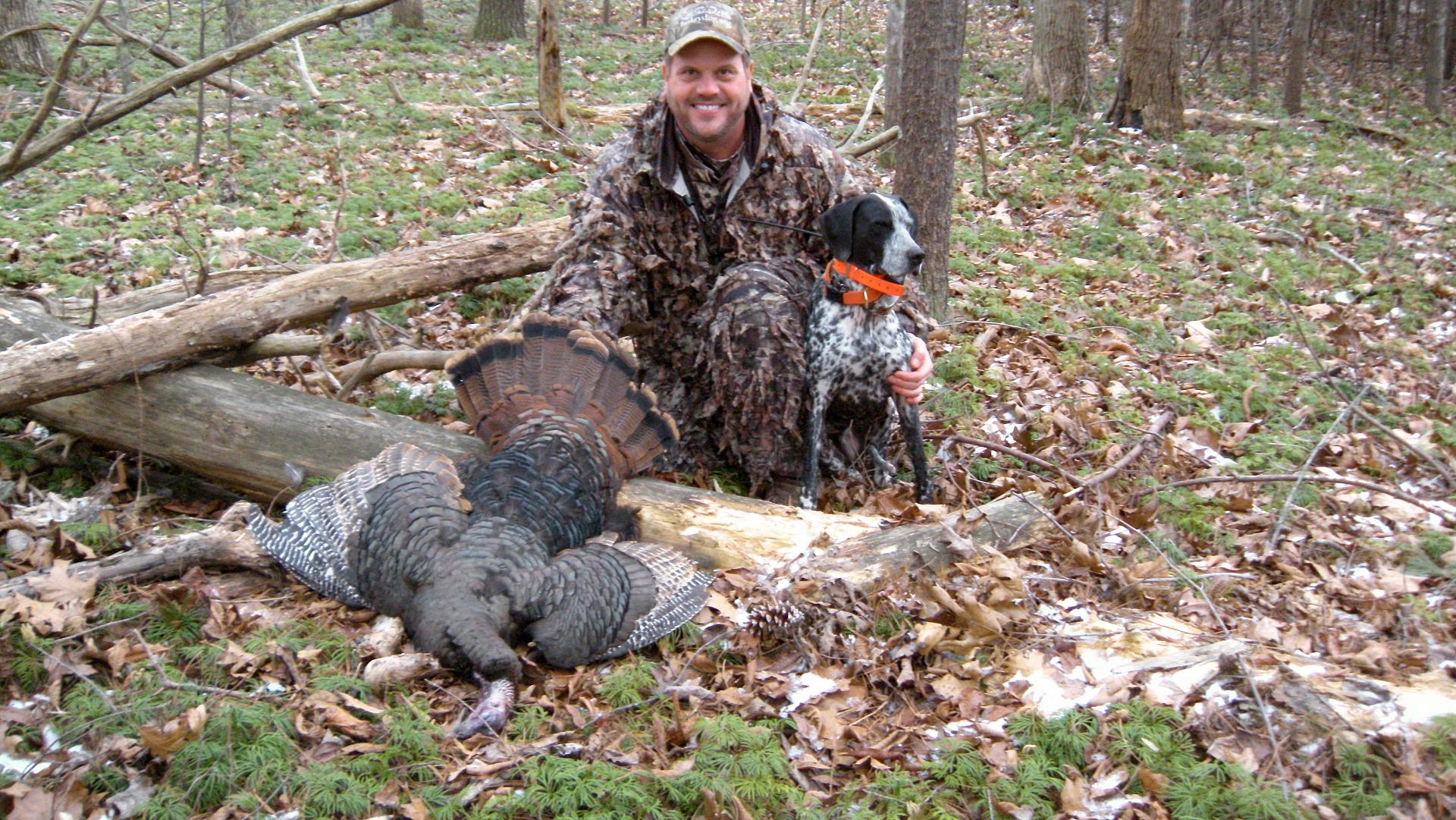 How to train your dog for fall turkey hunting

For an exciting and successful wild-turkey hunt this autumn, train your dog to get the job started

They’re out there, somewhere, those flocks of fall wild turkeys, scratching and pecking their way through thousands of acres of hardwoods and fields. But where? And even if you know where to find them, how do you get to within shotgun or bow range? Unlike spring toms in search of hens, after all, fall turkeys are not as inclined to come to calls. While they may give a courteous cluck or yelp in response to your calls, they typically don’t change course to investigate turkey talk. And that’s where a dog can help.

A well-trained turkey dog hits the ground running in search of scent and doesn’t let up until he finds it, follows it to the flock and runs in among the birds, barking and scattering them in all directions. And when the hunter hears the barking and subsequent turkey alarm calls, it’s time to move in, bring the dog to his or her side and set up to call the birds back once things have quieted down. Sounds simple, right? It’s certainly a straightforward tactic—once your dog is trained what to do. Here’s how to get to that point.

If you haven’t already done so, start with basic obedience training so your dog will come reliably when called, and stay put when told. Then teach the dog that he hunts with you and not for himself by taking him for walks in the woods all year long. Let him run free, but call him in every three to five minutes or just before he get gets out of range of your call-back command, whether it’s a whistle or your voice.

Be sure to praise the dog when he comes in, then immediately turn him loose again to do what he is hard-wired to do—hunt for scent. But don’t expect him to come in promptly if he’s trailing scent. That’s his strongest instinct and what you want to encourage. Never discipline a tardy return if you haven’t seen what the dog has been doing. He may have been doing exactly the thing you want him to.

After a while, the dog will get the timing of your call-back routine and start checking back with you on his own. When that happens, start frequently changing your direction of travel and calling him in. That way, he’ll recognize he needs to check in to keep track of where you’re going. The goal is to have a dog that hunts a wide swath in front of you, sweeping back and forth like a wiper blade, while keeping track of your movements. That way, you stay in charge of the hunt and you’ll be able to hear him bark when he scatters a flock.

The dog also needs to be conditioned to loud sounds so that he won’t be terrified the first time you shoot near him. Start by banging a pot while he eats, then progress to a cap gun, gradually moving closer to him. Once he starts ignoring the noise, take the training outside.

When the dog is about 50 metres away running around in the woods, fire off a shotgun round, then call him in and give him a treat. If the dog seems bothered by the sound—watch for him dropping his tail or refusing to come in—back off to 100 metres and repeat the exercise until he ignores the boom and comes running, tail held high.

As long as the dog seems unbothered by the sound, move a little closer to him on each outing until he ignores the shot and comes in with his tail wagging. The goal is to make the dog think gunfire is a good thing. If you don’t condition the dog like this, be warned: the first time you shoot a turkey near him, he may run straight back to the truck to hide under it, and hate everything about turkeys till the day he dies.

You also need to teach or encourage your dog to find turkeys with his nose. Use a wing or foot from a carcass to let him get familiar with the scent; pet and praise him when he has the turkey parts in his mouth. Next, tie him up or kennel him while you drag the turkey foot or wing through the woods on a cord and leave it out there. Then turn the dog loose where you started dragging, and let him follow the scent trail until he finds the foot or wing.

With a pup, make him turkey crazy by letting him chase a turkey wing tied to a cord that you pull around in front of him. Tease him with the wing until he barks, then praise him for barking so he’ll know you want him to make noise when he finds turkeys—the key to scattering the birds and telling you where to set up.

After scattering a flock, the dog must lie quietly beside you. To teach him to do this, sit on the floor or a low stool and make the dog lie down for a half-hour beside you after his exercise period. Start with him on a leash if you have to. Soon, the dog will enjoy this bonding time and yield to it.

When he lies beside you in the field after scattering a flock, cover the dog with a camo sheet or put him in a camo duffle bag, with just his head sticking out. This both hides the dog and reinforces to him that he can’t move. To get the dog accustomed to a camo sheet, first lay it where he sleeps for a few weeks. Then pull it over the dog’s back legs when he’s lying still bedside you. Gradually, cover more and more of him as he accepts it, until just his head is exposed.

If you opt for the duffle bag, get the dog to go into it willingly by putting a high-value treat inside. Place it near the opening initially and, over time, gradually move it farther into the bag. Then put the dog’s food in the bag each day. Take it in small steps and always keep it fun for him—never force him in.

Once the dog is comfortable with the camo covering or duffle bag inside the house, run him in the woods and repeat the process there so he knows the rules apply in the woods, too. Remember, if the dog is panting, he’s hot, so let him cool off before expecting him to lie under a covering. Practise your turkey calls during these training sessions so the dog becomes accustomed to them and accepts that when you’re calling, he’s to lie still.

Scout the area you’re planning to hunt to discover where flocks roost. Then sleep in, have a good breakfast and put your dog on the ground near the roost after fly down so he can pick up their scent. If you see a flock of turkeys in a field, try to move them into the woods by letting them see you from a distance before letting the dog scatter them. Otherwise, if they scatter in a field, they’ll be able to see and follow each other and easily regroup. By scattering them within the woods, however, they tend to go off in all directions because they have to watch out for trees and limbs, and can’t keep track of where the others went.

Remember, the name of the game is to break them up and call an individual bird back into gun or bow range. Turkeys separated from their mates are eager to get back together and will readily come to turkey calls, believing them to be from a member of their scattered flock.

When it’s time to call in your bird, set up a small blind of natural vegetation or carry a sheet of camo fabric to drape over some dead branches stuck in the ground in front of you. Since adult hens and their poults typically flock together in the fall, while gobblers break into separate groups or roam alone, use hen calls to bring in the hens and tom calls to entice jakes and toms (both sexes are fair game during Ontario’s fall hunt).

Again, though, what truly separates this hunt from other turkey techniques is the use of a well-trained dog. And once you watch a high-energy canine work his magic in the fall woods, one thing’s for certain—turkey hunting will never be the same for you.

For more on hunting turkeys alongside a dog, go to www.turkeydog.org.

What makes a dog a good turkey-hunting companion? If the dog has these qualities, you’re in business: a strong prey drive, stamina, a keen nose and obedience. Prey drive and stamina keep the dog on the move, quickly covering a lot of ground in search of scent, while a keen nose is essential for actually finding a turkey trail. Finally, obedience will bring her back to you and keep her still and quiet after the flock has scattered and it’s time to call in your turkey.

Prey drive and good noses are common traits in bird dogs such as pointers, setters and spaniels. Of course, trailing hounds such as Treeing Walker, Bluetick and Plott hounds also have good prey drive and excellent sniffers. All of these could make good turkey dogs. The only breed developed specifically for turkey hunting is the Boykin spaniel, a rugged, compact and hardworking dog bred in South Carolina for finding and scattering turkeys and retrieving ducks.

Though not officially recognized as a breed, the Appalachian turkey dog is another great gobbler getter. A hound-cross is yet another option, though it would likely be more challenging to teach the dog to trail turkeys rather than furred game such as deer and rabbits.