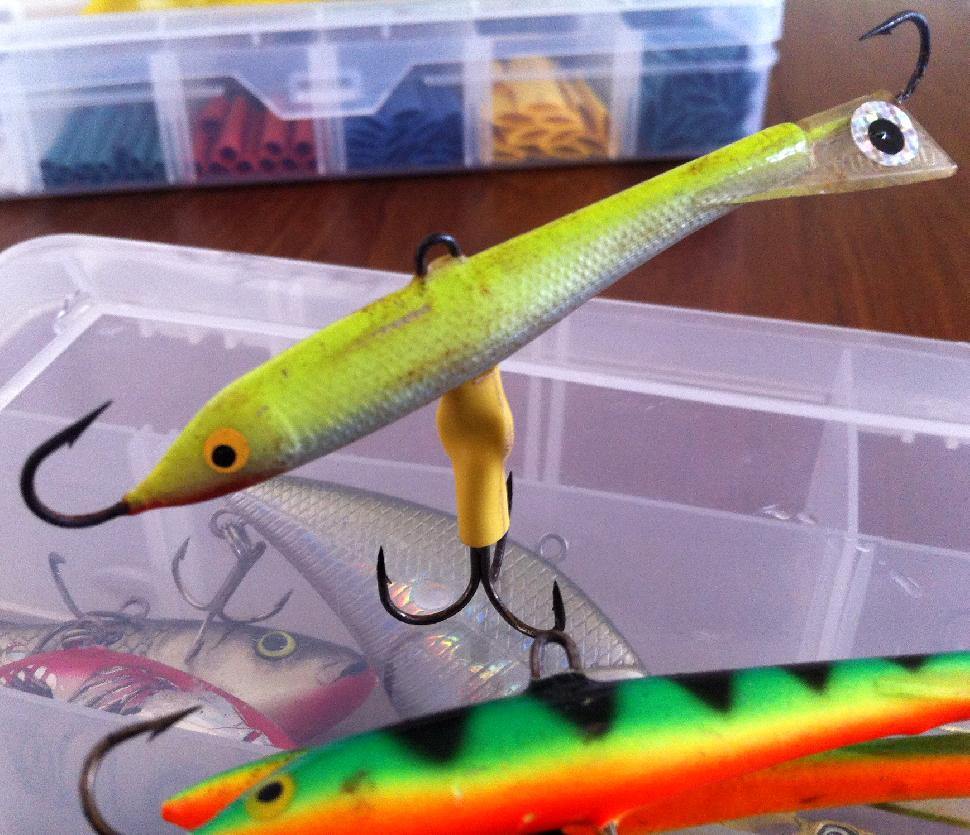 Like most anglers, I am a tinkerer at heart, rarely fishing with a new lure straight out of the package. To me, it seems like there is always something I have to modify, especially when I am fishing in the winter. I alter, tweak, and generally mess around with my lures more when I standing on hard water and fishing through a hole in the ice than any time in open water season.

Sometimes the changes involve major surgery, but more often than not they’re cosmetic operations. This includes tasks such as replacing the bronze and nickel hooks that come on most lures with premium, sharp, red Gamakatsu ones. It is a trick that has stayed with me for years, ever since the first time I fished with Kevin Van Dam on TableRockLake while I was working on a magazine assignment.  KVD opened up his tackle box and imagine my surprise when I saw that every one of his lures sported a red hook. Even his tube jigs were custom-poured around blood-red crimson hooks.

Kevin told me how he began experimenting by removing one of the two or three trebles on his crankbaits, replacing it with a red one. Seems no matter where he put the scarlet hook, he nabbed a disproportionate number of fish on it. In fact, when he placed the red hook at the front of the lure, the majority fish were hooked up front. When he placed it at the back, most were hooked near the tail. Ditto when he substituted it for the centre treble.

As a matter of fact, I’ve noticed over the years, that the more fish I catch on a lure sporting a red hook the better it produces. That is because the red coating eventually gets worn away by the fishes’ teeth and constant sharpening, until tiny hints of the yellow undercoating start showing through. Don’t ask me why, but in the manufacturing process, the base layer of colour underneath red hooks is yellow, not the bronze or nickel you might suspect.

Another winter trick I nearly always employ when I remove the treble hook from my jigging spoons (Williams Nipigon, Mepps Syclops, and now the new Mooselook Savant Winnie) and minnowbaits (Jigging Raps, Jigging Shad Raps, and Rapala Snap Raps) is to attach a Stringease Fast Ach Clip to the O-ring before I add on the red hook. It is an amazingly productive trick I developed years ago, and would still have it as a closely guarded secret had buddy Doug Stange not shamed me into divulging it.

I was hosting Doug and the In-Fisherman Ice Guide Television crew on Lake of the Woods one winter a few years back when we were filming an episode catching humongous jumbo yellow perch. Interestingly, I was out-fishing Doug by a margin of at least two perch to his one.

The reason was because I’d placed a Fast Ach Clip between my spoon and the hook, and before I reattached the treble to the clip, I ran the shank through the mouth of a minnow head so the eye of the hook exited the centre of the snipped-off head. When you do this, it is virtually impossible for a predator fish to swipe at your bait and not get hooked. The Fast Ach Clip also creates a pivot point, so your hook pendulums sideways into the fish’s mouth.

Anyway Doug knew full well that I wanted to keep it a secret, so the next time I reeled a husky perch up through my hole, he walked over to where I was fishing with the camera rolling and said, “Gord, that is a unique way that you’ve doctored your lure, why don’t you tell the folks what you’ve done and how you’ve rigged it?”

I am joking of course, but after the show aired, Bernard Yong-Set at Stringease Tackle told me he was swamped with telephone calls and emails and ended up shipping thousands of Fast Ach Clips all over the continent.

But the newest ice fishing wrinkle I am excited to try this winter is a trick I recently learned from Barrie, Ontario buddy JP Bushey, who spends his spare time chasing lake trout, walleye, northern pike, and panfish in Lake Simcoe, Georgian Bay, Lake Nipissing, and the French River.

JP is emphatic about using the larger size Jigging Raps, Jigging Shad Raps, and Rapala Snap Raps for pike in particular, but walleye and lake trout as well. He didn’t have to convince me on that score, as we’ve been ripping the same lures under the ice for pike for years.

But here is the thing: I always remove the bottom treble hook on my Jigging Raps when I am fishing for pike, having noticed that nearly every big northern I’ve ever caught over the years has been hooked on either the front or back single hook. Plus, every once in a while when you’re jigging the lures aggressively, the centre belly treble swings and snags on your line.

Rather than removing the bottom hook, however, JP, who is a fanatical muskie nut during the open water season, goes the opposite route and increases it in size.

But here is the secret: Before putting the hook back on the wire clip on the bottom of the lure, he adds a stout O-ring and encloses the shank of the hook, the O-ring and the clip in a 3/4-inch to 1-inch piece of heat shrink tubing colour coordinated to match the lure. Then he warms it up with a hair drier, hot air gun, or lighter until it shrinks and compresses the terminal tackle, making it rigid.

“I can make the jig actually stand up, almost like its on a tripod,” he says. “As long as you wiggle the tubing over the hook eye, split ring and belly wire loop, it will add just enough flex so that the hook is basically locked into that lower, hooking position. There is plenty of play to keep fish hooked, but the belly hook will now stay in ready position and never foul, no matter how aggressively you stroke the lure.”

Look carefully at this photo of JP’s compulsive “luresmithing” and you’ll see he goes a step further, as well, adding stick-on-eyes to the clear plastic tail on the bait.

It is all brilliant thinking that enhances the attractiveness of the lure and negates any chance of the bottom hook tangling in your line. And according to JP, when you separate the hook, albeit by only a fraction of an inch from the mass of the metal body, it is enough to increase your hooking percentage exponentially.