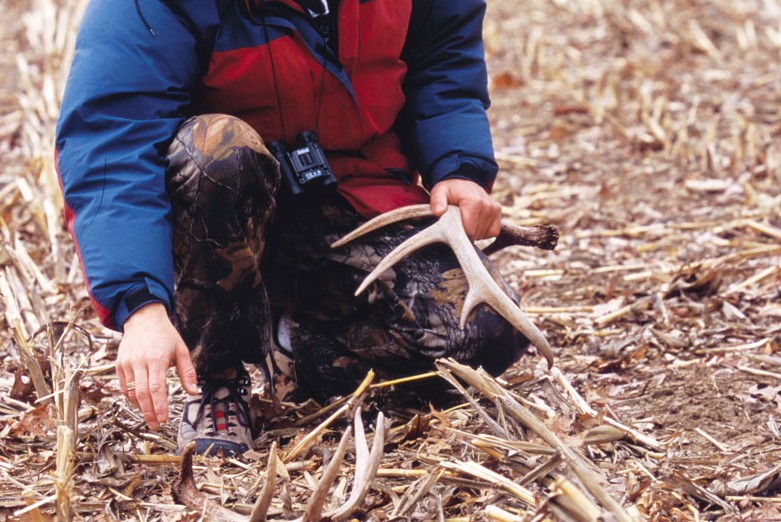 How to hunt for shed antlers

Stepping from the warm confines of my truck, I began to question my sanity. I could be home in front of a toasty fire and the TV, I thought. But no, here I was again, looking for the big eight-pointer I’d lost so much sleep over during the past two years. The gusting north wind blasted cold air down my collar as I trudged across the cut cornfield on my way to what I believed was the big buck’s sanctuary, a brush-choked ravine. It would be warmer down there, sheltered from the cold wind, so I hurried as fast as I could.

Dropping into the ravine, I did my best to avoid the patches of crusty snow on the south slope, hoping the moaning wind above me would cover any careless sounds I made. Despite my best efforts, though, two deer busted me and bounded up the north slope and into the fields beyond. Deer sign was everywhere, and deeply cut trails led up and down both sides of the ravine heading for the corn. He had to be there.

My eyes were watering from the cold as I scanned the ravine ahead of me with my binoculars. I would look, move a few steps, then look some more. Suddenly, the binos were filled with movement. Deer! A group of them was moving up the ravine toward me. In the lead was a buck I’d seen many times before. His snow-white, six-point basket rack was a familiar sight. Behind him was another buck, a half-rack four-pointer. Trailing 20 yards behind them, two more deer—big deer—cautiously watched the smaller bucks ahead for signs of danger. Sensing none, they came closer. There was no mistaking the last one. It was him. And, much to my delight, he had dropped his rack. The hunt was on!

Shed hunt, that is.

As a certified whitetail junkie, bowhunting three months of the year is just not enough. By the end of January, I find myself going through hunting withdrawal and the only fix is a trip afield in search of shed antlers. Big or small, I love them all, for shed antlers are as valuable to a deer hunter as a rare coin is to a coin collector. And like snowflakes, no two are alike.

When I first started shed hunting, my success at finding numbers of sheds was dismal, to say the least. I spent much of my time in unproductive areas, or didn’t search thoroughly enough when in the right places. Now, though, I commonly find multiple sheds on every outing—it’s just a matter of knowing when, where and how to look.

Actually, my hunt for shed antlers begins shortly after hunting season ends, even though very few animals have lost their antlers at that time. Why? Well, in order to find sheds, you must first figure out where the animals spend the majority of the winter. In southern Ontario, for example, agricultural fields adjacent to heavy cover can be whitetail magnets in the winter (especially if there are leftover food crops). Look for fields of either cut or standing corn, winter wheat or fall canola. Concentrate particularly on the cornfields if they’re close to heavy cover.

In many cases, finding good whitetail hangouts at this time of year is as simple as driving through farm country in the late afternoon or early evening, as that’s when many deer actively feed in prime fields. However, there will be times, and areas, that’ll require a bit of footwork in order to locate the best food sources. The good thing is, you’ll have no doubt when you find a hot spot because the area will be literally torn up with deer sign.

If there’s snow on the ground, it will help reveal everything you need to know in terms of travel routes to and from the food source; these travel routes generally lead to bedding areas in thick cover. A word of caution: if you have your sights set on finding sheds from a big buck, don’t put pressure on him by invading his bedding area until you know for sure that he’s lost his rack. If you bump a big deer from his bed, even at this time of year, he may vacate the area if he feels threatened.

All the same, if there’s the threat of someone else shed hunting the same area, you’ll want to be in there first. The good news is that the largest bucks are often the first to drop their antlers. So, by keeping close tabs on a food source and watching feeding deer on a regular basis-all from a distance—you’ll know when a particular deer sheds.

By far, the best time to shed hunt is after the snow has melted, but before green up occurs. In many parts of the country, that’s the only time because of deep snow and the difficulty of getting into a productive area. Still, as with many outdoor pursuits, the best time is whenever conditions allow, even if there’s still snow on the ground.

The best matched pair of sheds I’ve ever found were from that elusive eight-pointer. I found them lying side by side on the last day of January 2003. Only three evenings earlier, I had watched the big buck through my binos as he jumped the fence and entered the field 200 yards away. He still had his rack. Then the night before I found the sheds, I saw him jump the same fence at the same spot-without his rack. Guess where I found the sheds? They were lying in the snow at the exact spot he jumped the fence. With a 20-inch inside spread, they grossed more than 150 inches. The funny thing was, none of the other bucks in the group lost their racks for another three weeks, and a few of the smaller bucks even kept their headgear until mid-March.

In short, you can start shed hunting as soon as you know that a particular animal has dropped its antlers, or you can wait until late winter or early spring. Personally, I love to spend time outdoors in the winter, so you’ll often find me in the field any time between late January and March.

There are many products on the market today designed to imitate the sounds of two bucks in battle. Every year, hopeful hunters buy the likes of matched synthetic antlers, rattle bags and boxes—even electronic devices. I’ve tried many of them, and although they work, they don’t compare to the real thing.

I’ve been using the same set of shed antlers for rattling since 1996. The matched set has called in a fair share of animals during the rut, and I wouldn’t be caught dead in the woods without them from late October through November.

As good as my set is, however, the 130-inch rack was a pain to carry in the field—until I modified it. By simply sawing an inch or two here and there, the two halves now fit inside my hunting pack, with plenty of space to spare for other essential items. I also attached a light, 18-inch piece of rope through holes drilled in the base of each shed. This makes hanging them within reach an easy task when hunting from a treestand.

And remember, the best sheds for rattling are those that haven’t sat on the ground for more than a few months. Those that have tend to deteriorate and lose the tone that’s so important to consistently rattling in bucks. Likewise, it’s a good idea to always store your sheds indoors so the elements don’t damage them. That’s why my rattling sheds sound as great now as they did nine years ago when I first used them.

The first place you need to look for sheds is in the food source itself. Fields of winter wheat or fall canola are probably the easiest places to find sheds. Cornfields, while often the most rewarding, are also the hardest because the stalks camouflage the sheds so well. You often can’t spot them until you’re standing right over them.

Regardless of the food source, you’ll get the best results by using a good set of binoculars. Not only will they help you spot sheds, they’ll save you a lot of walking. Even in wheat fields, there’ll be a lot of weed stalks and remnants of previous crops that look like antlers from a distance. Binoculars can help confirm whether you’re looking at the real thing. Polarized glasses are also a good idea, especially on sunny days.

In wheat or canola fields, start your search in one corner of the field and scan the area ahead of you with, and without, your binos. If you don’t spot anything, walk forward 50 yards and repeat the scan. On sunny days, be sure to do this with the sun at your back as much as possible. Even with snow on the ground, an antler can have a distinct glare when the sun shines on it. Grey, wet days are probably the most productive because the rain puts a sheen on the antlers, making them visible from a distance.

In this stop-and-go manner, walk the entire length of the field. When you reach the end, walk 50 yards along the edge of the field and head back to the other side, repeating the whole process. In essence, you’re doing a grid search. It’s the most systematic way of covering the whole field and, believe me, you’ll find a lot more sheds doing this than you would searching haphazardly.

In the case of cornfields, you have to really slow down and look as much with your naked eyes as with your binoculars. Begin in one corner of the field and move down the rows, scanning between each one, again, with and without your binoculars. Once you reach the end of the field, move across 20 yards, turn around and repeat. It’s slow going, but to be thorough, it’s the only option. Even when doing a grid search such as this, you’ll miss some sheds, or even step on them before noticing them. Still, I’ve searched cornfields in this manner several times and have always managed to find sheds.

Once you’ve thoroughly scoured the food sources, it’s time to move off the fields into the heavy cover and bedding areas. Start by following all trails that lead away from the fields. Pay particular attention to places where deer have to jump fences, as the sudden jolt when landing can cause antlers to drop on the spot.

Most trails that lead from the fields will be easy to follow, and you’ll often find sheds on them. However, the best areas in the cover are where the paths become less distinct. An obvious trail that suddenly fades to almost nothing means you’re entering a bedding area. Begin your grid search there, for if it’s a buck bedding area, you’re bound to find sheds.

Late last March, for example, I entered just such an area for the very first time and was totally amazed at what I found. After 10 minutes of searching, I discovered a shed that later measured 71 inches. Ten feet from that one was a slightly chewed antler from the same side from the previous year. In my search for its mate, I found four other sheds from mature animals within 75 yards of the first one. It was a big-buck honey hole. The only sad part is that it’s in an area where hunting isn’t allowed. Oh well, you can’t win them all.

Whether you collect sheds, use them for rattling or hunt for them as a means of scouting for big bucks, there’s something special about picking up an antler from the forest floor—and knowing you’re the first person to have ever held it in his hands.