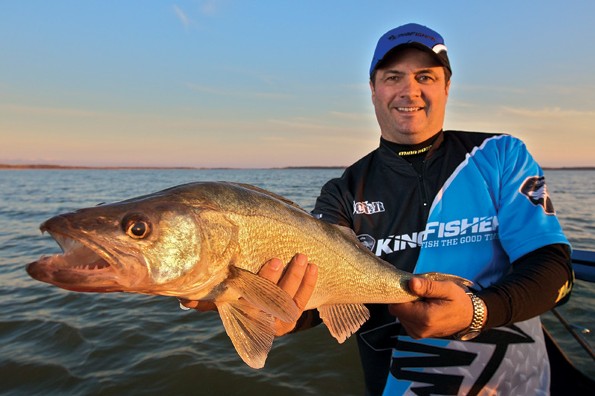 Canadian anglers are among the best in the world when it comes to catching walleye, and John Butts is at the head of the class. The personable pro from Dryden, Ontario, is only the second Canadian ever to win at the elite Professional Walleye Trail level. And his ability to devise new ways to catch walleye shocks even the battle-hardened specialists he competes with.

“I am not overly thrilled to share this one, but I’ve told enough friends that it’s already out there,” Butts says of this secret early-season tactic. From opening day until the water heats up in mid- to late June, he looks for small, shallow creeks connecting two lakes, knee-deep channels between sections of a lake, and even shallow backwater areas off the main lake that are only two to four feet deep. “Most anglers have no idea walleyes are using these areas,” he says.

To catch them, Butts trolls weightless spinner rigs 40 to 50 feet behind his boat. He makes his own rigs by putting either a #2 or #3 silver Indiana blade ahead of six beads (two chartreuse and four orange), followed by either a #2 or #4 Tru-Turn hook, which has a little more length to the shank to separate the minnow from the beads and blade. “I always lip hook the minnows so they track perfectly straight,” he adds. “If you put the hook in their mouth, out the gills and then back through the body in the traditional manner, they roll sideways.”

The details abound. Butts never holds the 8 1/2- to 10-foot rods he trolls with, for example, finding that he catches more fish when he puts the rods into holders. And a small kicker motor—not an electric—is essential for pushing the boat along at the required one-mile-per-hour speed. He believes the noise of the motor also serves to flush fish out of any four- to five-foot-deep holes.

“When I first developed the technique and saw another boat come by, I’d turn off the kicker and act as if I was casually eating lunch,” says Butts, who is the Central North America business manager for KingFisher boats. “Once the boat was out of sight, I’d go back to catching fish. As a general rule, you’ll catch three walleye trolling this way compared to every one you’ll catch jigging. And it is a big-fish technique too, not just a numbers game.”