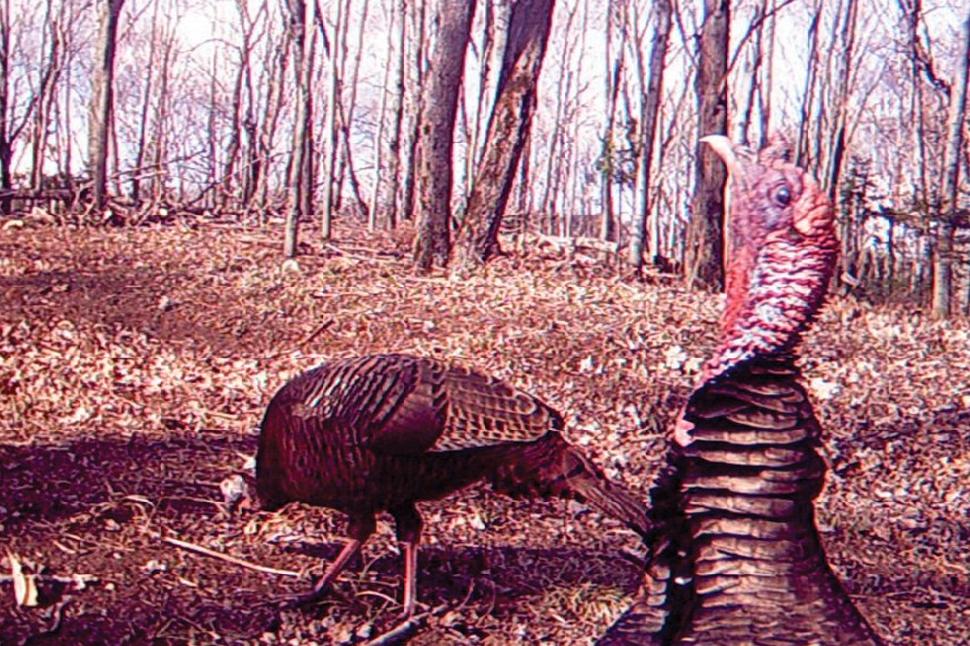 Making a strut zone for toms

If you want to see more gobblers in the places you hunt, give them a reason to be there: create a strut zone. I cleared one on my property last January and took a long-spurred tom just one hour into the spring season.

Most toms visit a series of different strut zones each day of the breeding season if they’re left undisturbed—put a new zone in your turkey woods, and they just might add it to their circuit. And that includes those annoying birds that strut in fields or on property you can’t hunt.

When to make it

To clear a strut zone, you’re going to need a chainsaw and more than a few days for all the brush clearing, tree cutting and stacking of the resulting cordwood. That’s going to create quite a disturbance, so all the work should be completed before the end of February, when the turkeys are still flocked up within a small range close to a prime food source. That way, you won’t scare them away from your newly created strut zone once the warmer, longer days of March get the flocks moving around more.

As a bonus, hungry deer will benefit from eating the branch tips and buds from the trees you cut down during the winter. In my case, my chainsaw served as a dinner bell for the local whitetails-thanks to my trail cam, I knew they were chowing down on the freshly cut foliage soon after I’d snowshoed back over the ridge to my house.

Where to make it

A strut zone is not just a clearing-it’s a clearing in the right place. When looking for a good site, keep in mind that a tom wants to be seen, yet still needs to feel safe. When he struts, his goal is to be eye candy for the ladies. But he also wants to avoid the predators he’ll attract by gobbling his innards out. He therefore needs a clearing that allows the feathered babes to see him, while letting him watch for approaching danger.

Look for a ridge or hilltop, a level bench on a hillside, a hummock in a swamp, a riverside flood plain or any other land formation adjacent to mature forest from which a gobbler can see at least 50 metres in any direction. If you know where turkeys roost but can’t hunt there because you don’t have access, choose an appropriate site as closely as you can to the roost.

If you’ll be hunting mainly in the morning, meanwhile, consider a spot with an eastern exposure for the early sun. And don’t make a strut zone within sight of a road or well-used trail, or other hunters may see your tom strutting and take your spot. Ideally, you’ll want to clear a 30-metre area.

How to clear it

If you hunt on someone else’s land, ask for permission before clearing a strut zone. Only remove trees that have no value as lumber because they’re the wrong species, diseased or crooked, or they’re crowding other more valuable timber. As well, don’t cut down trees that produce fruit or hard mast such as acorns and beechnuts, which are high-quality foods for wildlife. Once the cutting is complete, the nearby remaining trees will flourish thanks to less competition for sunlight, water and soil nutrients.

You also need to cut down all saplings and remove the understorey brush. Not only will this clear the way for a tom’s love dance, it will also remove hiding places for predators. Pile the brush and treetop branches off to one side of the clearing, then cut up the trunks for cordwood and stack the pieces neatly for removal.

If you can’t get the firewood out before turkey season begins, don’t worry—I couldn’t either, but my neat piles of cordwood didn’t spook the birds. Just be sure to give the dude with the snood a clean dance floor on which to strut, fan and fight challengers.

How to activate it

When turkeys begin moving around more in March, they may discover your clearing on their own. Hens are attracted to such openings because they’re safe places to scratch and peck for food. If they find your strut zone, it’s a bonus, as they may adopt it as a feeding area for years to come—and attract toms every breeding season in the process. In fact, some strut zones are really just hen feeding areas.

Look for turkey scratchings, droppings and feathers, or set up a trail camera soon after the snow is gone to see if turkeys are using your clearing. If there are no signs, don’t lose heart. Rather, it’s time to advertise your prime patch of turkey real estate with some calling.

Go there several times a week in late March and early April with a loud friction call and rip off several strings of yelps, mixed in with some excited cutting. Call loud and long so the toms can get a lock on your location. Friction calls carry farthest through the woods; a boat paddle box is the loudest. Really wail on your call, because the closet turkeys may be some distance away. Toms or hens that hear you should eventually get around to investigating-and find your clearing.

After calling, don’t hang around to see what shows up. The last thing you want is to spook the birds or bust them near your strut zone. To regularly return to a particular spot, turkeys need to feel safe there. If you get a nearby gobble when you call, keep a straight face so he won’t see your beaming grin, then slip away as quietly as you can. You can be confident that a tom now knows about your spot, so leave it alone until opening day.

How to hunt it

When opening day finally arrives, you may be tempted to set up right in the strut zone you’ve created. Bad idea, especially if a tom has already been strutting there. The reason ol’ scaly legs goes to your zone is because the visibility is so good-he’ll be able to pick you off as something out of place no matter how good your camo is. And when that happens, he’ll scram.

The same goes if he comes in from behind your set-up and you don’t get a shot, or you miss your shot, and you spook him in the very spot you want him to feel safe. One possible exception is to use a pop-up blind if you can put it in place without being detected a couple of weeks before the season begins.

If you know where a tom roosts, it’s best to set up between there and your strut zone. If you don’t know the exact route he follows back and forth, use the lay of the land to pick a spot roughly 100 metres from the strut zone that allows him easy walking-but no view of your position until he steps into gun or bow range.

Start calling with casual, disinterested clucks and purrs to bring him in. If you yelp too much, he may go straight to the strut zone and wait for the hot hen to meet him there, which is the normal drill. Indeed, if turkeys really like your strut zone, you could become a victim of your own success by creating a henned-up tom situation. It’s hard to call a tom away from real hens in a strut zone, but I’d rather have that than no tom at all.

You can easily transform your strut zone into a nutrient-rich summer and fall food plot for turkey hens and poults by planting clover. Poults, in particular, need bugs by the bushel for protein to fuel their rapid growth, and clover patches are rich in insects. Grouse and deer will also benefit from the additional food source.

To plant clover on your strut zone, remove all weeds, grasses and dead leaves to expose the soil, then break up the surface with a rototiller, diamond harrow or rake. For the acidic soil of the Canadian Shield, mix in pelletized lime (200 pounds per acre) up to a year before planting.

In mid- to late May, use a hand spreader to disperse a mixture of red clover and Dutch white clover seed (eight pounds per acre) across your strut zone. Make sure the seed is mixed into the soil about a quarter-inch deep, then apply 10-10-10 fertilizer. Now, the next time you carry a gobbler out of the woods, you’ll know you’ve also put something back.