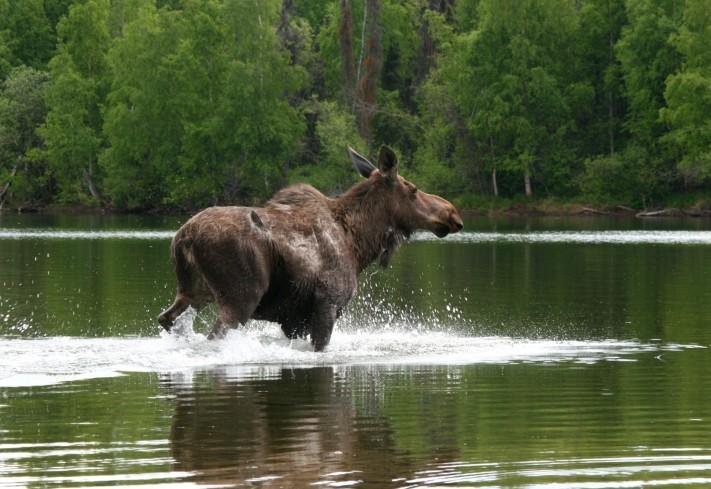 If it's all about the meat, why pass up a cow moose?

Ask most moose hunters what drives them to pursue the largest member of the deer family and chances are they’ll tell you it’s about the meat. And why not? A single moose can fill up a couple of freezers in one fell swoop. That goes for cows as well as bulls, but it seems hunters are always far more interested in the big guys.

Now, I understand completely the thrill of hunting bulls during the rut. If there’s a more exciting hunting experience than calling a randy old patriarch into tickling range, I surely don’t know about it. Few of us, however, have the extra wall space and dollars to consider taking our cape and antlers to the taxidermist for the full treatment. If the meat is truly at the heart of moose hunting, give me a cow or a calf any day.

Perhaps bulls get all the attention because many hunters are of the notion that hunting cows is no different from hunting bulls—that one will be found in the same place, using the same strategies, as the other. This simply isn’t the case, and we need look no further than the biology books to learn there are definitely some differences between how the sexes behave and where they’re most likely to be found. Incorporate this understanding into your hunting methods and it can pay real dividends.

As the summer draws to a close, bulls are frequently found in open areas where food is most plentiful, striving to grow the largest bodies and antlers possible for the coming rut. Their long legs and sheer size give them a two-pronged defence against predators, so being exposed poses minimal danger.

Cows, on the other hand, want security for their vulnerable calves, so they’re most often found in the protective cover of the forest, willing to feed on whatever is available nearby. By sacrificing additional nutrition for safety at this time of year, a cow also ensures that her next calf will not be too large, which can put both of their lives at risk during the birthing process.

Early-season hunters can use this behaviour to their advantage by focusing on locations with dense forested cover and avoiding areas where natural predators such as wolves and cougars, both of which prefer the paths of least resistance, are likely to travel. This means staying off trails, roads, cutlines, ridge tops, creek banks and the like. In short, get into the thick of the forest to hunt.

In particular, look for areas with a mix of deciduous and coniferous trees. While deciduous trees provide forage, conifers offer thermal cover, where moose can bed down and find cooler air during the warm days of late summer and early autumn. Hidden springs, beaver ponds, natural wetlands and creeks within the cover of a dense forest round out the resources for a cow and her calf.

Examine aerial photos and topo maps to help find these otherwise undetected oases, which can provide ideal locations for treestand hunters. Set up your stand on the downwind side of any spot that shows evidence of recent, and regular, moose activity. At this time of year, cows seldom move far if they believe they’re safe from predators, so opportunities should arise.

If you prefer to still-hunt, the challenges of getting into these areas undetected can be daunting, as moose have near-supernatural hearing. Making your way over a carpet of twigs, leaves and deadfall can’t help but generate noise. To improve your likelihood of success, head out when it’s unusually windy or there’s a steady rain, both of which impair a moose’s sense of hearing.

As mid-September and the onset of the rut approaches, bulls and cows alike change their behaviour. Bulls begin to show interest in each other and spar, thrash shrubs and full-on fight as they assert dominance. They also begin to wander about in search of cows, with dominant bulls covering large areas and leaving scent markers as they go. Bulls create these markers by pawing the ground and urinating into the resulting scrape; then they splash about in the pits, spraying urine-soaked mud onto their bells, necks and antlers.

Cows, meanwhile, contrary to how the females of other antlered game behave, assume an active and independent role during the rut, often becoming highly aggressive toward other cows. Depending on the local moose population densities and where they’ve summered, cows can also become very mobile as they seek a prospective mate, making them more apt to expose themselves than at any other time of year. And as everyone who’s hunted bulls in rut knows, cows become quite vocal as they signal their receptiveness to potential suitors.

Female moose are significantly stimulated by the scent of a rutting bull, and may actually fight other cows for the right to lower themselves into a rutting scrape. The bull’s scent helps advance estrus in the cow, as well as build a bond between the two animals. Once coupled, though, they will remain together for only a few days before the bull leaves in search of additional mates.

During the heat of the rut, hunters should look for bulls and cows sharing the same habitat. This is typically more open terrain, as dense forest can prevent them from finding one another. If you discover a rutting pit—you’ll know it, as the odour will be quite strong—that’s the place to set up a ground blind or treestand, as cows that have yet to be successfully bred are drawn to scrapes in search of a mate.

For spot-and-stalk hunting, prime locations include logging clearcuts, burned- over areas, road edges, creek edges and the shores of ponds and lakes. Take your time to carefully glass the edges. Moose will often loiter in the cool of the forest edge, fully exposing themselves only in the shoulder hours as they emerge to feed on the shrubs that dominate these edge habitats. If you find fresh moose sign, be patient and get settled in downwind such that you can see the greatest expanse of territory.

Floating rivers is also a productive tactic for pursuing antlerless moose during the rut. Similar to hunting other edge habitat with openings, you can cover a considerable amount of shoreline in a relatively short period of time. Listen carefully as you float, as it’s not unusual to hear the call of a cow as she searches for a mate.

Once the rut is completed, bulls seek quiet and secure surroundings in which to recover their strength and heal any wounds they might have incurred. They also need to replenish their depleted body fat, so they move into secluded areas offering highly nutritional feed. Willow or alder flats, burns and clearcuts are likely locations. Bulls often form fraternal groups at this time of year, so finding several males together in an area of prime feed is not unusual—they seem to quickly forget their differences once there are no cows to impress.

After they’ve mated, meanwhile, cows will return to their solitary ways, accompanied only by their calves. Again they’ll seek the safety of dense forested cover, and again forgo the best feeding sites for the security of the calves. Throughout the winter, in fact, cows will continue to deplete the fat reserves they built up during the summer.

As November dawns, snow falls across much of Canada’s moose habitat. This is when still-hunting is the preferred option. Get yourself away from the main roads and easily accessed forested habitat that attracts the majority of hunters, and start putting some miles on your boots, searching for tracks as you go.

Cows are once again living in relatively small areas, making them readily tracked with a little perseverance if they’re undisturbed. Wear quiet clothing and regularly watch your back trail. Moose are notorious for hooking back parallel, downwind and above their track before bedding in an effort to spot potential predators on their trail. It’s not unusual when tracking a cow to look over your shoulder and see her cautiously watching you stroll past.

Unlike whitetails, moose don’t normally flee at the first sight of an intruder, so if you do see a cow or calf, take a moment to find a good rest and ensure a true shot, making casual movements only. If you suddenly become furtive and switch into stalking mode, the cow is apt to assume you’re a predator and hightail it out of there.

Moose are the true monarchs of our forests, and a cow or calf is every bit the hunter’s trophy that a bull is. Whether you’re after an antlered or antlerless animal, every moose hunt offers a challenging experience, great fun, lasting memories and, when you’re successful, great eating for many months to follow.

Some provinces offer separate tags for cows and calves, while others offer an antlerless tag, meaning either a cow or a calf is eligible. Where the option exists, I recommend always selecting the calf. While you’ll be sacrificing a few pounds of meat, you’ll generally be trading up for more tender cuts. More importantly, you’ll also be protecting a proven breeder, helping ensure the sustainability of the local moose population. A rancher takes his calves to market each fall, not his cows, for the same reason.

Go for a drive:

One hunting strategy that can pay big dividends with cow moose, particularly in the pre- and post-rut periods, is to organize a push, or drive. Drives require a good understanding of where a cow is holed up and, just as importantly, where she’s likely to go if pushed—there must be an opening of some kind to push her into, or across, if you want to have a reasonable chance of success. Unlike pushing for deer, the tactic often proves fruitless if you first don’t know where the cow is located. But once a moose is up and moving, it’s unlikely to double back through the line of pushers, relying on its long legs, rather than stealth, to carry it to safety. As such, pushed moose are relatively predictable.