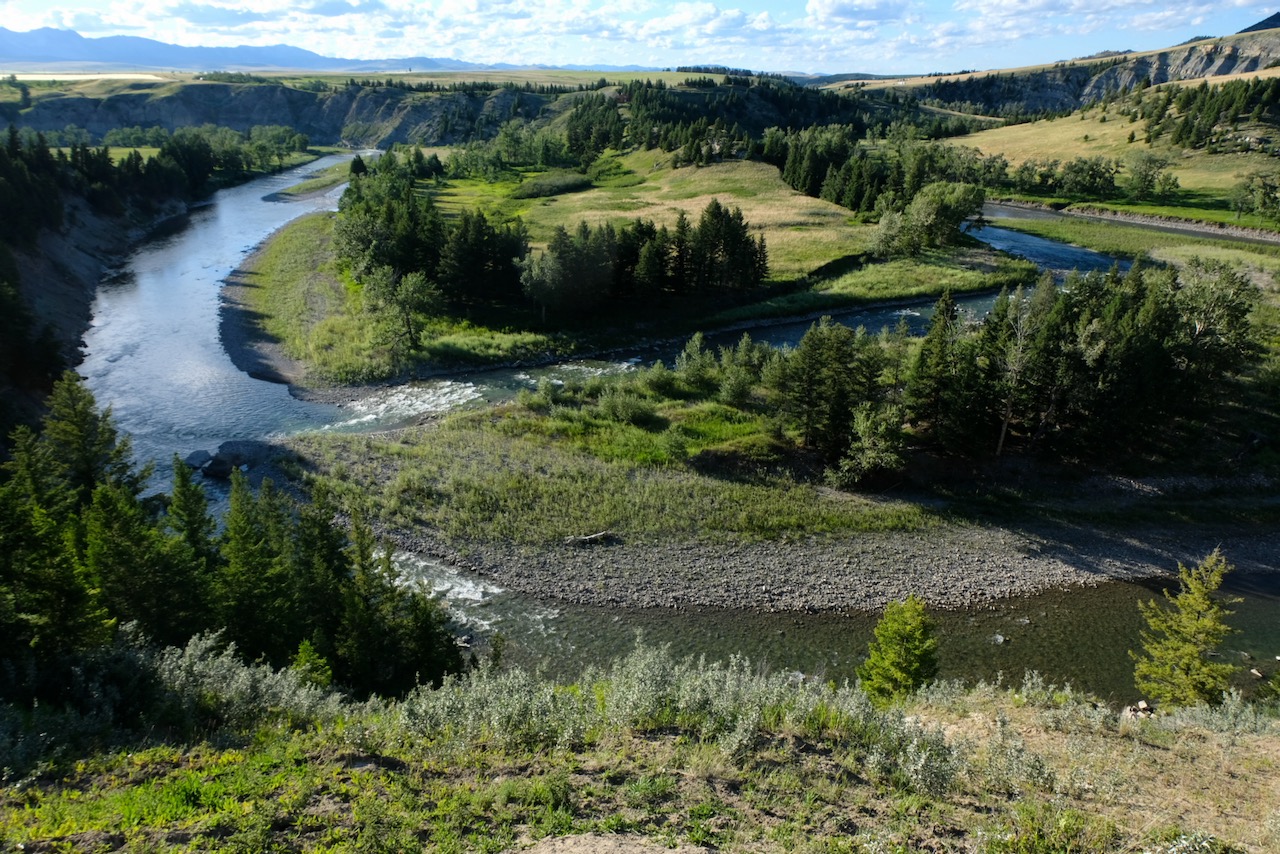 Sometimes in July, but more often in August, the river runs too low and the day is too hot. When the water becomes comfortable enough for sitting in it, you know it’s too warm for trout. They can barely cope; they were made for cold water. On days like that, it’s just not right to go fishing. That’s unfortunate, in a way, because when the shadows lengthen across the river at the end of a long, hot summer day, there are often swarms of insects over the water, and the rings of rising trout drifting lazily down the clear, quiet runs. If you were to fish, it would be good fishing. But some of us choose to put respect for the trout first.

Even so, to borrow a phrase from Roderick Haig-Brown, one still needs an excuse to be near a river. And so on this evening, as on other such evenings before, I fill a glass with ice cubes, flavour it with a dash of Irish whisky, and take my folding chair down into the river. My excuse is that you should never drink alone, that you need the company of a good friend.

The river changes each year, especially after big spring floods. But the cliff run has persisted for a few years now. It’s a deepening of the channel at the bottom of a long, sleepy reach, where the river leans in toward a steep sandstone cliff. Here, the river emerges from a canyon, and the cliff peters out just above the beginning of a cottonwood flat. At the tail of the cliff run, the smooth surface of the river breaks into a chatter of wavelets, then the clamour of chop and standing waves as it drops through a riffle into a long rapid. At the next corner, it eddies hard against another cliff and becomes what we know as “Brian’s Pool,” because of a fish our youngest son once caught there.

The river changes each year, especially after big spring floods

I work the legs of my folding chair into the cobbles of the riffle below the cliff run and carefully settle myself into the seat until I’m sure it won’t dump me into the stream. The cool water wraps around my legs, tugging and ebbing as the current sweeps past, and almost immediately I am immersed in a dance of swallows. High overhead, there are cliff swallows, while bank swallows sweep closer, dancing in and out from behind the Douglas fir canopy to chase the little green caddisflies and bigger mayflies hatching out of the river. The caddisflies are emerging from the riffle in which I’m sitting, but the mayflies appear to originate in the quieter upstream run. They float, sailboat-like, before lifting themselves into a diagonal, fluttering flight that takes them higher and higher, out of the shadows and into the last slanting rays of sunlight.

The placement of my chair is more luck than good planning, because the hatching insects are most abundant where I sit. Now the bank swallows are joined by rough-winged swallows, which are swifter and more deliberate, hunting low over the water and sometimes snagging mayflies off the surface. Their wings whisper past my head as they spin and wheel around me. Each time they pluck up a floating fly, they leave a set of concentric rings drifting swiftly downstream on the water’s surface. 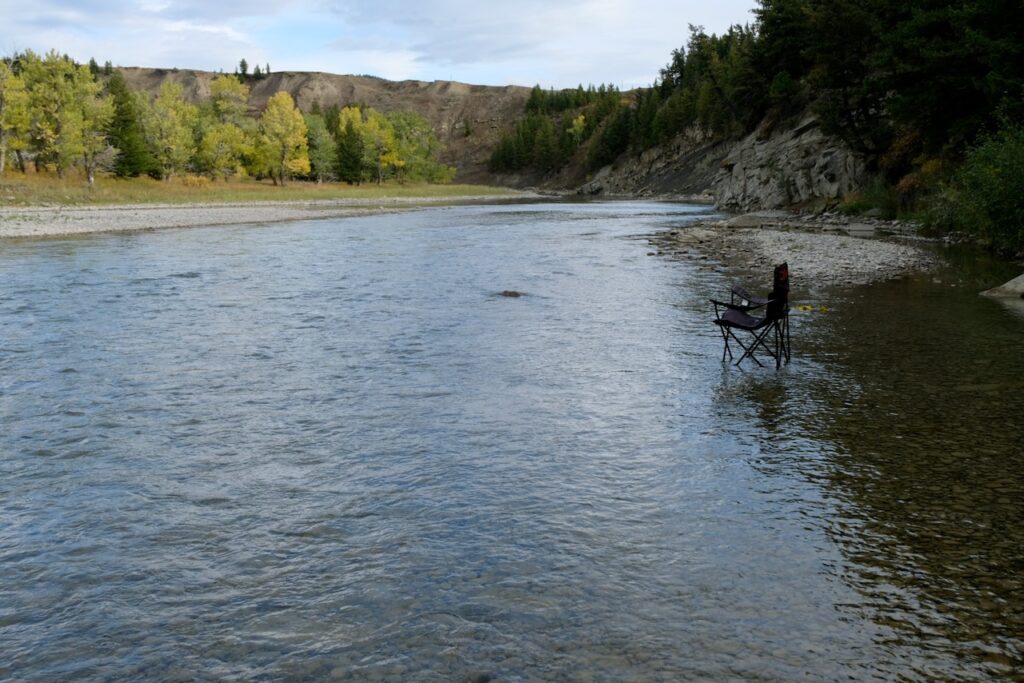 Five or six metres upstream from where I sit, similar rings emerge—seemingly all on their own—where the last V-shape of smooth water streams between the first of the larger cobbles that end the cliff run. Making the rings is a rising rainbow trout, whose acquaintance I made briefly last week before it threw the hook. It’s a small trout, perhaps 10 inches long, like most of the cliff run’s denizens. The bigger fish mostly live upstream at the big rock, or down in Brian’s Pool. In June, however, they move down into the bumpy water where the big, orange stoneflies are hatching. From where I sit this evening, in fact, I can see the skeletal remains of dozens of stonefly nymphs, left where they climbed onto the cobbles, split their shells and emerged as clumsy adults to flutter off into the willows.

That hatch was weeks ago, however. Tonight, it is mayflies—big pale ones—that are bringing the trout to the surface at the tail of each pool and run. Those that manage to evade the rising trout flutter aloft, their bodies tilted vertically, offering a silent answer to why some people believe in fairies. Watched from a few metres away, they might very well be tiny people with gauze wings, dancing daintily into the sunlight from the secret shadows above the river. If I were to pour another glass of whisky, it might eliminate all doubt of that, but I don’t. This one has to last the evening.

There are doubtless many mayflies emerging upstream, too, but the ones drifting past on the water’s surface or dancing overhead are almost the last before my river slows and eddies into an irrigation reservoir. The reservoir is 30 years old. I spent two intense years working with others to stop the dam from stilling the river. We lost. There was a perverse sort of irony in the fact that, a few years later, my wife and I would use our savings and the earnings from my first books to buy property barely a couple of kilometres upstream from the slack water of a reservoir I still despise. But we did, and it was a good decision. The river is still a river here.

Still, it is a changing river. The dam abruptly elevated the river’s baseline, and that promptly started building a new upstream profile. With its flow, and hence its power, stalled behind the dam, the river began to deposit the gravel and cobbles it once carried downstream during each spring flood. For three decades now, it has been building a delta, because that’s what rivers do when they have to deposit the sediments they carry. That delta effect now extends several kilometres upstream. As a result, our property line is defined by a river whose bed is now well more than a metre higher in elevation than it was when we bought the property. 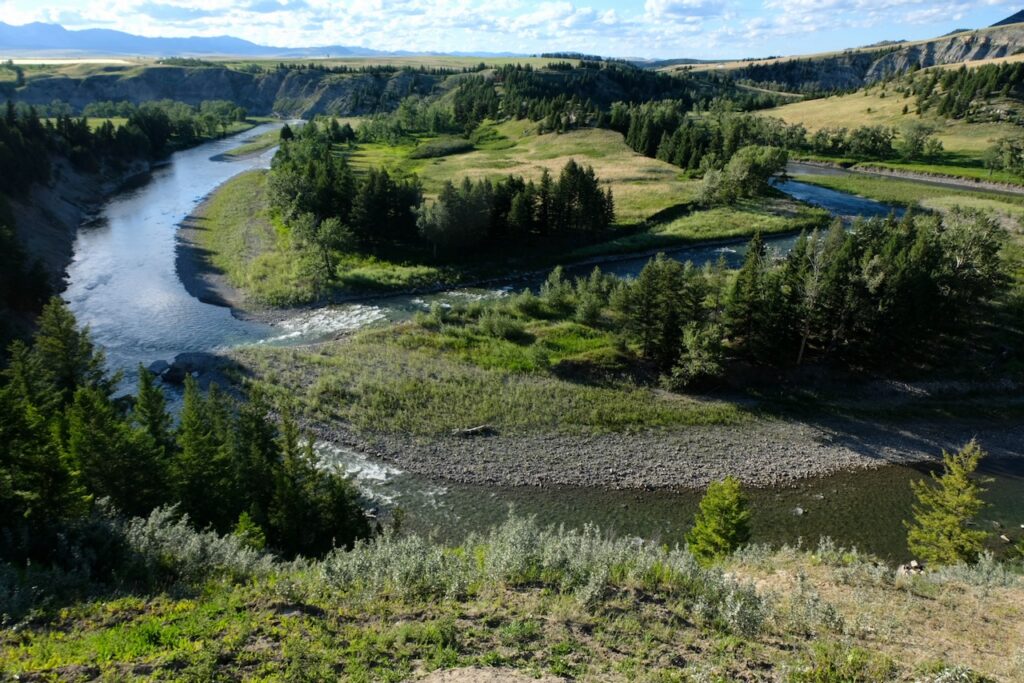 When a river can’t continue to use its energy to carry sediment or to deepen its bed, the only place that energy can be expended is laterally, which is why our river has also been steadily widening since the reservoir was filled. It now sits a metre higher and extends several metres wider than it did before the plug went in a few kilometres downstream.

That’s one reason it’s a new river each spring. Heavy flows undermine the canyon edges upstream and downstream from us, bringing hundreds of tonnes of rock and clay into the stream each year as the banks above slough off, weakened from below. The river has a lot of raw material to build new bars and islands, fill in the long runs and otherwise deposit onto the floodplain.

As the canyon walls collapse, long-established stands of Douglas fir and limber pine shrink, the trees following their soil into the river or tilting drunkenly from the lips of new erosion scars. Above the cliff run, a dead fir still hangs precariously beside still-living trees that are also close to losing their battle with the law of gravity. Cedar waxwings and eastern kingbirds perch there while I sip my drink at the edge of the shadowed riffle below. From those perches, they can see the mayflies pop to the surface, float briefly, then rise laboriously toward the sunlight. The kingbirds make short forays from their perches to grab a fly or two before returning to another branch to eat. The waxwings have a somewhat more manic approach, chasing several flies in a row in a series of zigs and zags. Finally, they’ll return to sit demurely in the evening glow before launching into another ping-pong foray over the river.

The trout rising, the swallows dipping and diving, the kingbirds and waxwings darting from their perches, the current lapping at my legs—it’s as though time were suspended amid the chatter of the passing river and the age-old dance of hatching insects and the creatures who subsist on them.

I spent two intense years working with others to stop the dam from stilling the river. We lost

The last light is now on the curing grass and silver-leaved cottonwoods across the channel. Past the canyon rim, a thunderhead is rising into the pale evening sky, billowing ever higher above the Porcupine Hills. And below it, just where the cliffs give way to forested bluffs near the mouth of a coulee, there’s the gleam of dancing water as the river comes tumbling around the corner. Here, the current bears all the stories of far-off valleys and the creeks that are born there. It melds the water of those creeks with minerals drawn from the canyon walls, the warmth of the summer sun, the scent of the canyon and the fairy magic of water insects that feed this fecund world. Passing by, the current tugs distractedly at my legs before swirling on to its downstream destinies. The river is all there is.

On evenings like this, when the water is too warm for trout that are better adapted to the cold of mountain water, it’s not right to go fishing. Fortunately, nor is it necessary. Where the fate of rivers is concerned, may we all work to ensure we’ll always have that choice.