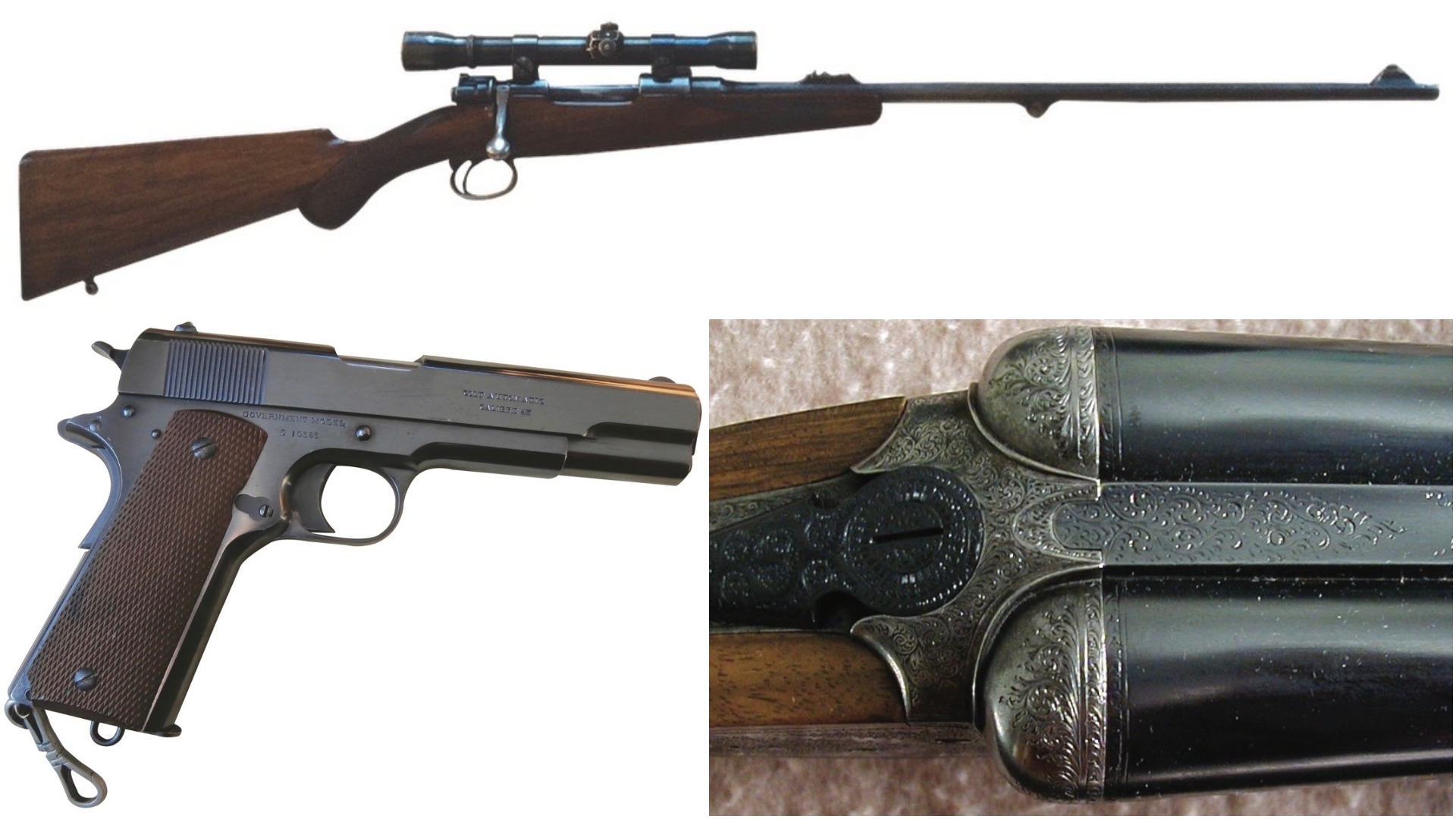 One of these heirloom firearms is worth more than $25,000

Outdoor Canada readers submit a Jeffery shotgun, a century-old Rigby rifle and a WWI Colt pistol to our appraiser 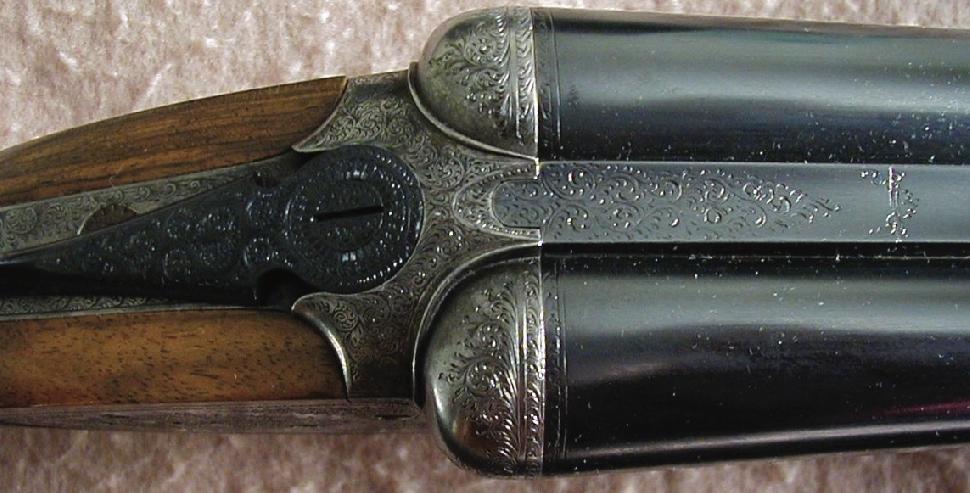 I own a side-by-side 12-gauge Jeffery shotgun, which was made in England (above). I won the gun in a countrywide Ducks Unlimited fundraising contest in 1988. At that time, it was valued at $15,000. It has two sets of barrels (26- and 28-inch), but it did not come with its original case. Could you provide any additional information, as well as the value? I am wishing to sell it.

That is a beautiful shotgun from the prestigious British gunmaker W.J. Jeffery & Co., which makes high-quality double rifles and shotguns to this day. Your shotgun may have been restocked by Pachmayr, though I don’t believe this would reduce collector value. The Pachmayr name was highly respected for the quality of workmanship.

Prices for new Jeffery shotguns start at more than $50,000. Your gun is a sidelock, which increases the value, as does the second set of barrels. Shotguns of this quality don’t come on the market very often. Those I see on U.S. websites have asking prices of $15,000 to $20,000, and that’s with just one set of barrels.

There aren’t many shooters/collectors in Canada who have the means to afford such prices, and finding them is not easy. Your best bet would be to sell it through a firearms auction (see www.outdoorcanada.ca/gunauctions). It would be one of the star firearms at any auction, and would no doubt be well publicized. There are U.S. dealers and collectors who keep tabs on Canadian gun auctions, so they’d likely be among the bidders.

At a Canadian auction, I’d expect it to bring in the neighbourhood of $20,000, plus or minus $5,000 or so. I know this is a fairly broad range, but guns of this quality don’t sell in numbers high enough to establish a more precise value. It will depend on how well the auction is publicized, along with various factors such as the state of the economy.

A few years ago, I inherited this .275 Rigby rifle from my father-in-law (above). I contacted Rigby with the serial number (4124), and the company sent me a ledger stating the rifle was purchased by an English army officer on August 29, 1913. I have had the privilege of shooting three deer, a bear and a moose with this 105-year-old rifle. It has a lot of sentimental value, but I’m wondering what it might be worth and where it might be properly appraised. Your assistance is greatly appreciated.

Doug, this is one of the tougher questions I’ve had, partly because of my personal biases. I appreciate all types of firearms, but most of all I like rifles—my favourites are hunting rifles—and of those, I most admire classic sporting rifles. They just don’t get any more classic than a century-old Rigby sporter!

The .275 Rigby HV (high velocity) cartridge was a proprietary load developed by Rigby using the 7×57 Mauser cartridge case with a 140-grain bullet. The cartridge and rifle were greatly admired by discriminating sportsmen of the era, including such famous personalities as W.D.M. Bell and Jim Corbett.

The rights to use the Rigby name have been acquired by another company, which is also now producing several high-grade custom rifles. Its Highland Stalker is very similar to your rifle. Prices vary with custom details, but typically run around £5,000 ($9,000) the last time I checked. Yours is a very handsome rifle I’d love to own, but as a collector, I find it more appealing for its illustrious history.

There are a few things that might reduce its appeal to collectors, however. The finish appears worn in places, though to me, such signs of careful use and wear aren’t a big issue. Then there are the scope bases and rings, which I doubt were added by Rigby, and it appears the safety was altered to work under the scope tube. While the scope makes the rifle more practical for hunting, most collectors would rather it hadn’t been altered.

Rifles such as this rarely come on the market ,and there are few if any comparable sales to help with estimating its value. I can only make a rough estimate, but I think it would bring $5,000 to $7,500, if not more, at a well-publicized gun auction. There’s no way to establish an accurate value except by seeing what the market would pay. If it were my rifle, the only way you would be able to buy it would be from my estate! 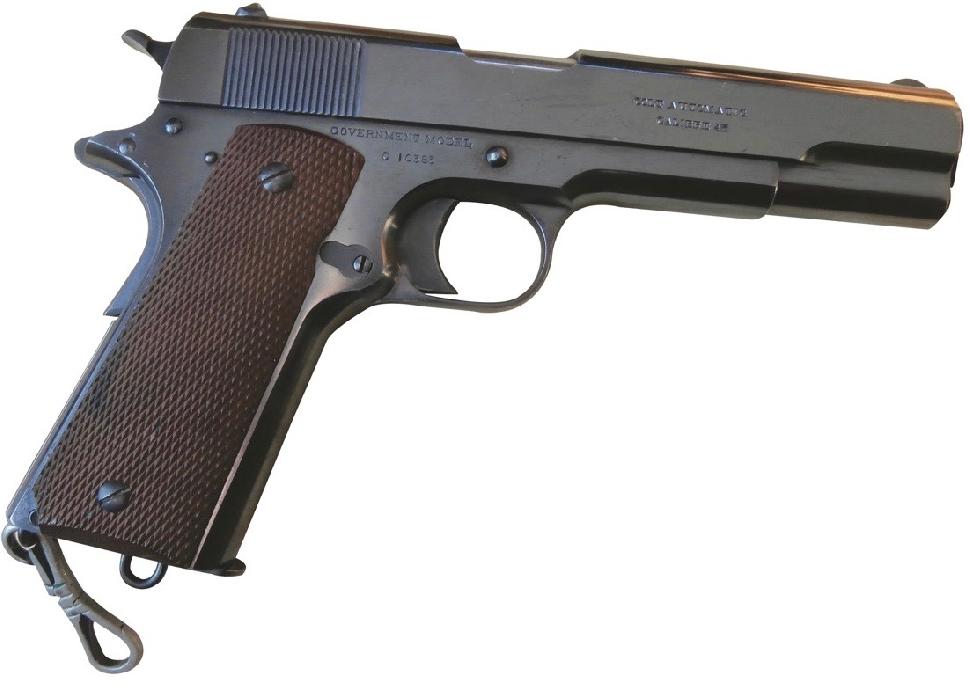 My grandfather, Major W.J. Morrison, served as commander of the Eaton Machine Gun Battery during the First World War. As you have noted previously, officers had to purchase their own kit during that war. Despite pressure to acquire a Webley, my grandfather chose the Colt 1911 in 45ACP calibre (above). It’s a Government Model, with the serial number C10383. The last patent stamp is in 1913. My grandfather had his name engraved on the firearm when he held the rank of captain.

My son has expressed a wish to own this sidearm. As his name is the same as his great-grandfather’s and as he recently acquired a restricted firearms licence, it seems appropriate that he will be the next owner. Any assistance you could provide as to the value of this firearm would be appreciated.

I’ve seen quite a few photos of these Canadian Colt 1911s from the First World War, but I don’t recall seeing one in as nice a condition as this one. Clearly, it has been very well cared for over the 100-plus years since it was made, and I’m sure you will continue to give it the same level of care.

The history of these pistols has been quite well documented. When Canada declared war in 1914, all sorts of weapons fell into short supply as the number of soldiers rapidly increased. The Canadian government purchased 5,000 Colt 1911 .45 ACP pistols that had been manufactured for commercial sale, hence the “C” prefix on the serial number. These commercial pistols had a high-quality polished blue finish, rather than the parkerized finish of pistols made for military contracts.

These guns were shipped to Canada in batches as they became available. Based on the serial number, yours was one of 1,000 shipped on either October 31, 1914, or November 7, 1914. The guns were shipped to H.W. Brown in Quebec, and made available for purchase by Canadian military officers. Many officers had their name and rank engraved, typically on the right side of the slide. This is the first such gun I’ve seen with the engraving on the mainspring housing.

I suggest you obtain a factory letter from Colt, which will show any information available from Colt’s archives, such as date of manufacture, date of shipping and to whom it was shipped. The fee for a factory letter is around $100; for a historical pistol such as this, it’s worth it. Write to Colt Archive Properties, LLC, P.O. Box 1868, Hartford, CT 06144.

As a collectible without a Canadian military connection, a 1911 in similar condition would likely bring $2,000 to $3,000 at an auction, perhaps more if there were U.S. collectors among the bidders. With its documented military connection, your gun would easily bring more than $3,000. It’s a valuable piece of Canadian history, as well as a family memento. I congratulate you on keeping it in your family. 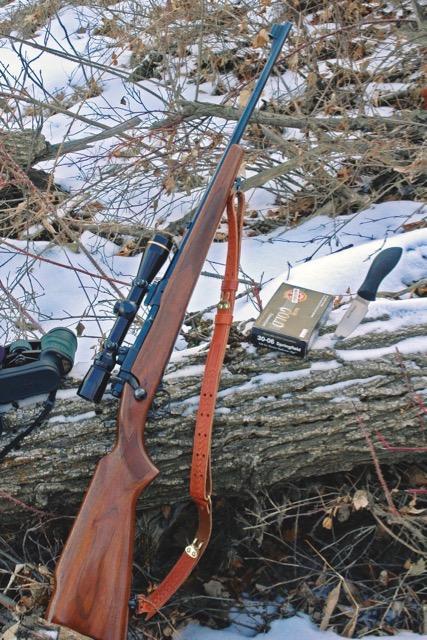 The original Winchester Model 70 rifle was made from 1937 to 1963. After the new Model 70 was introduced, pre-1964 Model 70s immediately became collectible. A few have been featured in this column before, including my Westerner .264 Win. Mag.

Over the last decade or two, values seem to have stabilized for many pre-1964 Model 70s. Only the less-common rifles have continued to increase in value, such as new-in-the-box models, those in near 100 per cent original condition, and models chambered in a rare cartridge.

The rifle pictured here is a .30-06 Featherweight I bought in the mid-1970s for around $700. Ten years ago, I saw an almost identical rifle sell for $1,200. Judging by prices I see online and at gun shows, however, I’d be doing well to get that today. There are several reasons for this. For starters, younger shooters today aren’t as influenced by the pre-1964 mystique. And if they want a Model 70, they’d probably opt for one of the new production models, which are outstanding in quality. Some older collectors are cutting back on their collections, meanwhile, or (gulp!) dying off. Personally, I don’t see myself getting rich off my little collection, but at least they’re still great hunting rifles.