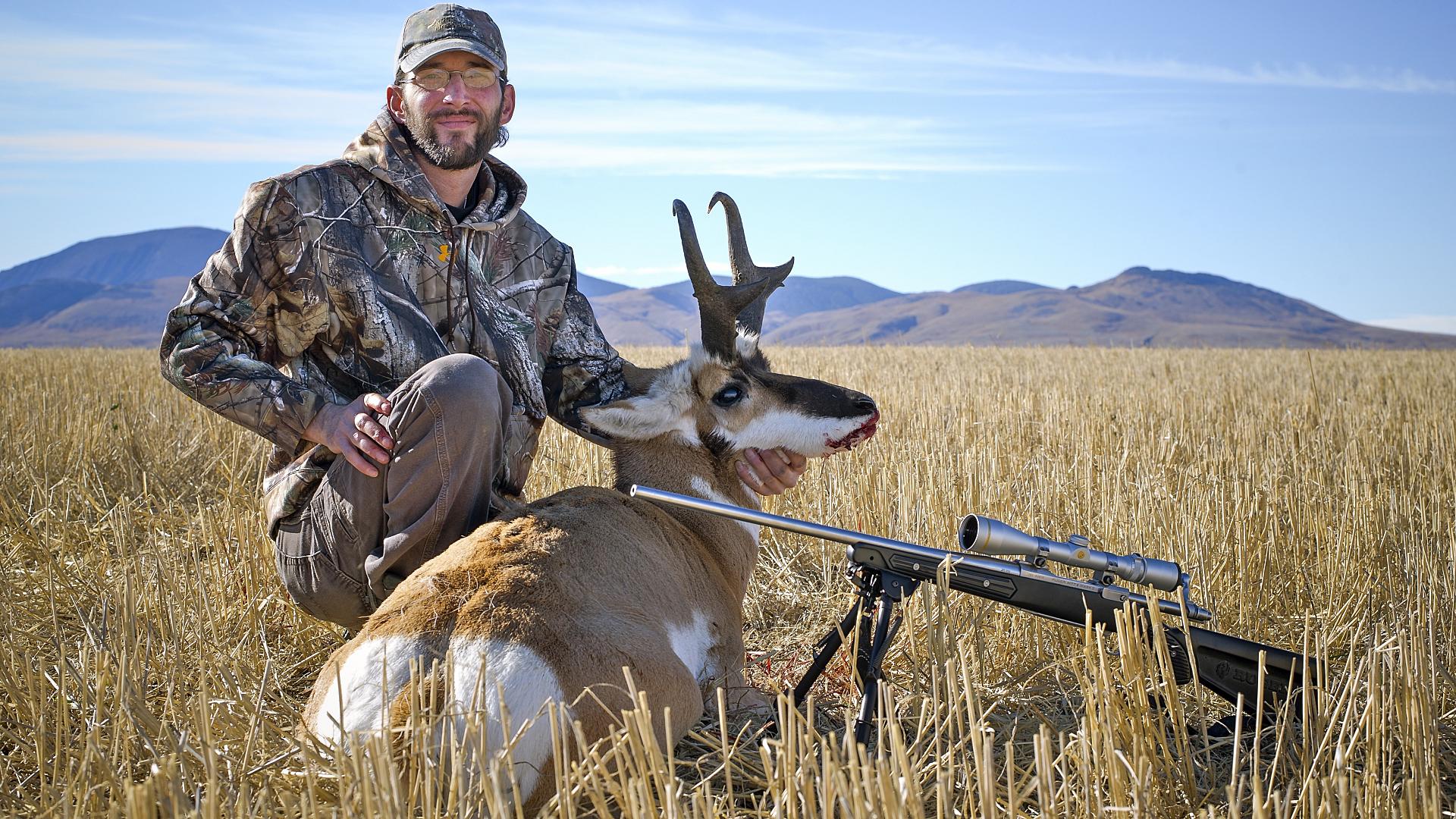 Pronghorn primer: How to fill that coveted antelope tag

Everything you need to know to fill that coveted antelope tag

With their excellent vision and terrific speed—they can hit 88 kilometres an hour—North America’s very own pronghorn antelope make for an exciting and challenging hunt. Here in Canada, they’re only found in southern Saskatchewan and Alberta, where tags are getting more and more difficult to obtain every year. But that only that makes hunting them all the more special.

And it’s a type of hunt that compares to no other in Canada, providing non-stop action—just be ready for the adrenalin to flow. Here’s everything you need to know about the different methods and gear for pursuing these unique animals (see “One of a kind” below), and what to do once you’ve succeeded.

Pronghorn typically live in hot, dry areas, which is why water sources can make for productive hunting hot spots in the early season when temperatures are still high. Sloughs, dugouts and livestock watering holes are great options to set up over using a blind or a tower-style stand. This method is popular among bowhunters, with shots usually ranging from 20 to 30 yards

Typically, a buck can be quite wary when it first comes to the water. But if you remain motionless for a few minutes—even if you’re in a blind—it will often ignore you, giving you all the time in the world to prepare for a shot. This is not the case, though, when the rut starts to kick into full swing. Instead, bucks will run in, take a quick drink, then run off again to chase does.

Once the rut is on, using a decoy (above) is one of the most exhilarating—and simplest—tactics for antelope hunting. It can be as easy as creeping over a ridge, throwing up a decoy and watching a pronghorn come running from several hundred yards away.

You don’t even need to use a decoy that looks like the real animal. I’ve accompanied a very successful antelope hunter who wears a white T-shirt and flashes a white handkerchief to lure in pronghorns—he’s harvested several record-class animals using this method. Antelope let their guards down during mating season, and they think the flash of white could be another buck.

Timing is everything when using decoys. Before you even think about setting one out, you need to know where the pronghorn are located and you need to be ready to take the shot. When an antelope decides to come in to the decoy, it can take as little as a few seconds for it to be practically on top of you. For this reason, it’s best to hunt with a partner who can work the decoy while you concentrate on shooting, or vice versa.

If you’re trophy hunting, be sure to take the time to look over the animal before attempting to decoy it into range—it’s next to impossible to properly field judge a buck in the split-second you have before it’s time to shoot. Shots will typically be within 40 yards, so decoying works best during the bow season. Some hunters try during rifle season, but it’s not as productive.

You can spot-and-stalk hunt any time during the fall antelope seasons. It can be an especially effective tactic during wet periods when watering holes are not very productive. And in the weeks following the rut, when most rifle seasons take place, it’s the preferred method because it’s relatively easy to get within 200 yards of a pronghorn.

Antelope have very keen eyesight, and they can be wary at the best of times, always on the watch for predators. They often only need to see a slight movement to go on red alert and prepare to run. When attempting to stalk within range, therefore, try to use the topography and vegetation to stay hidden, especially if you’re bowhunting. The key is to remain patient—even if it means spending the better part of a day to get within shooting range of a mature buck.

All forms of antelope hunting start and end with your optics. When hunting watering holes, you first need to glass them from a distance to determine if any animals are in the area. When decoying, glassing ahead of time is just about the only chance you’ll have to decide if a buck is worth shooting. And with the spot-and-stalk tactic, the name says it all—you first need to be able to spot the animals on the open prairie before stalking in on them.

As with any hunting gear, get the best optics you can afford. You need to be able to glass vast, open country, as well as contend with the shimmer of hot air rising off the plains. You can’t avoid seeing heat shimmer, but with cheap glass it will be next to impossible to field judge a distant animal, let alone determine if it’s a buck.

Once you located a distant buck with your binoculars, a spotting scope with either a tripod or window mount is essential for field judging. This can make for a lot of extra weight if you’re hiking, rather than hunting from your vehicle, but it’s worth it.

Since it can take more than 10 years to draw a pronghorn tag, you want to ensure you can properly field judge a buck if you plan to trophy hunt. While challenging, field judging pronghorns is manageable if you examine three main things: total horn length, prong length and horn mass.

When you’re looking at the overall length of the horn, use the buck’s ears as your gauge. In order to make the record books, the buck should have an overall horn length of 2½ to three times the length of its ears, which average 5½ inches.

The prong length is usually easier to judge. If the prongs stick out more than twice the width of the horns when viewed from the side, you’re typically looking at a good length. Also look for bucks with prongs up high on the horns. This makes for a larger circumference below the prong, which can help boost the overall score.

Finally, you need to field judge the mass of the horns. Since a final score includes four circumference measurements from each horn, the more mass the better. For a record-book animal, the base of the horn should appear at least twice as wide as the buck’s eye when viewed from the side, giving it a circumference of roughly seven inches. (For more tips on field-judging antelope go to www.outdoorcanada.ca/pronghorntrophy.)

Once your buck is down and it’s time for field care, your priorities should be to ensure both the meat and the cape—assuming you plan to mount your trophy—are properly handled.

After I shot my first antelope, I grabbed the buck’s hide to move it into position for some photos, only to come away with two large handfuls of hair. At first I thought there was something wrong with the animal, but later learned that was normal. The downside with figuring this out on my own was that I ended up with a huge clump of hair missing from part of the cape, which I’d planned to mount. The takeaway here? Handle with care.

As for the meat, it’s crucial to cool it down as soon as possible so that it doesn’t spoil, especially since you’ll likely be out on the warm prairie. The solution? Always have an ice-filled cooler at the ready. If that’s not possible, find a creek or river to cool the meat in, then get it on ice or into a refrigeration unit as soon as possible. That way, you’ll be sure to enjoy not just the trophy, but also some tasty meals.

One of a kind

While its scientific name Antilocapra americana translates to American antelope goat, the pronghorn is neither an antelope or a goat. With its long legs, short tail and long snout, in fact, the pronghorn bears more of a resemblance to deer. Indigenous to North America, this even-toed ungulate is the only animal on the continent with branched horns instead of antlers, which adorn both males and females. Its name comes from the odd shape of the horns, with their forward facing prongs. The second-fastest land mammal after the cheetah, the pronghorn ranges from southern Alberta and Saskatchewan down through the western U.S. and into northern Mexico. It has a distinctive white patch on its rump, which it flashes to the herd if it senses danger. A typical adult stands roughly three feet tall at the shoulders and measures 4½ feet long; a buck weighs approximately 110 pounds, while a doe will top out around 80 pounds.