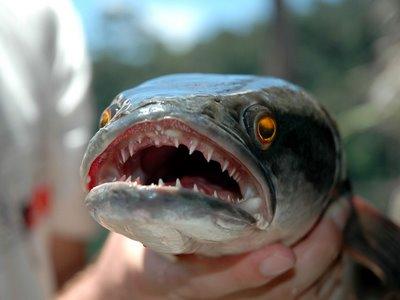 A toothy and aggressive aquatic predator, capable of breathing air and slithering across land, has put a scare into Prairie fisheries managers.

Recently the Saskatchewan Ministry of Environment was tipped off about someone in the province selling the northern snakehead via an online ad on Kijiji.com. Now the provincial government is moving to immediately ban the import, possession and sale of all aquarium fish considered aquatic invasive species, including the snakehead.

“Currently, we have regulations that deal with other invasive species; however, the regulations historically have not applied to aquarium fish, [since] most of them are tropical fish that will not survive in Saskatchewan’s climate,” said Environment Minister Dustin Duncan.

Although no northern snakeheads have been found in Saskatchewan’s lakes and rivers, wildlife officials believe the species is capable of surviving in the province. The fish is native to China and Siberia, but can survive in North America because of its broad temperature tolerance, and ability to hibernate at the bottom of water bodies for up to six months.

Northern snakeheads are very aggressive predators and could out-compete native fish like walleye and northern pike for food, threatening their survival. They also carry the deadly “red spot disease” (epizootic ulcerative syndrome), which can spread to other freshwater fish.

“If someone purchases this at a pet store and brings them home for an aquarium, these fish grow to be a metre long,” said Tanya Johnston, an aquatic ecologist in the fish and wildlife branch. “And at some point they might find they can’t keep it so they’ll release it to one of our water bodies,” she said in an interview with the Saskatoon Star Phoenix.

Until the ban can be put in place, the ministry has asked the public not to purchase the northern snakehead. Ministry officials have also asked pet stores throughout not to import or sell the fish.

Find out more about the northern snakehead and plans to stop its spread at Fisheries and Oceans Canada and the US Geological Survey.